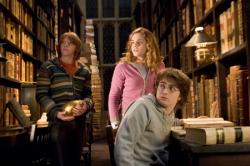 Rupert Grint, Emma Watson and Daniel Radcliffe in Harry Potter and the Goblet of Fire.

Harry Potter and the Goblet of Fire isn't just the best Harry Potter movie so far. It's also one of the best movies of the year. It's fast paced, action packed and faithful to the books, even while trimming quite a bit of the plot elements. Where The Prisoner of Azkaban began the departure from page to screen, Goblet of Fire truly finishes the transition so that the movies are finally standing on their own as great entertainment.

In this, Harry's fourth year at Hogwarts, the usual classroom lessons and teenage angst is disrupted by the announcement that the Triwizard Tournament will be held at Hogwarts. This wizarding world equivalent to the muggle Olympic Games involves students from different schools of magic competing in a series of tasks designed to test their burgeoning knowledge and skill.

To that end, Hogwarts is visited by groups from two other schools. From both of them, as well as from Hogwarts, will be chosen a champion to compete in the event. After each champion is picked, to everyone's surprise (apart from those who've read the books), a fourth name floats from the Goblet of Fire (which is the method used to select the champions), and that name is Harry Potter.

Over the course of the year, there are two other things that Harry is forced to deal with. One is his growing interest in girls, including a crush he's developing on a certain girl, Cho Chang. And the other is the dreams he keeps experiencing involving Lord Voldemort.

Along with the usual cast of characters, there are several new ones introduced in this story. Cedric Diggory is the first champion chosen for Hogwarts. Tall, good looking and popular, he's everyone's favorite to win the tournament, and he even manages to take Cho to the Yule ball instead of Harry. Viktor Krum is another of the champions chosen, from the Bulgarian school. Stern and fierce, he has his eyes set firmly on Hermione, much to Ron's dismay. Rita Skeeter, played wonderfully by Miranda Richardson, is the poison penned reporter for the Daily Prophet, who's motto seems to be, never let the truth get in the way of a great story. And perhaps most entertainingly, Mad-eye Moody is the new Defense Against the Dark Arts teacher this year, and his magical eye and slightly off-kilter behavior live up to his nickname.

However, the greatest addition to the cast is Ralph Fiennes as the resurrected Lord Voldemort. His casting was truly inspired as he perfectly encapsulates the pure essence of evil that the long talked about, but never seen, Dark Lord is meant to represent. The climactic scene between Harry and he shows just how far these movies have come and shows that it's not just the child actors that are growing up, but the storylines and the danger as well.

Much of the credit for the success of this movie has to go to director Mike Newell. Although he's best known for Four Weddings and a Funeral, this has to be his best work yet. Although purists might complain that too much is cut from the book, there would be no way that the entire weighty tome could have been faithfully transposed from page to screen. Instead, the film retains the essence of the story and all of the vital plot points and so whisks the story along, despite a 2 and a half hour running time. The film also has a much darker tone and a more mature atmosphere that shows clearly why this is the first Harry Potter to receive a PG-13 rating.

So far, every Harry Potter movie has gotten better than the last. With The Goblet of Fire, Mike Newell has set the bar so high, that I don't know if it will be possible for anyone to surpass it. 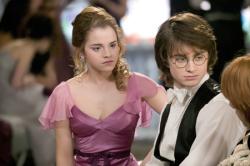 Emma Watson and Daniel Radcliffe in Harry Potter and the Goblet of Fire.

Goblet of Fire is good, and it has a great finish, but I don't think it's a better movie than Prisoner of Azkaban. In that movie the ever evolving relationships between Harry, Ron and Hermione seemed effortlessly entwined with the adventure they experienced. Goblet of Fire has less soul. Visually it dazzles the eye, but emotionally it didn't pull me in as much.

The story is just too much for one movie. This book could easily have been made into two movies. Some of the scenes that didn't make the cut from page to screen are missed. For example the developing mother/son relationship between Mrs. Weasley and Harry, especially the scene at the end where she gives him a reassuring hug, would have added some poignancy. And the characters of Viktor and Fleur, both of whom were vividly depicted in print, are rendered one dimensional onscreen.

The plot is part of the problem. In the other movies Harry is often in real danger throughout most of the school year. In this one, up until the final thirty minutes or so, the only dangers he faces are in the Triwizard Tournament. The dragon scene and the underwater section are great to watch, but neither one generates any real tension.

However, from the moment Harry and Cedric enter the maze together all of the movie's problems dissipate in the fog.

The climax to Goblet of Fire is by far the best one yet. It is darker, scarier and more edge-of-your-seat than any of the previous endings. And Ralph Fiennes is a chillingly perfect Lord Voldemort. 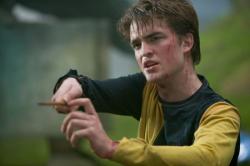 Robert Pattinson in Harry Potter and the Goblet of Fire.

As someone who has only seen the movies and never read the books, I have to say that the plots are becoming repetitive. Does the Defense Against the Dark Arts teacher always have to be so integral to the plot? Does Harry have to meet new people every movie who already know who he is and are completely impressed by him? Am I the only person bored with the fact that he knows and finds out more than his professors? Every movie finds Harry in danger by Voldemort, then has some angst and then an action climax. Perhaps none of the directors are sticking around to keep directing the series because they have all realized that they would just be redirecting the same movie every time?

The only thing that changes throughout the series are the ages of the main characters. They are slowly growing up and in this movie puberty is hitting them all. However, other than Harry and Ron having a spat and the three friends taking an interest in the opposite sex, they just keep repeating what they do each school year. For example: Harry has to have a confrontation with Malfoy once a year. Hermione has to have a scene where she shows how smart she is. Ron has to have a scene where he is scared or humorlessly uncomfortable.

The Harry Potter movie series is becoming boring. Harry and Voldemort confront each other in this movie but nothing is resolved. We must wait for the next installment to once again be teased by Harry and The Dark Lord playing their game of cat and mouse. I enjoy seeing the three friends grow up but the whole repetitiveness of Voldemort threatening Harry has become tiresome. Get on with it! Other than the hints or romance, this movie has a complete been there done that feel. This will be the first Harry Potter movie that I will not purchase on DVD.