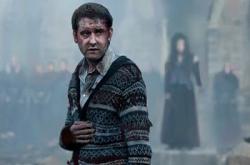 As a non-reader of the Harry Potter novels, (yes there are some) I was genuinely getting a bit bored with the movie series.  The plots tended to repeat themselves, with little points of development of the characters as they were growing up.  Whereas I got lost in what was sometimes going on, I always maintained a fondness for the characters.  As this is their final adventure, I was anxious to see them for the last time.

The previous films constantly threw new characters, monsters and magic items at the audience.  I am not embarrassed to say that I often forgot one movie to the next.  I am sure if I had read the books I would have retained more information, but these are movies and the viewer should not have to read the books to enjoy them.

For me, Deathly Hallows part 2 is the most enjoyable film in the entire series.  Other than a bit of talking at the beginning of the film, the movie races by with action, battles and some deaths.  It is well over two hours long but it felt like half that time.  My sons and I wanted it to go on.

The special effects team worked overtime.  Hogwarts becomes a battle field of good wizards and bad wizards, giants and stone guards and huge spiders.  There is a dragon and explosions and lots of fire.  I have seen war movies with less inflicted damage.

Although this all leads to Harry's final confrontation with Voldemort, each character gets a moment.   Ron and Hermione share a desperately romantic kiss. Mrs Weasely dishes out some Mama anger.  "Not my daughter, you BITCH!"  Luna proves helpful.  Neville finally comes into his own.

My favorite bit of acting is when Hermione turns herself into Bellatrix.  Helena Bonham Carter has Hermione's mannerisms down.  Otherwise, Bellatrix has little to do in the film. Like the rest of the movie, I wanted more.

Of course my favorite scene of them all is the last one when we see the main characters now grown.  Sure J. K. Rowling created these people, but through the books and movies they have become all of ours.  Seeing them through these stories has been like watching my kids grow up.   The final scene shows them all getting on with life, much as I hope for my own children one day.  So long Harry Potter, it has been nice knowing you. 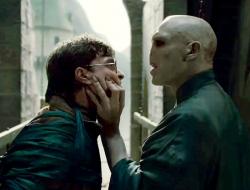 Daniel Radcliffe and Ralph Fiennes in Harry Potter and the Deathly Hallows: Part 2.

Talk about going out with a bang! This movie is virtually all action.  For 10 years now we've watched these kids grow up, having adventures and the movies have grown up with them. They've gone from slavish attempted replicas of the books to well-done movies in their own right.  Deathly Hallows: Part 2 is a very fitting finale and a great way to say good-bye to the boy wizard who is no longer a boy.

For sheer entertainment value and action, I have to agree with you Eric. This is the most enjoyable film in the series. It's all been building up to this. Because we've known and loved these characters for so long, there's no need for a lot of exposition, we can just get on with the action. We all know who Hagrid is, as an example, and so we get the emotion when he hugs Harry without needing dialogue. We know what it means to see Hogwarts blown to hell.

The Harry Potter filmmakers had the difficult task of producing a series of movies that would please the millions of fans of the books, but would still be entertaining to those who haven't read them. Being a reader of the books myself, I've enjoyed the references to the more obscure characters and events that are sometimes mentioned in the movies, but I have wondered sometimes if they didn't try to include too much, leaving non-readers wondering why they mentioned this or that character. I've always felt that the movies never really explained horcruxes explicitly enough, for instance. Also, several characters are killed in this movie and while I felt each one of their deaths in the book, they've only been very minor characters on film and won't mean nearly so much to those who've never read them. However, if this leads to more people and especially children, turning to the books to learn more, than that's only a good thing.

A fondness for the characters, as you say Eric, is the real secret to this series' success. I rewatched the last few films in the series before going to see this one and while I knew the ins and outs of the plots and what was going to happen every step of the way, I wasn't bored because I still enjoyed the interactions between the three main characters. Eric, you say the plots repeated themselves, but in a way that was kind of the point. These books and movies are comfort food, not exotic dishes. Readers and filmgoers wanted to know what they were going to get. There was always enough fresh in each of them to make them entertaining, but nothing wildly different. Aren't most movie series, the same?

The special effects team worked overtime, indeed! Nothing is held back at all as the good versus evil battle is played out with Hogwarts as the battleground. I can't be certain, but at one point I think I even saw the kitchen sink go flying by. Several times Harry runs through the school on one mission or another and the battle that goes on around him fills every inch of the screen. It will take several viewings just to pick up all of the details. And for a movie series that started out aimed at little children, the battle is not blood free and people do die.

Like all good action movies there needs to be moments when the audience goes, "Yeah!!!" in unison when something exciting happens and this movie doesn't disappoint. There were three different moments when the packed audience I saw this movie with burst into spontaneous applause.

The finale is bittersweet. It's incredibly satisfying, but it is also a good-bye to old friends. Sure, we can reread the books and we can rewatch the movies, but it will never be quite the same.

The adventures of Harry, Ron and Hermione are now complete. What began in those uncertain months following the attacks of September 11, 2001 has ended just a few months before the tenth anniversary of those horrible events. 2011 fittingly saw the demise of Osama Bin Laden and Lord Voldemort. The two villains – one real, one imagined – that dominated the world’s consciousness for the past decade are now gone. Sounds like truly the end of an era.

I agree wholeheartedly with my brothers! This final Harry Potter movie is a smash-bang winner. The action comes fast and furious and it captures the emotional impact of the book quite well also. The CGI effects are good without taking over the movie.

Eric you mentioned the similarities of the previous movies and Scott is correct that this was somewhat intentional. The point was to watch these characters grow up and deal with the issues of each new school year while gathering strength for the inevitable showdown with Voldemort. Like the Bond movies or virtually any other film franchise there were certain things you could count on with each movie. Like how was Harry going to get to school and who the new Defense against the Dark Arts professor would be.

This all changed with Harry Potter and the Deathly Hallows part 1. Harry, Ron and Hermione found themselves suddenly thrust out in the adult world dealing with issues they had never previously had to face. That movie made a good transition for this final installment, which (as was written above) goes out with a bang indeed!

There are two characters in particular (played by two brilliant actors) that I have to mention. They are my favorite professor at Hogwarts, Minerva McGonagall, played by Maggie Smith, and the guy I think of as the real hero of the story, Severus Snape, played by Alan Rickman. These two both have their finest hours in this movie.

McGonagall’s comes when she sends Snape fleeing from the school (this was when the audience I was with erupted into loud cheers) and then she says the spell to free the giant statues to defend Hogwarts. She then quips a line about always wanting to say that spell.

SPOILER ALERT: Snape’s moment comes when he is killed and Harry takes his memories to the pensieve. Harry finally learns the truth about Snape and Harry’s mother and just why Dumbledore trusted him so explicitly over the years. Rickman gives a stand out performance and I wouldn’t mind seeing him get an Oscar nomination for Supporting Actor.

This scene had the biggest emotional impact for me. Although I must admit the moment that affected me most in the book is missing from the movie. It was when Harry first enters Dumbledore’s old office after killing Voldemort and all the old headmasters in their portraits on the walls begin loudly applauding for Harry. Reading that scene put a lump in my throat and it was a mistake not to include it for the big screen.

Harry Potter and the Deathly Hallows part 2 was a long time coming but now it is here. The end of this cinematic saga is truly bittersweet. Like you Eric I loved the final scene. It really brings the story full circle and tells so much in just a few moments. Thanks for a great decade of entertainment Harry Potter!