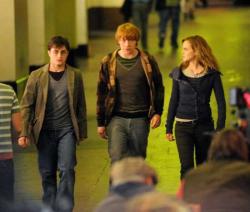 The Potter kids have grown up.

It has been 9 years since Sorcerers Stone began the franchise; the Harry Potter kids are now young adults and this movie is therefore darker and bleaker than any of the previous installments. It stays fairly true to the first half of the seventh and final Potter book, but because of that fact it is also the only one in the series that feels unfinished.

It starts (like the first six movies) in July shortly before Harry’s birthday. As he is not yet 17 he cannot apparate and disapparate. Lord Voldemort is now openly reaping havoc on both the wizard and muggle worlds. The plan to get Harry to a safe place is to have many of the other characters drink polyjuice potion to disguise themselves as him. The idea being that the Death Eaters won’t know which one is the real Potter.

This makes for an exciting action sequence early in the movie and like the book the seriousness of the situation is clear from the very beginning. Sure there were deaths in previous movies but this one ups the ante quite a bit and anyone that has read the book knows that the 2nd part of The Deathly Hallows will go even further in this direction.

Harry, Ron and Hermione are out in the world evading Voldemort and his troops while searching for the remaining Horcruxes. Ron has a falling out with Harry and Hermione and there is one rather poignant scene near the end. The problem with this installment is that the first half of the book is more like a series of random adventures with no real story arc.

The fact that none of the movie takes place at Hogwarts and there is no new professor (unless you count the one victimized by Voldemort at his macabre dinner party) really sets this Potter apart. Clearly we are heading towards the finish line at last. 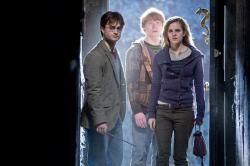 Like the book it's based upon, this movie is a dramatic departure from the earlier installments in the series.  As Patrick hinted at, all of the first six books followed a set pattern, covering one year of school at Hogwarts, always including a new Defense Against the Dark Arts teacher, Harry's birthday, Quidditch matches, etc. etc.  Almost none of those traditions are even mentioned in this film.  I actually quite enjoyed this movie, as I did the book, but it really differs from any of the earlier stories.

Without a doubt this movie does lack the traditional three act story arc.  Harry, Ron and Hermione are searching for the Horcruxes and they find several; each one being a short adventure of its own.  I've always felt that the real joy of this series though is the interaction of the three main characters and so the lack of plot structure didn't bother me and there is definitely enough going on so that you will never be bored.  I do wonder though how more casual fans will like this movie as it really doesn't recap anything that came before.  The filmmakers expect that you will know all of these characters and all of their motivations and things like what a Horcrux is.

Radcliffe, Grint and Watson have all grown as actors.  Watson, who was always the weakest actor of the trio, does a much better job here than she has done in previous films.  Of the supporting cast, Bonham Carter is a standout as the deranged Bellatrix Lestrange.  She is almost the only person besides the main three who makes an impact since like the usual plot devices, the normal supporting cast is also mostly absent or only appears in vastly reduced parts.

The look and feel is much darker this time around.  For nearly the first time there's a real sense of danger and foreboding to the proceedings.  As Patrick mentioned, characters are killed and maimed this time and there's more to come in the next installment.

While all the differences from earlier Potter films might be jarring, I also think that it brings a breath of fresh air to the series.  It makes me wish that Rowling had taken the characters beyond the confines of Hogwarts and the Harry Potter formula much more often.

I have never read any of the books in their entirety.  As such, I have a hard time remembering some details from one film to the next.   I like the three main characters and of course root for them every step of the way.  The problem with this movie is that damn little happens for a film that lasts 146 minutes.

The only significant plot advance is that Voldemort gets a new wand.  Seriously, that is it.  Sure they destroy a horcrux, but so what?  The entire idea of those is just a stall tactic on the way to inevitable climactic battle.  Ron and Hermione have a little tiff.  Whoopee!  Harry gets a sword that he already had.  They sneak into the Ministry of Magic, in the film's lightest moment.  There are a few action scenes, but honestly this could have all been edited down to 30 minutes without any key plot details being left out.

The worst scene for me, and possibly anyone who never read the books, is when the elf dies.  He has only been in a couple of films for a couple of scenes.  Harry breaks down into tears as if he was a major player in the series.  Perhaps he has more to do in the books, but he is nothing more than a minor, forgettable character in the movies.  It was as if the film makers wanted an emotional ending so they built up this one death as if it meant so much more than it really does.

Breaking this book into two movies does not seem like a great idea now that I saw this first half.   It spends more time on shifting locations than it does plot.  The most interesting part of this whole movie was Hermione's magic bag and the tent.that appears small on the outside and big on the inside, but Doctor Who has been using that gimmick for decades.