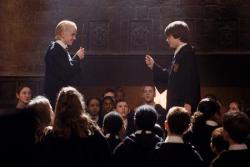 Tom Felton and Daniel Radcliffe in Harry Potter and the Chamber of Secrets.

In my review of Harry Potter and the Sorcerer's Stone, I was little lavish in my praise, and deservedly so.  Chris Columbus had the difficult task of adapting one of the most beloved books of modern times into a movie.  The end result as we now know was a modern movie classic.  So the question was, could he do it again.  The answer is a resounding yes.  In fact, this second effort is even better than the first go around.

The plot to the second book isn't quite as well known as the first book, so for those who haven't read it, or are a little foggy on the memory of it, here it is.  The movie begins during Harry's Summer break after his first year at Hogwart's School of Witchcraft and Wizardry.  He's disappointed that he hasn't received word from any of his friends from school.  One night he receives a mysterious visitor, Dobby the house-elf, who tells him that he must not return to school or something bad will happen.  It seems that Dobby has been intercepting all of Harry's mail to convince him that no one likes him and that he'd be better off staying home.

Harry knows that Hogwarts is his home, and so he ignores Dobby's warning and is relieved when his best friend Ron shows up, along with his brother's Fred and George, in a flying car, to take Harry back to their house for a few days before school starts again.

On the journey to school, Harry and Ron are blocked from entering train platform 9 3/4 and are forced to take the flying car to school, as shown so often in the previews to this movie.  But soon they are at school and we are introduced to all of the school regulars and a few new people.  There's the wonderfully shallow and conceited Gilderoy Lockhart, the new Defense against the Dark Arts teacher, played to smarmy perfection by Kenneth Branagh.  He gets some of the funniest moments of the movie with his cocky self-assurance and self obsession.  We are also introduced to Moaning Myrtle, the ghost who haunts one of the girl's bathrooms, whose been dead for fifty years.

Since this is Harry Potter, you know of course that it won't be all happy reunions.  Where ever Harry goes, trouble soon follows.  This time it shows up in the form of a bloody warning written on a wall, informing everyone that the Chamber of Secrets has been opened.  This warning is accompanied by a mysterious voice that only Harry can hear, and soon one by one, students are being petrified.  And of course it's up to Harry, Ron, and Hermione to unravel the mystery.

So what makes this movie better than the already great first movie?  There are several things.  Like the books, each movie seems to be maturing a little.  It's darker, scarier, and funnier.  There are several creepy moments, especially the ones involving the giant spiders and the whomping willow tree.

The actors are also maturing.  Not only are they older, but they are more relaxed in their parts and it definitely shows in their performances.  There has been some talk in the media lately, that the three young stars might not make it through all seven of the planned movies.  I certainly hope they do.  They are now deeply engrained in my mind as the characters.  Any change would definitely take some getting used to.

There's more action in this movie and the special effects have improved.  This is particularly true of the Quidditch match.  In the first movie, it was at times pretty obvious that they people on broomsticks were computer generated.  This is not the case this time.  The scene with Harry and Draco racing after the golden snitch is the best whizzing through close quarters seen since Return of the Jedi.

Finally, since the main characters and the world they live in was introduced in the first movie, this time, the action can start right away.  And the action never lets up.  Although this movie is 2 hours and 41 minutes long, not once did I get antsy or look at my watch.  This is a movie that flies by and leaves you wanting more.

Completely enjoyable by all ages, I repeat what I said about The Sorcerer's Stone, Harry Potter is pure entertainment!

Emma Watson in Harry Potter and the Chamber of Secrets.

Harry Potter And The Chamber Of Secrets is a nice fast paced ride that takes way too long to get to it's predictable conclusion. The special effects are better. The movie is more action packed. It is just so damn long.

Harry starts his second year of school at Hogwarts. Something is petrifying students. Of course, it is up to Harry, Ron and Hermione to solve the problem. I mean, we can't expect the teachers, who are full wizards, to do it.

J. K. Rowling's books are all fairly long and lovers of the books would probably throw hissy fits if any of these things were left out. However, those of us who are just casual Potter fans have a bit of a hard time sitting through two and a half hours of fantasy.

I have not read this book but could still see where so much of the plot was going. The ending, although scary for youngsters was so damn pat that it was almost anticlimactic. Earlier in the movie we are introduced to the Mandrake root, so we know how the petrified people will be saved. Earlier in the movie we meet a Phoenix who's tears can heal. Gee, do you think that might come into play later?

In all fairness, I like this movie. What I didn't like were the suspense scenes. We know Harry, Hermione and Ron will live till the next book so suspense is minimal and actually pointless.

The fun in this movie is Harry, Ron and Hermione just interacting. I enjoy this movie the most when it is just them going through everyday routines of being wizards in training. Their friendship for each other is enduring. I look forward to the rest of the movies. I do not look forward to their particular adventures. I just want to see how these friends get on in life. This movie has just the slightest suggestion of some romantic friction between Hermione and Ron. I can't wait to see how all of their relationships play out. If I have to sit through some drawn out adventures, so be it. 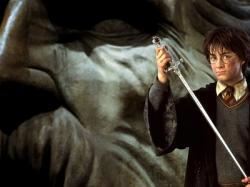 Daniel Radcliffe in Harry Potter and the Chamber of Secrets.

Something is missing in this second installment in the Harry Potter movie series. It is a by the numbers movie that is starting to feel a bit forced. Don't get me wrong, Harry Potter and the Chamber of Secrets is still damn fine entertainment, it is just that these movies must be held to a higher standard than your average movie. And in that light it is time for them to stop trying to simply bring the written word to the screen. A bit of story editing is essential to keeping the franchise vibrantly alive. Some of the most successful book to movie adaptations of all time made considerable changes to the original story. Gone with the Wind and The Wizard of Oz being the two most obvious examples. In my opinion, the next Harry Potter movie needs to do the same thing.

The rhythm and pacing of a movie is very different from a book. For one thing most people don't read a book all the way through in one sitting like you view a movie. I agree with Eric that the need to include nearly every chapter from the book really causes the thread of the central mystery to unravel. Every time we learn something new about the Chamber of Secrets we have to sit through another scene of character development and small talk. And the Quidditch match in this one should have been left on the cutting room floor. It is one thing to imagine the kids on broomsticks as we read about the game but much less enjoyable to watch it. Ditto the scene with the basilisk. After all, no matter how good technology gets a movie can never allow us to get as close as a book where we are actually inside the character's heads, experiencing what they are experiencing.

Still for all its flaws Harry Potter and the Chamber of Secrets does bring the story to life, and is obviously satisfying millions of fans of the book. The actors are even better in this one than the first movie and there are more laughs. In the long run, though, it is a mistake not to edit the written content to be more movie friendly.