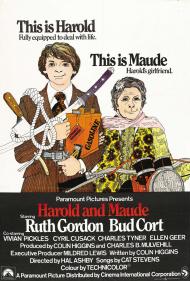 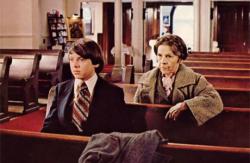 Bud Cort and Ruth Gordon in Harold and Maude.

Harold and Maude has become a cult film over the years. It remains one of the weirdest but also most touching love stories ever in a movie. Harold is young, rich and obsessed with death. He attends funerals for fun and stages elaborate suicides in places where his mother will find him. One day, at a funeral, he meets 79 year old Maude and his life will never be the same.

The free-spirited Maude teaches Harold how to have fun. He learns to sing and dance and do somersaults. Their relationship doesn't stop at friendship however. It evolves quite naturally into a love story. I won't give away the ending I'll just say it's a bittersweet one.

This movie also has some very funny moments. Harold's mother decides it is time he got married so she arranges for him to meet different single women through a computer dating service. Harold scares them all away with his suicidal pranks. Except for the last one. She hilariously assumes that Harold is acting when he pretends to stab himself with a Japanese sword and she immediately begins doing Juliet's death scene. Maude's confrontations with the police are also wonderful.

These two central characters are painted with such broad strokes that in lesser hands they would have become caricatures. But Bud Cort and Ruth Gordon give such marvelous performances that they make Harold and Maude incredibly real people, a bit odd perhaps, but very real.

The entire movie is underscored with songs by Cat Stevens. These happy, bouncy, rock-n-roll tunes set just the right tone.

Today this movie seems a quaint relic of the times, at least in terms of style. Back when it was released it was quite hip. A pot smoking, car stealing senior citizen was cool and the authority figures are all very stereotypical and one-dimensional. The priest, the shrink, the military uncle, they all represent the society that the counter-culture was railing against. 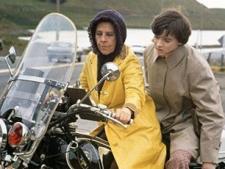 Harold is a very lost young man, from a extraordinarily rich family, who is too stupid to know that he is able to do anything he wants. The whole point this feel good movie is trying to make is that happiness does not come from money or the established institutions, but from within. Of course it helps to be rich because Harold is never bogged down by a job or worried about how the bills will get paid because he does not have any bills to pay. He has all of his time to do whatever he wants. Maude survived the holocaust and has many decades of life under her belt. She teaches Harold to just enjoy life. Why is it, rich people in movies always need to learn how to live from poor people? Think Titanic.

I found Harold to be entertaining at times. My favorite scene was when the priest describes Harold and Maude having sex. I also liked Harolds last blind date. However, I garnered no sympathy for him. Here is a young, healthy man with more money than some countries at his disposal, yet he acts as lost as a blind man in a desert.

Patrick may have liked the songs by Cat Stevens, but they caused me to groan every time they came on. “If you wanna sing out, sing out. If you wanna be free, be free.” They sound like they should be on Sesame Street.

Harold and Maude is really just one of those late 1960s early 1970s social movies that contained some supposedly shocking relationship. Think of the inter-racial relationship in Guess Whose Coming to Dinner or the inter-religious marriage of Katie and Hubbell in The Way we Were.

Here, a very old lady has sex with a young man and in the course of spending time with her, he learns to be happy. Sex being the catalyst for a young man to view the world differently is hardly a novel concept.  It seems a little funny at first but then just plain illogical.

The ending is a copout. It should have ended with Maude turning Harold’s proposal down, as someone of her age would know that although the affair benefitted them both, a marriage would be pointless. Although you should sing out when you wanna sing out and be free when you wanna be free, you also have to friggin grow up. It is the one important lesson Maude never teaches Harold.