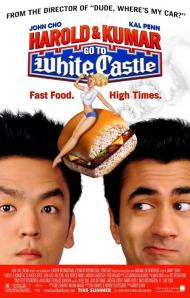 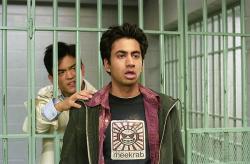 John Cho and Kal Penn in Harold and Kumar Go to White Castle.

The American dream has been portrayed many different ways in cinema. Rarely has it been done so creatively. Harold and Kumar Go to White Castle is a humourous coming of age stoner flick. It is about two second generation Americans who have to deal with how they fit into the American landscape and how they can score some major weed.

Harold, a Korean American; and his roommate, Kumar an Indian American, smoke some marijuana one night and decide the only thing that can satisfy their munchies is some White Castle hamburgers. They start their journey for burgers and self discovery in Hoboken New Jersey but end up in places unknown in their endless search for sustenance and drugs.

Harold is a shy investment banker who is in love with a girl down the hall of their apartment. Kumar is being pressured by his father to go into medicine. In this one night of life changing discovery, they get arrested, ride a cheetah and have their car stolen by Neal Patrick Harris, playing Neal Patrick Harris.

Many others recognizable stars pop up in the movie. Chris Meloni, as Freakshow, is the stand out cameo. He plays a tow truck driver who picks up the boys after they crash their car. He has boils all over his face and makes dumb Jesus references. "It's gonna take me a while to fix up your car there, so if you boys like, you can go on inside, get yourselves something to drink, wash up, fuck my wife, watch TV - anything you want. Mi casa es su casa. Just don't do anything the Good Lord wouldn't do."

By the end of the movie the boys have decided to make those big decisions about the girl next door and medical school. A little pat and unnecessary. This movie is really not about maturing. It is about being at that great age in America, where you can do such stupid things and not worry too much about the consequences. 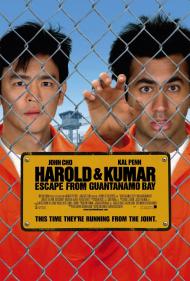 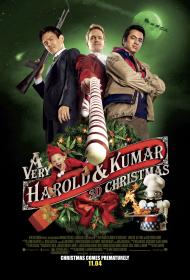