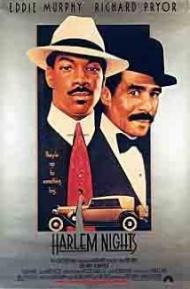 In 1989 Eddie Murphy was one of the biggest movie stars in the world. So when he decided to write, direct, produce, and star in a movie set in Harlem in the 1930s, Paramount let him. Murphy had always wanted to do a period movie. Up until then all of his films had been set in contemporary times. He had also always wanted to work with his idol Richard Pryor. Then to go one better, he got comedy legend Redd Foxx, in what would be his final movie role. A hit at the box office but savaged by critics Harlem Nights has moments of hilarity in a decidedly unoriginal package.

The plot is crammed with every gangster movie cliché since the days of Jimmy Cagney. It opens in 1918 where a seven year old boy saves the life of his mentor. Cut to twenty years later. Richard Pryor looks exactly the same but the boy has now grown up to be Eddie Murphy. Pryor plays Sugar Ray a nightclub owner (think Humphrey Bogart in Casablanca). Murphy's name is Quick. He's Sugar Ray's right hand man. They get involved in a strictly by the numbers battle with a mobster named Bugsy Calhoune (Michael Lerner). There's the stereotypical crooked gumshoe played by Danny Aiello and a boring femme fatale underplayed by Jasmine Guy. (remember her?)

Redd Foxx is in charge of the craps table only he's blind as a bat and needs very thick glasses to see the numbers on the dice. Della Reese runs the adjoining whorehouse. She's one tough old broad. Together, and separately, they provide many of the biggest laughs. The most famous scene is where Della Reese fights Eddie Murphy in the alley and he winds up shooting her in her pinky toe.

Arsenio Hall has one extended scene that's quite funny. He plays the brother of a gangster who was killed. He mistakenly assumes that Quick did it. He and two henchmen chase Quick through the streets of Harlem (really the Paramount back lot). They corner Quick and send a barrage of bullets his way. One of the henchman only has a little single shot handgun. Hall plays the entire scene in crying hysterics. The punchline is when Quick stands up and kills all three of them with ease.

Lela Rochon has a small role as a prostitute so-nicknamed Sunshine because, “Her pussy is so good, if you threw it up in the air it would turn into sunshine.” To demonstrate this fact there's a scene where she has sex with a married man. After she leaves, he makes a phone call, “Yeah, get me Hollycourt 55377. Hello, it's Daddy. Hey, darling. Put Mommy on the phone. Yeah, Barbara, it's Richie. Yeah lookit, I ain't never coming home no more. Take it easy.” Stan Shaw as the brain-damaged stuttering Champ is also worthy of a few guffaws.

Sure the plot is stale as day old bread, and the direction lackluster. Eddie Murphy was nominated for Worst Director and Worst Screenplay at the 1989 Razzie Awards. He lost for director but won for screenplay, or maybe that's the other way around? To date Murphy has never directed another movie. Harlem Nights did manage to garner a single Oscar nomination, Joe I. Tompkins for Best Costume Design (he lost to Phyllis Dalton for Henry V).

Harlem Nights, for all its flaws, has enough moments of true hilarity to qualify as a minor comedy classic. The fact that Eddie Murphy, Richard Pryor and Redd Foxx share the screen together for the one and only time in their careers is reason enough to watch it. That and to see Della Reese steal the movie away from all three of them.