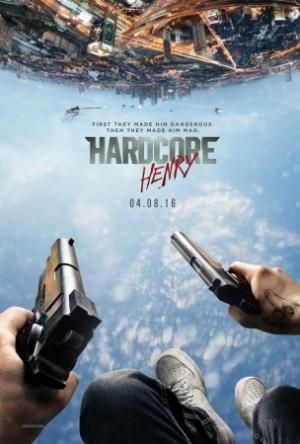 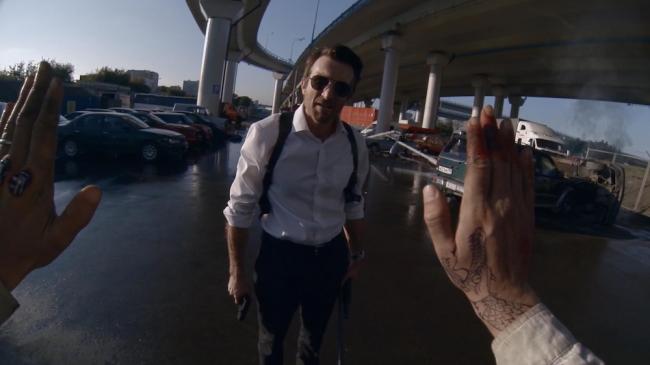 Hardcore Henry is a Russian independent film picked up by a studio from the festival circuit and given a wide release. The big gimmick being that it was entirely filmed from the main character's point of view. That is to say, you only see what he sees. Other than an obscured reflection, we never see what Henry ever looks like. Notice that in the credits, no one is even listed as playing his part. It was done by a bunch of stuntmen. Although the POV angle is selling the movie, it is hardly an original idea. In Dark Passage (1947) the first hour is only shown through the lead characters eyes, or shots of him with bandages on. When he finally has his bandages removed, we, and Lauren Bacall, see that the lead is none other than Humphrey Bogart.

Hardcore Henry begins with a man, who has no memory of anything prior to this moment, strapped to an operation table with a foot and hand missing. A gorgeous woman calls him "Henry" and tells him they are married and that she is helping him. She attaches a prosthetic hand and foot. Just before she can install a vocal device to allow Henry to speak, some baddies break in and he and his wife run for their lives. They are soon separated and Henry begins a quest to find and rescue her from a man who, somehow, has telekinetic powers. Henry runs into "Jimmy" every where he goes. Sharlto Copley plays Jimmy in a series of different costumes and disguises and dies several times throughout the film. All of that gets explained later. This is a science fiction film after all.

From almost start to finish, Hardcore Henry is nothing but one action scene after another. The gore is very plentiful and the action continuous. Some scenes are over the top. OK, plenty of scenes are over-the-top and some just have to be seen to be believed. There is a twist or two that are not real shocking and it all ends on a great note. My video game playing twenty year old son loved this film as it is basically a first person shooter game with lots and lots of death, some lovely naked women in a brothel and a pace that never lets up.

As far as plots go, there is not really one to speak of. Henry wakes up and tries to figure out what is going on. Cue running, jumping, shooting, stabbing, shooting, naked breast, outrageous stunt, shooting, blood splatter and some more shooting. Henry alone kills well over a hundred people, at least. At one point, "Jimmy" tells Henry about 35 men are approaching their location. I counted that many kills before another group just as large shows up to be slaughtered. Yeah, this is a teenage boys dream film.

Although the actors who play Henry do not get any credit, he must have been played by some truly athletic stuntmen and parkour enthusiasts. He jumps off roofs, scales buildings, hangs from a helicopter, gets into all kinds of fights and never stands still long enough to catch his breath. It could be guessed that Henry not speaking was an artistic idea to allow the audience to more easily imagine themselves as Henry. It could be that or it could be that once an actor speaks a line, I believe his wage scale goes up tremendously. Thus Henry worked for stuntman wages, which I am guessing are less than acting.

Hardcore Henry is an exercise in brainless excitation.