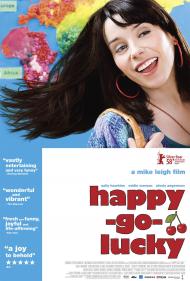 Sally Hawkins has to be in the running for an Oscar this year.

In Happy Go Lucky, British director Mike Leigh's latest film, Sally Hawkins gives what could be the performance of the year as the constantly chirpy central character, Poppy. If she doesn't at least earn an Oscar nomination for this part than she will have been robbed.

This slice of life movie focuses on Poppy, a primary school teacher who is constantly upbeat and cheerful. She's so overly happy and laughs at everything that at first she's annoying, but her continual happiness despite what life throws at her becomes over the course of the movie, quite charming and delightful. We probably all know someone like her; one of those people who can't bear for their to be a silence or lull in a conversation.

There isn't so much a plot to the movie as a series of events. The one central story is Poppy's weekly driving lessons that she begins taking after her bike is stolen at the beginning of the story. Her driving instructor is snappy, angry, bigoted and pretty much a dick. Only Poppy who wants to make everyone happy would stick with such an insulting and difficult instructor. As the movie goes along, her decision to stick with him seems like a worse and worse one as he becomes increasingly erratic and potentially dangerous.

Mainly though this is a character study of Poppy and we see her go about her life as a teacher. Her and her flatmate go out, Poppy takes dance lessons, deals with a problem student in her class and visits her family. All mundane things but filmed entertainingly and with great humor. What drama there is, is just below the surface and in Poppy's eyes. Occasionally we are shown a crack in her joyful demeanor, but it is soon gone as her front is put back in place.

Most of the credit for this movie must go to Sally Hawkins. Her naturalistic performance makes the more showy performances of say, Angelina Jolie in Changling, look like acting. In my mind she's the one to beat for the Oscar this year. The Golden Globes thought fit to nominate her, I only hope the Academy follows their lead.

The best part of the movie were her driving lessons. I did not see the instructor, Scott, as so much a dick, but Poppy’s polar opposite. Here is a man who is angry for what ever reason, and takes it out on those around him, whether they deserve it or not. Whereas my brother wrote that everyone probably knows someone like Poppy, I bet everyone, definitely knows someone like him.

Scott is a person who just wants to get through life. Every little moment is not some enjoyable little tidbit to be savored. Poppy gets under his skin with the silliest little comments. When Scott tells her to, “Bear with me.” She responds, “Is there? Where is he?” Scott’s best line is, “The American dream never happened. The American nightmare is already here. I mean, look at the Washington Monument. It is 555 feet above the ground and 111 feet below the ground. 555 plus 111 is 666. 6-6-6, Poppy. 6-6-6!”

Her little confrontations with Scott were the movies bright spots. Even when Scott is getting madder and madder, Poppy just keeps the smile on her face. At one point Scott gets so upset over Poppy wearing boots he thinks she should not drive in, he turns off the car and gets out. Poppy just looks out at him and pleasantly asks, “So that’s it then?”

Unfortunately, Scott is not in the entire film, and the rest of the movie does not have the same friction, without him to balance her cheery disposition. The movie as a whole is not a great film, but Poppy is the most optimistic, agreeable, and slightly annoying, person since Elwood P. Dowd talked to an invisible rabbit. 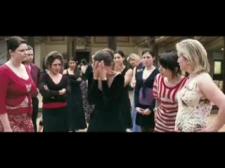 The Flamenco dance instructor was funny.

Sure the acting is good, but quite frankly, I couldn’t wait for this movie to end. I didn’t like Poppy at all. I also didn’t like Scott. In fact I didn’t like anyone in this annoyingly dull, slow-paced and uneventful movie. Wait I take that back, I did like the flamenco dance instructor. She was funny. Since this movie has no plot to speak of, and is, as Scott wrote, a slice-of-life character study; then it is essential that the main character be likable or at least interesting. Poppy is neither. I also found the direction to be a bit pretentious. I am not a big fan of slow, lingering shots. It is as if the director is saying “I just know my characters are so riveting that you will want to watch them walk down a street or row a boat for an extended period of time”. No thanks. Watching this movie made me feel the opposite of the title.