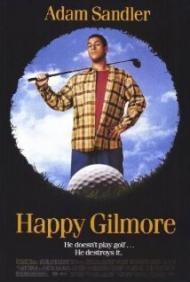 To this day, Happy Gilmore is still remembered as the film where Bob Barker beat up Adam Sandler. It is a classic scene to fans of either star, but the film has more to offer than just that. Of course, it really helps to be a Sandler fan.

Happy Gilmore is a likable loser. He tries out every year for a local hockey team and every year fails to make the team. He is appropriately aggressive but cannot skate to save his life. He was raised by his grandmother who loses her home and possessions to pay for her back taxes while she is sent to a nursing home. While at her home with the movers, who just found his grandpa’s old golf set, Happy discovers that he can drive a golf ball four hundred yards.

This leads to him joining a local contest and eventually a golf tour and tournament, all in the name of winning enough money to get his grandmother out of the nursing home and back into her own house. Along the way he makes an arrogant professional golfer, Shooter McGavin, into a rival. He falls for a reporter, fights an alligator and gets his ass handed to him by a game show host during a charity match.

Happy brings his hockey attitude to the golf links. He is casual where everyone else is formal. He is loud and crass; throwing fits when he does not play well. This attracts a new breed of fans to the golf course. A frustrated Shooter yells at them, “Damn you people. Go back to your shanties.”

Although Sandler is a talented comedian, one of his greatest assets has always been his ability to attract other comics to his films. Today, with his own production company, he has his usual gang of friends that come and go from his movies. Even though this is a pre-Happy Madison production, he still had familiar faces stealing scenes in small roles.

Although Barker’s cameo is the most talked about, my favorite supporting character is Hal L. the sadistic orderly at the nursing home, played by an un-credited Ben Stiller. He is cruel to the old folks under his care. He forces them to make quilts during “arts and crafts time” that he sells for personal profit. When one of the elderly women complains, “My fingers hurt.” Hal L responds, “Oh, well, now your back's gonna hurt, 'cause you just pulled landscaping duty. Anybody else's fingers hurt?... I didn't think so.”

As you may guess, I found my way to this film through my teenage son. Sandler has always had an appeal to young male audiences. His humor is almost always juvenile, even to this day. So with that said, if you can laugh at the Three Stooges and think WWE is an entertaining show, Happy Gilmore, as well as most Sandler films, are for you.