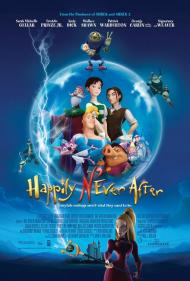 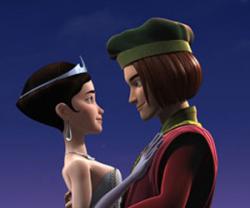 Ever since Shrek turned old fairy tales into modern movie gold, other films have been trying to copy it. First their was Hoodwinked! Now there is Happily Never After. Both contain the most overused voice actor of the past 5 years, Patrick Warburton.

Happily Never After starts with the notion that a wizard guards over all the fairy tales ever written. His job is to make sure they all continuously play out as they should. Before you can say Fantasia, the wizard leaves on vacation and his two incompetent assistants screw everything up. The wicked step-mother takes over the kingdom and all the bad guys from every fairy tale run amuck.

The movie is narrated by the castle dish washer Rick. He is in love with Cinderella who is, of course, madly in love with the Prince. Once the wizards assistants change everything the plots to all of the fairy tales change. The bad guys win. The Prince runs off and Rick gets a shot at Cinderella.

Weaver's evil step-mother is the stand out character. She hams up her lines like every villain before her. What makes her character most notable is that she is drawn with the most bodacious animated body since Jessica Rabbit. Her rear end and bosom nearly make this movie PG13.

The plot takes a while to get going and once it does it never really gets a good head of steam up. It moves along at a moderate pace and never really gets as clever as it thinks it is. The seven dwarf put on fatigues before doing battle. The witches brooms look like the speeders that Luke and Leia drove in Return of the Jedi. The one character to garnish any laughs is Warburton's Prince. He is utterly clueless and must consult a fairy tale book to make any decision. I guess there is a reason why Warburton's voice appears in so many animated films.