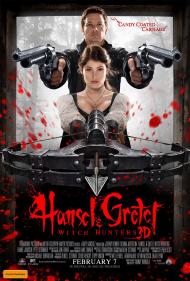 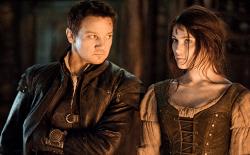 Jeremy Renner and Gemma Atherton as Hansel and Gretel.

Hansel and Gretel: Witch Hunters is the most fun to be had in theaters this year. Of course that may not sound like a great comment as we are only a month into the year. Having watched so many Oscar contenders lately, this was a very nice change of pace.

As the movie starts, we meet little Hansel and Gretel, the two famous children of the fairy tale. We see them find the house in the woods made of candy and meet and kill the witch inside who intends to eat them. The film then jumps years into the future where Hansel and Gretel have become famous witch hunters for hire. As children they are about a year apart in age, as adults they are clearly nowhere near the same age. Renner is some 15 years older than Arterton.

The story proper gets moving when Hansel and Gretel arrive at a village that has had a rash of children abductions by witches. They investigate and do battle with the witches. They also discover that something big and threatening is brewing in the witch world and only the siblings can stop them.

Although based on a children's fairy tale, this film is rated "R" . It features the "F" bomb, a little nudity and all kinds of blood and gore. For me, the most unsettling aspect of the film was when Renner would punch a woman repeatedly. Okay, so he is punching an evil witch but it still seemed to lack chivalry.

Although the movie runs along, one witch encounter after another and we look forward to all that is to come, the film missteps in a huge way. Hansel and Gretel have absolutely no personality. The plot delves into their history. A plot device is introduced solely to cause a dramatic moment for Hansel near the end. Yet, I am stumped to name one personality trait in either sibling.

Renner is good in the action scenes but when a beautiful woman makes a move on him he grins like a school boy seeing his first tit. Arterton for her part is hot. Nuff said about her. Famke Janssen has stated in interviews that she only did this role for the money and it shows. She does not exactly phone in her performance, but she hardly plays it up either.

By the end of the film, Hansel and Gretel have collected a couple of followers and made it clear that a sequel is open if the money rolls in for this one. With all the over-the-top gore, occasional humor and quick fantasy pacing, I will see it. Hopefully the writers can come up with some characterization for Hansel and Gretel in the meantime. 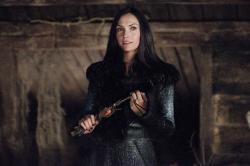 This movie has been getting far more bad press than it deserves. Sure, it has its problems, but as Eric pointed out, it's also action packed and fun. Like him, I found it to be a nice escape from all of the serious Oscar nominated films that I've been plowing through these past few weeks.

Noomi Rapace was originally attached to play Gretel. While she's still 9 years younger than Renner, she does look closer in age to her co-star than Arterton does. Perhaps though, Gretel's witch blood keeps her looking youthful. As the character of Hansel is written, though, perhaps he should have been played by a younger actor rather than aging Gretel. As Eric mentioned, Hansel acts like a blushing virgin when approached by a pretty girl, which seems odd for someone of Hansel's age. He looks like Han Solo, but behaves like Luke Skywalker.

When I saw that Will Ferrell and his partner Adam McKay were producers on this film, I wondered how much comedy there would be. While there's more adventure than laughs, there are still a few comic moments. These are mostly derived from the combination of modern technology and sensibilities with a centuries old setting. Hansel and Gretel's weapons are of the steampunk mold and certainly bear no resemblance to weapons of the 16th or 17th century where presumably this movie takes place. Likewise, Hansel's diabetes and their young groupie seem out of time. There are even notices about the missing children attached to the old fashioned milk bottles that are sold in the market.

Despite the critical drubbing this movie has received, it did manage to open in first place. And, thanks mainly to the overseas box office, it has managed to turn a profit. Still, a sequel at this stage seems unlikely. If one does get made, like Eric, I will happily go and see it. Perhaps next time though, writer/director Tommy Wirkola should stick with directing and give the scriptwriting duties to someone else. Maybe then we could keep the action and sense of fun, but also gain a smarter story.