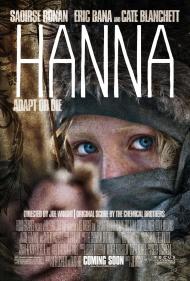 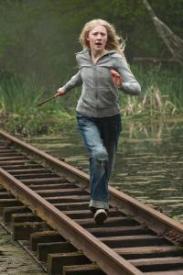 Saoirse Ronan runs for her life as Hanna.

Saoirse Ronan continues her impressive climb to stardom as the eponymous and deadly Hanna. She is not your average sixteen year old. Hanna was raised by her father (Eric Bana) completely cut off from civilization in the wilds of Finland, some 60 miles below the Arctic Circle. Oh and he trained her from birth to be a cold-blooded assassin. The opening scene shows Hanna stalking and killing a deer with a bow and arrow.

The plot is best not explained in too much detail. I’ll just say that Hanna soon finds herself escaping from a CIA run underground bunker in Morocco and then being chased across the Mediterranean to Spain and eventually to Germany, where the climax takes place. Along the way she befriends a family of British tourists, has a very unusual first kiss, and kicks some serious butt. Eventually we learn the truth about her background.

Eric Bana, of whom I am not normally a fan, is good here as Hanna’s equally deadly father. He is, at least, less stiff than I have seen him in other roles. He and Cate Blanchett make formidable foes that were once covert agents together. Blanchett (sporting a severe red haircut) hams it up with an American Southern accent. She clearly gets the campy aspect of the heightened reality in which this movie takes place.

Ronan, as the star, carries the movie effortlessly. She handles the action scenes as well as the more light hearted ones like a seasoned pro. Hanna speaks many languages and can rattle off impressive facts and figures but is clueless in social settings. I’m sure Ronan trained for this part; she is in great physical shape as she proves by doing an inordinate amount of running.

The time she spends with the British family offers comic relief from all the violence and danger. During a meal Hanna tells them her mother is dead. The British mom asks what she died from. Hanna’s deadpan response is, “Three bullets.”

Hanna has a stylish look and a great soundtrack by The Chemical Brothers. Their thumping beats underscore the action scenes and add to the energy level. There are, of course, plot holes to be nitpicked if one is of a mind to do so.

Hanna is a swiftly moving, adrenaline filled, action flick with a skinny-blonde-teenage-pixie-heroine. I rather enjoyed it. 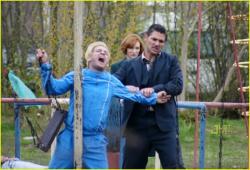 Hanna is publicized as an action film and it works best in that genre. The problem is that the film does not stay focused on that. Twice it misses an opportunity for an action scene. Early on, soldiers enter the cabin where Hanna beats up/kills two of them. It is not shown happening, we just see the bodies afterwards. Another scene has Erik climb out of some water to face two police men we are later told he killed, but we are not shown him doing it.

If this was to hurry the film along, I would not have minded. However, the film has some rather dull filler, such as when Hanna sits and watches some Spanish folk singing and dancing. I understand it is to show her witnessing such things for the first time, but it stops the film cold.

Her first date and almost kiss caused laughs from the audience. Her time spent with the British family are the movie's lightest moments, and the film's most charming. Hanna learning to communicate with others is entertaining. Watching her watch other people is not.

The ending is a let down. You follow this girl through so much, that you expect her to get something great out of it at the end, but she ends up no better off than when she started. The questions all get answered, but she ends up a loser. Writing 101; the harder the character's struggle, the greater the character's reward. Not the other way around.

I agree with Patrick on the soundtrack. A couple of songs really stood out. My son went online to listen to them as soon as he got home. It is not a good sign for a non musical film to have the music be the most memorable part of it. 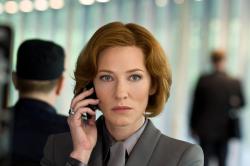 If the soundtrack were the most memorable thing about this movie it would indeed be a problem.  While I agree it's great and adds to the action scenes, the character of Hanna is far more memorable than the music. Ronan is terrific in the part and I would gladly see her reprise the role in a sequel.

Eric, you also exaggerate the pacing of Hanna's "date". The whole thing takes up probably less than 5 minutes of the whole movie, with the Spanish Dancers a mere portion of that. To say it stops the movie dead is vastly overstating it, especially when you say it correctly yourself that the whole point is to show Hanna witnessing life and color for the first time.

I also have to disagree with you about the ending Eric. Perhaps it's not the most upbeat, happy of endings, but I found it to be completely satisfying. It has a great symmetry to it and Hanna's character arc feels complete, but also leaves room for more.

Eric Bana does do an okay job, but I still find him to be a pretty bland actor. He doesn't do anything here that any other male action star working today couldn't have done. I certainly didn't feel that he brought anything extra to the part.

Blanchett, on the other hand, delivers another great performance. Her accent does take some getting used to, but she plays the villain quite well. My favorite moment of her's is when she's interviewing the British family and when she comes to the little boy, her hypocrisy just drips from her mouth and she seems like some witch from an old fairy tale ready to cook the boy and eat him.

This is Ronan's movie though and as you said Patrick, she carries it easily on her diminutive shoulders. Her performance and the work of director Joe Wright, and the editing of course, really sell the idea that this small girl can kick some serious ass. And because of her humanizing of the character, you also care about her, even when she's a killing machine.

There are several questions left unanswered about Hanna's background and the motivations of certain characters are never fully explained. While it would have been nice to have more of those details made plain, it didn't hurt my enjoyment at all.

With its stylish filming techniques, modern soundtrack and a young girl in the lead, Hanna is a modern twist of a thriller.