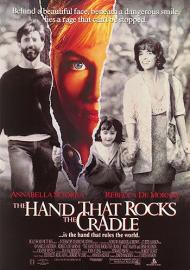 Oh no she did not!

This is one of those it's so bad that it's actually pretty good movies. The plot is filled with melodrama and some pretty cheesy dialogue, and yet it offers enough thrills to satisfy in a very base and visceral manner.

Annabella Sciorra plays Claire Bartel, a suburban wife and mother living in Seattle. At the beginning of the movie she is pregnant with her second child and is sexually molested by her OB/GYN. After she reports him and several other women come forward, he commits suicide. His widow loses her house, her money, her reputation, her baby and her sanity quite quickly following his death. Six months later and his widow poses as a nanny and gets hired by Claire. Her plan is to get revenge upon the woman whom she sees has having ruined her life.

It doesn't take long for the Nanny to start putting her plan into action. She starts by making Claire's children like her, even going so far as to breast-feed Claire's baby. She then tries to make Claire think that her husband is cheating on her. As the movie goes on her actions become more violent and psychopathic leading to the ultimate showdown between the two women.

Clearly this movie is aimed at the female audience. The two male leads in the film are quite stupid. Ernie Hudson of Ghostbusters fame is actually playing a mentally handicapped man (in what must be one of the most embarrassing performances ever), while Claire's husband is just an idiot. There can be no other explanation why he is unable to even suspect what the nanny is up to. No, this is clearly a female revenge fantasy of which men have very little part to play except as chess pieces in the game between Claire and the Nanny.

To be fair though, Claire herself isn't very bright either. Near the beginning of the film she complains that she can't find anyone whom she'd trust with her children, but then very quickly hires and invites into her home, a virtual stranger with no references or proof of her child-rearing abilities. It also takes her a very long time to figure out what is going on.

It is De Mornay as the villain who steals the movie. Claire and her husband are such clueless yuppies with their incessant Gilbert and Sullivan that you are almost rooting for her to succeed. She plays her part with icy calm but you can see the insanity just beneath her eyes. One thing I kept noticing is how she looked a little like a younger more attractive Hillary Clinton. There's something about the shape of her face and eyes that reminded me of Hillary. Maybe that's why she's able to be so scary.

This is definitely one of those guilty pleasures. You have to accept the plot holes and flimsy setups and just sit back and enjoy the cheesy goodness. 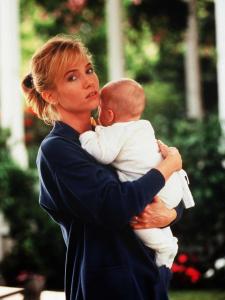 Peyton is one of the nicest female villains to ever grace the movie screen. She actually gives Claire hints as to what her intentions are. When she gets interviewed, she tells her that her husband was murdered, "They never caught who did it. But I firmly believe, what goes around comes around." When Marlene discovers who she is, and intends to inform Claire, it is Peyton who begs her not to go into the greenhouse. Is it her fault Marlene decided not to listen to her plead?

Whereas Peyton's motives are understandable, Claire merely comes across as lazy. Her logic for hiring a nanny is that she is too busy working in the yard. She never thought to move a playpen outdoors? She even hires someone to help her work outside. She is so oblivious to her childrens needs that Peyton has to take care of a bully bothering Claire's daughter. "Roth! Leave Emma Alone! Look at me - if you don't, I'm gonna rip your fucking head off!" When Emma asks Peyton to take care of her if something happens to her mommy, the sensitive, caring nanny assures her, "I'd take care of ALL of you!"

Whereas Claire is self centered, her husband Michael is a whimp. "Claire, I just got my assed handed to me by our nanny. I will lay here and do nothing while you go kick her butt." What bothered me even more than Michael being a wuss, was his beard. The guy comes across a bit feminine, so he grew some mountain man facial hair to seem more manly? Like George Michael pretending to be straight, the beard does not up his masculinity.

Peyton was the best thing that happened to this family. She got rid of their rude friend Marlene, "You have a Harvard education, make something up!" She offered to do all of Claires motherly and wifely duties. She was willing to bend over backwards to make Michael happy. Dear God, the woman was working her tail off for these people and all she got was a dreary bedroom in their basement. 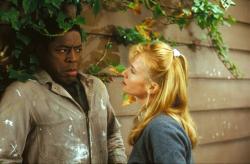 Don't fuck with me retard!

This is a decent B-movie thriller. It reminded me of the type of movie Alfred Hitchcock would have made if he had lived another dozen years. The pacing is great. Within 20 minutes the set-up is complete (yes it’s a bit convoluted but just go with it). Peyton then spends the next 40 minutes of the movie making Claire and Michael’s life miserable. The last 30 minutes generate high tension as Peyton turns deadly.

Scott, I agree with you that Claire’s behavior in so quickly trusting Peyton is highly naïve, but Peyton does leave her a letter of reference (although a forged one I am sure). Eric, I get that your review is tongue-in-cheek. Obviously being a lazy parent is no justification for being put through all the hell that Peyton puts the Bartels through. And yes Marlene is somewhat of a bitch but she is still a good friend to them.

I had forgotten that Julianne Moore was in this movie. She should play well-manicured, stuck-up bitches more often as she is great in this part. It’s interesting that she was a supporting player in this movie but has now become a much bigger star than De Mornay or Annabella Sciorra. (Whatever happened to her career?)

Watching the scenes where Marlene discovers Peyton’s true identity made me laugh. Technology has changed so much in 20 years that this part of the story wouldn’t work today. First of all she has to go to a library and look up an old newspaper article on microfilm to verify who Peyton really is. Being a successful realtor she does at least have a phone in her car but today she could have Googled Peyton on her iphone and then sent Claire a text without ever getting up from her desk.

The men are definitely just pawns in the story. Matt McCoy’s performance is pretty bad. Watch the wooden way he delivers the line about not being able to believe that Marlene is dead. And I agree that Ernie Hudson’s Solomon is just plain humiliating. Perhaps the most shocking line in the movie is when Peyton warns him, “Don’t fuck with me retard!” (see photo)

The Hand that Rocks the Cradle is an entertaining early 1990s suburban yuppie nightmare. Sure it's unintentionally campy at times but it manages just enough real tension to make it work. I rather enjoyed it.