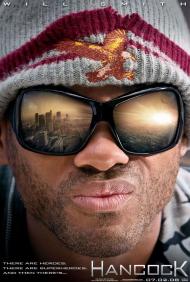 In Hancock, Smith plays a drunken superhero who causes more damage and endangers more lives than he rescues. The first part of the film features some over the top action scenes and plenty of laughs. The origin of Hancock’s power and the reason for his slovenly ways are not divulged early on. This leaves these scenes without any meaning. How can we care for him when we are not sure if he drinks because he is lonely or just an idiot.

Hancock befriends a PR man, Ray, his wife, Mary, and their son. Ray wants Hancock to clean up his image, and works with him on it. Meanwhile, Mary stares suspiciously at Hancock. An underlying current constantly passes between them.

There is always something on the screen to enjoy. Whether it is Hancock getting pissed because someone calls him an asshole or Smith’s and Bateman’s banter, the movie entertains. The problem the movie runs into is that it starts out like Superman on a bender, but then changes direction. A surprise shows up, and it becomes a love story straight out of Highlander. Either part works on it’s own, but together they seem like two different movies.

The plot twist, and the charcter that takes the movie into a different direction is the movie's problem. At first the character seems to answer questions and give insight. However, once you start thinking about it, you realize that the character's actions do not make sense.

Smith does a great job, but the Hancock of the first half of the movie has no resemblance to the Hancock of the second half. Smith pulls both parts off. He is so loaded with charm that Hancock can endanger a child’s life and not appear to be cruel. 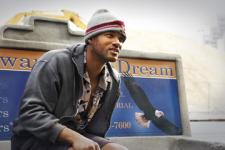 This movie works much better as a comedy than it ever does as a drama.

Wow, did the marketing department do a shitty job promoting this movie. I watched this movie expecting an outright comedy, and I laughed quite a bit for the first half (as I expected to based on the previews), but then, as Eric mentioned, the movie did a gut wrenching u-turn that left me baffled. Speaking personally, I find it odd that I'm expected to feel real emotion later in a movie that earlier featured a joke about one man's head literally going up the butt of a fellow prison inmate.

Although Eric is right, this movie could (and indeed should have) gone for all laughs or for all drama, I for one wish it would have stuck to the laughs. Smith always has charisma, and he's proven he can handle drama, but I prefer him in comedies. Plus, we've seen serious superhero movies many times before, but a comedy superhero is much rarer.

The comedy is also much stronger than the drama. My favorite bit of dialog in the movie comes early on when a shocked old lady exclaims that she can smell alcohol on Hancock's breath, to which he replies, "That's cause I've been drinking Bitch!" I mean, when's the last time you heard Batman say that?

I was never bored while watching this movie, but at the same time I never felt any real emotional investment in it either. I certainly wasn't caught up in the 11th hour love story or melodrama that was happening in the hospital.

All in all, a very mixed bag of a movie that missed an opportunity to be something more than it was. 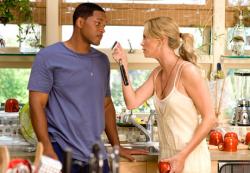 Will Smith and Charlize Theron in Hancock.

Hancock is a thoroughly entertaining and original superhero movie. I enjoyed the way the story unfolded. Sure the tone shifts suddenly from comedy to tragedy but for me it worked. As Eric wrote, at the beginning of the movie we have no idea just who this Hancock character is. He seems to be a real asshole, as he gets called several times by other characters. It isn't until much later in the movie that his backstory is revealed (or at least some of it anyway). I didn't mind the unexpected shift towards drama with the love story angle between Hancock and Mary. On the contrary I thought it added to the movie's originality and the scene where Hancock first discovers Mary's true identity is quite cute (see photo).

Will Smith is perfect in the title role. Again parroting my brothers, his innate charm makes his incredibly rude one liners funny without making him seem too unsympathetic. Scott mentioned my favorite line of his but the following conversation that takes place in the scene where he saves Ray's life is also hilarious.

One scene that didn't make the final theatrical cut but was included on the DVD gives another reason for Hancock's frustration and reasons for drinking early in the movie. He cannot have sex with a woman without killing her with his explosive supersonic ejaculations. Obviously Mary is the only woman capable of handling his orgasms. Apparently this scene didn't test well with audiences so it was deleted while the man's head being shoved up another man's asshole scene did make the cut. I guess you just never know what audiences will find funny and what they will think crosses the line.

At just 90 minutes director Peter Berg keeps the story moving quickly. The action scenes are well-done even if the big fight between Hancock and Mary is a bit overdone. Charlize Theron and Jason Bateman both give Smith good support. I wasn't sure just how the love triangle would play out but I'm definitely interested in seeing a sequel whenever it gets made. Hancock is Will Smith at his cocky, charming best.