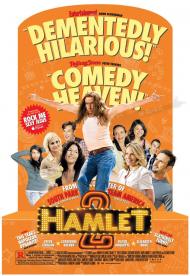 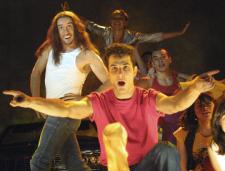 Starts strong, but ends on a lame note.

Hamlet 2 contains some very funny moments and British comedian Steve Coogan brilliantly nails a failed-actor turned high-school drama teacher with his performance. However, the movie as a whole fails to gel. It's a series of funny moments rather than a cohesive whole. And the happy ending seems too contrived and a betrayal of the plot that came before it.

Coogan plays Dana Marschz (about five too many jokes are made about people who can't pronounce his name), a drama teacher at a high-school in Tucson, AZ. Every semester he puts on a musical version of a Hollywood hit (a lot like Broadway does). And every semester his musical is savaged in the school newspaper by his nemesis, a pint-sized theater critic. His class is one of the worst attended in the school. His only mainstays are stereotypically, a gay boy and a musical obsessed girl. His marriage life is unhappy, in part because he can't get his wife pregnant.

His unhappy routine is upset when the school makes budget cuts and many of the elective classes are removed, leaving students with little option but to sign up for drama. A full cast, followed by the news that Drama will be the next class cut, inspires Dana to write an original musical that he hopes will be enough to save the Drama program. He doesn't quite leave his Hollywood motif behind and opts to go with a sequel, i.e. the titular Hamlet 2.

Instead of helping him though, his play only causes him more problems. One of its main characters is Jesus and one of the songs in it is, the very catchy, Rock Me Sexy Jesus. The principal, after hearing of this, bans him from the school, but with the help of his students, he manages to continue with the play in an old warehouse.

The first half of the movie is definitely the funniest. But once the play gets into production it seems to shift gears. At the start you're laughing at Dana's stupid idea of a play, but then once people start protesting it, it seems you're supposed to take it seriously and instead laugh at the protesters. Near the beginning of the movie, Dana says that he watched a bunch of movies about teachers who inspired their students to inspire himself about his class, as a joke. Then in the final third of the movie, that's what this movie becomes; exactly what it was poking fun at before. It's as if the movie Hamlet 2 is suddenly taking the play Hamlet 2 seriously. And (SPOILER ALERT), when the play ends up being such a big-hit that it ends up on Broadway, it's laughable. A. the play is awful and B. the idea that anything with the slightest whiff of controversy would end up in a Broadway Musical these days is a joke in itself.

If the writers of this movie had stayed off their high-horse for the entire length of this movie, it would have been much better. Instead, it's a funny movie that starts strong, but ends weakly.

Coogan and Poehler defend their right to offend conservatives.

I never felt the latter half was weak due to the presence of Amy Poehler's ACLU lawyer. The holier than thou ACLU act as if they are above the law by using the law for their own personal agendas. The scene where Poehler yells at the firemen is a very funny, yet only a slight exaggeration, of how they work. My favorite line of hers is when she yells,“You wanna hit me? I would love it if you hit me! I'm married to a Jew, I've got nothing to lose!” With Rock Me Sexy Jesus, this movie is meant to upset Christians, and I would go on a rant about that if not for it making fun of the ACLU, or as I like to call them, the liberal Mafia.

If there is any weak aspect to the movie it is Dana’s personal life with his wife and roomate. Early on it is clear where that is going. Does David Arquette have any lines besides when he tells Coogan that he left him a strawberry protein shake in the refrigerator? Why did they get a name to play such a small role?

Although the last half worked for me, the ending did not. Even though it gives Poehler on last good one-liner, it is not true to the rest of the movie. Dana is entertaining as a loser, but he would just be an extremely annoying success. The movie should have ended with Dana reading a horrible review of his Broadway show, written by the highschool critic.

I agree with you Scott that this movie is “…a series of funny moments rather than a cohesive whole.” For one thing there is no real character development. Dana doesn’t change except for the fact that he becomes a success; and you’re right Eric he would be an “extremely annoying success.” Sure some of the students change but not believably. Epiphany most notably. She begins the movie as a very sheltered racist who says things like, “I still get nervous around ethnics.” Then once she is exposed to the minority students she starts talking like a gang-banger and becomes suddenly sexually aggressive.

Before now I was unfamiliar with Steve Coogan. Why is it that British comics are so much more irreverent and acerbically witty than their American counterparts? I mean would an American comic say, “I have so much anger. I feel like I've been raped. In the face!”? The herpes commercial at the beginning is priceless, “Thanks Herpecol!” He is very talented.

Neither of my brothers mentioned Elisabeth Shue. She plays herself in a hilariously self-deprecating manner. I cracked up at the end when she points out “The Crane” move from The Karate Kid that Jesus uses on the Devil in the musical within the movie.

And speaking of the musical Hamlet 2, for me it was the highlight of the movie. It’s bad but in a very entertaining way. Hell, I would pay to see this on Broadway. I was singing “Rock Me Sexy Jesus” for hours afterward. 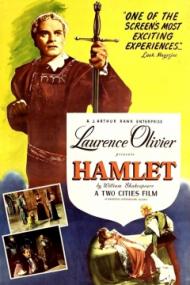