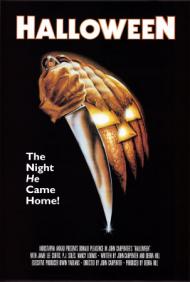 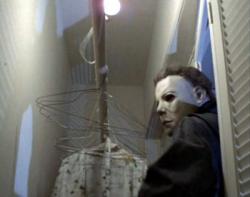 No use hiding in the closet.

It’s amazing how time can change your perspective on a movie. In my memory the original Halloween was a very adult slasher movie with plenty of nudity, sex and gore. Boy was I wrong. I doubt if it would even garner an R rating if it were to be released today. There is not a drop of blood in sight, only one mildly suggestive sex scene and a few quick glimpses of some breasts. Clearly my 12-year-old self was much easier to shock.

That said this is a masterful horror movie in that it is compellingly frightening without any CGI gore that we expect in our scary movies today. Michael Myers, aka The Boogey Man, is like a spectral figure throughout most of the movie. He is constantly in the background, quietly watching Jamie Lee Curtis’ Laurie on this Halloween of 1978. 15 years to the day since he murdered his sister. He has spent the interim years in a mental institution in a catatonic state. Only the psychiatrist played by Donald Pleasence suspects the truth. That Michael is simply waiting for the right moment to escape and wreak havoc on his old neighborhood.

The impact this movie had on pop culture is phenomenal. It marked the true beginning of the modern teen/slasher movie. Michael Myers became an iconic horror character for the modern age with his eerie looking William Shatner mask, heavy breathing and cool theme music. Would we even have Jason Voorhees or Freddy Krueger without there first being a Michael Myers? They are like late 20th Century versions of Dracula, Frankenstein’s Monster and The Wolf Man.

The atmospheric setting perfectly embodies its eponymous holiday. There are jack-o-lanterns everywhere and leaves blowing across sidewalks as costumed children trick-or-treat. Director John Carpenter even has several characters watching Howard Hawks’ original version of The Thing, a movie he would later remake.

The story slowly builds to a heart stopping climax. The final 20 minutes are still edge of your seat thrilling. It’s no surprise that Jamie Lee Curtis was typecast after this, her first movie appearance, as she makes a truly formidable horror movie heroine. She plays terrified terrifically but never stops fighting for her life and those of the children she is babysitting.

The final time that Michael sits up behind Laurie after she thinks he is dead, is one of the most memorable and frightening scenes in horror film history. You want to yell at the screen “Look behind you!” In fact from the opening murder sequence where we see through the killer’s eyes to the enigmatic ending Carpenter strikes all the right notes. The Boogey Man is not only indestructible but can be hiding anywhere, waiting to jump out and get us at any moment. All of the sequels to this masterpiece are superfluous.

Jamie Lee Curtis about to meet Michael Meyers in Halloween

As Patrick wrote, this movie had a huge impact on all horror films that followed. It created a whole new movie term, the “slasher” film. It became the description of any horror movie in which the killer uses some sort of sharp object to kill their victims.

The movie starts with creepy foreboding as Laurie sees Michael Myers staring at her throughout her day. The way he silently stands there is more ominous than any action could be. As Patrick wrote, the cold white mask, heavy breathing and theme music written by Carpenter created a truly memorable movie monster.

Patrick complimented the atmosphere with all of the jack-o-lanterns and blowing leaves. It was a nice effort by Carpenter but clearly this was not filmed in Illinois, where it takes place. Although we often see brown leaves moving about, all of the trees are still full of their green leaves. Paper leaves were spread about for a particular scene and then collected to be used in another.

I am nitpicking, I know, especially since this film has a much bigger problem. Nancy Kyes is a horrible actress. She is so bad I wondered if she even knew she was supposed to be playing a character and not just reciting her lines. Her death takes far too long to come about.

Agreeing with Patrick, the final part of the film, which begins when Curtis walks across the street and finds her friends dead bodies, starts a heart pounding sequence that is tense and frightful. He mentioned the part where Myers sits up as the most iconic, while there are several other great moments here. After Laurie finds the bodies, Michael literally steps out of the shadows just behind Curtis.(see the picture for this review)The scene that scared me the most, the first time I watched this, was the scene in the closet. (see the picture for Patrick's review)

Halloween was made on the cheap but Carpenter got his money’s worth. This was the most successful independent film at the time. It’s true legacy though is how it changed the face of horror movies. Every one made since owes a nod to this classic horror film. 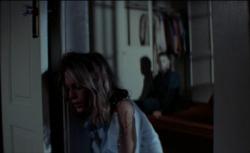 As my brothers wrote, this low budget horror film from 1978 (it cost a mere $325,000), is a true classic. It scared me as a kid and it still had the power to make me jump a few times 35 years later. What's really impressive about that is, as Patrick pointed out, the lack of gore. While so many later horror films, including the seven sequels to this one and a 2007 remake, would rely on blood and guts to shock, this movie relies more on suspense and the build up to the attack rather than the attack itself. It's why, while I agree with my brothers that the final 20 minutes are great, it's the first hour plus of build up that really lets the finale payoff.

The film was written in 3 weeks and shot in just 20 days. As Eric pointed out, clearly it wasn't made in the fall. There's an attempt to throw some fake dead leaves around, but so fitfully that it barely seems worth it. Clearly the leaves on the trees are still green. It was also not filmed in Illinois, but Pasadena, California. For the most part you can't really tell, except for at least one scene where in the distance you can clearly see a few palm trees for a split second. It was also difficult for the crew to find enough pumpkins in the spring.

Due to the low budget, the filmmakers were forced to be resourceful. Tommy Lee Wallace was production designer, art director, location scout and co-editor. It was he who purchased the Captain Kirk mask to be worn by Michael Myers. It cost a grand total of $1.98. Many of the actors wore their own clothes, while Jamie Lee Curtis's entire wardrobe was purchased from J.C. Penny for just $100. John Carpenter took only $10,000 for directing, writing and composing the music, but cannily retained the rights to 10% of the film's profits.

Also as my brothers pointed out, this movie was hugely influential on future horror films. Technically it didn't invent all the tropes it's credited with, but it did make them famous. These include the "final girl" who ultimately triumphs and the "have sex, get killed" tropes.

While the acting isn't great, it's not as bad as Eric claims, even Nancy Kyes. This is probably the film's weakest aspect though, and the biggest victim of the abbreviated shooting schedule. Still, the young cast does what it can and their amateur acting adds to the fun and nostalgia. Jamie Lee Curtis seems genuine and displays a natural talent that's befitting of someone of her Hollywood heritage.

There have been many attempts to imitate Halloween's formula in the intervening 35 years, but none have ever truly matched it. 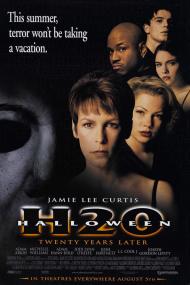