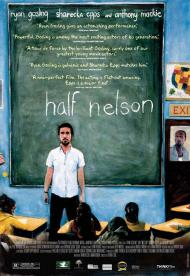 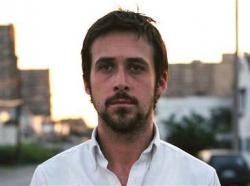 Ryan Gosling in Half Nelson.

I hated this movie. It's one of these movies that's very subtle and most things are played below the surface with lots of inwards and naturalistic acting. And before you turn up your movie snob nose at me, let me say that I have no problem with that, except that if I'm going to sit through a movie of that nature, I need to be watching a story or some characters that I actually care about or have an interest in, and not the pathetic wretches that appear in Half Nelson.

There isn't much plot here. Ryan Gosling plays High School Teacher Dan Dunne. He teaches a History Class, with an undisguised liberal bias, to inner-city students by day, and nurses a severe drug habit by night. He strikes up an unlikely friendship with Drey (Epps) one of his female students and basketball players after she discovers him stoned out of his mind one night. She has her own family problems and is leading just as depressing a life as Dan, only at least she manages to stay off drugs.

I don't have to like the lead characters in a movie for me to enjoy it, but if you're going to make a movie with an unlikable, worthless, pathetic piece of crap main character like this one, you'd better have something, anything, on the screen to keep my attention. But there isn't anything here except Dan's character. Yes, Drey gets some screen time and she's more interesting than he is, but they keep going back to Dan.

Gosling was nominated for an academy award for his performance as Dan and yes, he does a decent enough job if you're into this kind of thing. Giving him an award for this role would only encourage this type of movie-making though, so I'm glad he has no chance of winning.

The thing I hate about people who make movies like this, with the emphasis on "art", is that they seem to look on "entertainment" as a dirty word. Whatever the hell the meaning is behind this movie, is lost on me because I was bored stiff through out it. I felt as though I was wasting my time by watching it and couldn't wait until it was over.

Some movies can you depress you and still be good. Children of Men is a dark and depressing view of the future, but is still a great movie. Half Nelson is depressing and boring and a complete waste of time. 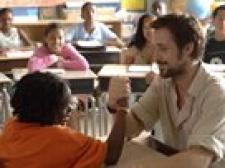 Dan teaches that history is change, created by two opposing forces. How did Pompei oppose the volcano eruption? Did someone oppose the invention of the Computer? Germany did not oppose Hitler, so how did he make history?

Dan is not completely an, "...unlikable, worthless, pathetic piece of crap main character..." He does have a connection to the students and they genuinely seem to like him, although the movie never says why.

At first, the only thing he seems to care about is his drugs and job. A former flame wants to talk, but he would rather get stoned by himself. After Drey catches him doing drugs they becomes allies. They look out for the other. Dan tries to protect her from a drug dealer, while she keeps his habit a secret.

The sad truth is that both of them are screwed. Dan by choice and Drey by circumstance. Dan chose to be strung out on drugs, and I can therefore not muster any sympathy for him. Drey's dad is nowhere to be seen and her mother works long hours, leaving her to spend time with drug dealers. We can root for her to get away from all of that but she is far too rooted to likely break away. In one scene she acts tough, swearing and threatening some boys who stole her bicycle, while the drug dealer looks on proudly. She later basks in the glory of her act of bravery as the drug dealer recounts the story to his girlfriend.

Although I liked the two main characters a bit more than Scott, I agree with him that they are both, "pathetic wretches." Dan because he screwed up everything important in his life and Drey because she is far too comfortable in the sad life she has. Yeah, I hated this movie as well. 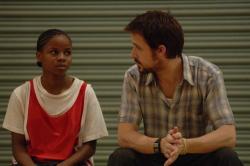 Shareeka Epps and Ryan Gosling in Half Nelson.

Dan and Drey are both lonely and sad. As Eric said they become allies after Drey happens upon Dan stoned out of his mind on the floor of a school bathroom. Dan is so fucked up that although he wants to help Drey he is actually adding to her destructive environment. He realizes this when he confronts the drug dealer Frank and asks him to stay away from Drey. Dan is, in fact, a more dangerous role model for Drey as he is her teacher/coach and therefore someone she is supposed to look up to and emulate. When Drey tells Frank that Dan is her friend, he sets her straight saying, “He's a base head and they don't have friends.”

In spite of the mess that is his life, Dan is a decent teacher. He gets his students invested in learning by using the concept of dialectics and philosophy, mostly through studying current event topics from the last century.  He makes an effort to speak their language without talking down to them.  He has many books on communism at his apartment. But Dan is so fucked up that he lacks any real convictions. Like all crack heads his life is run by his need to get high. It is his highest priority.

The final 20 minutes are the best and most revealing moments of the movie. I would argue that Half Nelson is an indictment of the white liberal mentality. Writer/director Ryan Fleck shows us how each of these characters is a product of their environment. The movie switches back and forth between Dan visiting his parents and Drey hanging out with Frank and his girlfriend in the scene Eric mentioned.

Dan's parents were clearly progressive types that overindulged their children. This is exemplified by the song “It's alright to cry” that Dan's mother plays. It's from the soundtrack to that quintessential 1970s children's self-love television special, Marlo Thomas's Free to Be... You & Me. Dan's mother is an enabler and his father is a closet racist. Sounds like the perfect recipe for the classic case of White Guilt Dan is carrying around. Meanwhile Drey reacts as any 13-year-old kid would to the vocal approval of an adult. She glows with pride at being praised for punking out the kid that stole her bike.

The pacing of the movie is slow and I understand what Scott means by the artistic style in which it unfolds. However, I do feel compelled to point out that he accuses those who appreciate this type of movie of being snobs when in fact his attitude towards the characters in this movie is actually quite snobbish. Scott, I can understand your not giving a shit about Dan as he is an adult making his own very poor life choices, but I cannot fathom how anyone could watch this movie and not feel compassion for Drey's circumstances and get emotionally invested in her welfare.

I understand why Gosling was Oscar nominated. He gives one hell of a performance, without a single false note. The young Shareeka Epps is a revelation as Drey. She is a natural actress, and brings a real veracity to the role. Half Nelson ends like it begins, without much hope or resolution for these two lost souls, except to say that, for what it's worth, they now have each other.