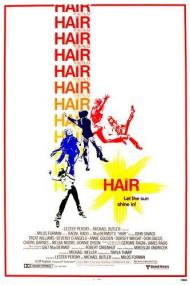 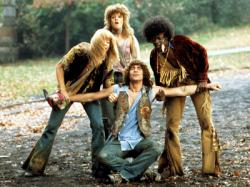 Hair, the original “Rock” Musical, features one of the greatest sing-a-long scores of all time. This Milos Forman directed adaptation of the hit Broadway show captures the essence of the drop-out hippie culture of the late 1960’s while changing the storyline and the order of the songs and in some cases which characters perform them.

John Savage plays Claude Bukowski, a young man from Oklahoma who comes to New York City on his way to basic training before heading off to fight in Vietnam. He encounters a group of draft dodging hippies living in Central Park and spends a few wild days and nights with them. Later they come to visit him in Nevada right before he is shipped overseas and an unexpected twist of fate occurs.

Berger (Treat Williams) is the leader of his little gang of hippies which includes Hud, Woof and Jeannie. They are later joined by rich girl Sheila (Beverly D’Angelo) and Hud’s (AKA Lafayette’s) baby mama and his infant son. Oh and Jeannie is pregnant by either Hud or Woof.

When they first meet Claude in Central Park Berger asks him where he is from. He replies, “Oklahoma.” Jeannie says, “Don’t worry about it. I used to come from Kansas myself.” Berger and his friends introduce Claude to several new experiences like getting high, getting arrested, skinny dipping in Central Park with a beautiful woman, and tripping on LSD.

Like the best musicals Hair, while essentially a drama, infuses the script and several of the songs with humor. It also has iconic counterculture moments like the hippie giving the speech in the park, “The draft is white people sending black people to make war on the yellow people to defend land he stole from the red people.”

But this movie, like all great musicals, is all about the music man.

The hippie anthem “Aquarius” is probably the best known song from the score. Renn Woods sings the hell out of it while multicolored hippies cavort around Central Park. “Sodomy”, the title song and the medley of “Black Boys” and “White Boys” are all amusing songs with ironic and/or sexually explicit lyrics. “Good Morning Starshine” and “Let the Sunshine In” are uplifting pop melodies that soar. “Donna” and “Manchester, England” are catchy tunes that you will find yourself singing along to. There are many others as this movie is a nearly continuous celebration in song.

Milos Forman perfectly captured the late 1960’s in visuals and attitude. He also did an impressive job opening up this stage hit for the screen. There are several crowd scenes that must have been quite challenging to film.

There are a couple of familiar faces in small roles. Charlotte Rae, best remembered as Edna Garrett in the ‘80’s sitcom The Facts of Life, is in the scene where Berger and his friends crash Sheila’s party. And this was the movie debut of Nell Carter. She sings on several songs in that distinctive nasally voice of hers.

I was lucky enough to see the revival of Hair on Broadway in 2010. It was great but I think the movie will always be the definitive version as it has a more cohesive story and a bit more character development. Hair, the movie, is quite simply one of the best musicals made in the 1970’s, which was in my opinion the last great decade for the genre. 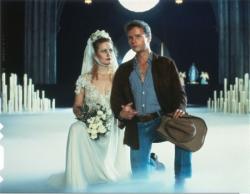 When I first saw the movie Hair I was in high school.  I thought that Berger and his gang of hippies were the coolest people.  This diverse group did what they wanted to, when they wanted to and did not care what anyone else thought of them.  I have since however, grown up.

Now that I have matured I see these hippies as the detriments that they really are.  They beg strangers for money.  They do all kinds of illegal drugs.  They sexually harass strange women on horseback when they sing a song about sex to them.  They trespass onto some ones property when crashing a party.   They sponge off their parents.  They carelessly create babies they have no means or actual desire to take care off.  They steal a couple of cars.

The greatest achievement is that Milos Forman does not glamorize these bums.  They are shown to be completely irresponsible.  The film's best moment is when Hud's woman and child find him in the park and she sings "Easy to be Hard."  Her conversation with the pregnant Jeannie is the film's most honest moment when she says to her, "You're crazy." These hippies are all about partying and avoiding responsibility, but life is still there whether they like it or not and it will eventually catch up to them.  Berger helping Claude, which involves cutting his hair, is his most selfless act and indicates he has finally become a man.

As Patrick wrote, many of the songs are catchy.  He also mentioned that it has a better storyline than the stage production, but the story line is still not all that memorable.   It is not helped by the plethora of songs and production numbers.  Many of which seem more about shock value than anything else.  The final song, "Let the Sun Shine In" does carry an emotional wallop.  It celebrates life, freedom and sacrifice.

Most of the cast is about ten years too old for their roles.  At 28, D'Angelo is playing a high schooler.  While Savage was a thirty year old playing someone fresh off the farm, joining the army.  The average American soldier during Vietnam was nineteen.  My favorite piece of casting is director Nicolas Ray as a General.  Hair defines the late sixties while Ray's Rebel Without a Cause exemplifies the 1950s.  Every generation has some kind of struggles, when in truth they all just need to grow up and from my experience, it happens to nearly everyone. 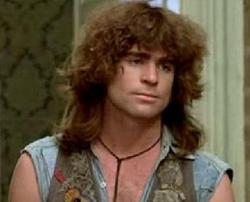 Treat Williams as Berger in Hair.

Eric, I had much the same thought as you about the ages of the cast. Beverly D'Angelo in particular is far too old, but so are all of them. Dorsey Wright as Hud was in his early 20s, but the rest were all pushing 30 and it shows. I think their carefree antics would have seemed less irresponsible had they been played by more age-appropriate actors.

Not that the cast doesn't do a good job. Treat Williams steals the movie as Berger. Everyone else is just there to support him. Savage plays the yokel well enough, but he never brings enough to the part. I certainly never bought into the love story between his Claude and D'Angelo's Sheila. The moment Berger begins speaking at the party, you can see the lust light up in her eyes, but there is no similar heat when she looks at Claude.

The soundtrack features some great songs, some good songs, some not so good songs and some completely forgettable ones. For every "Aquarius" and "Good Morning Starshine" there is a "Three-Five-Zero-Zero" or "Electric Blues". Too often the songs feel grafted onto the plot and are only loosely connected to it. Instead of moving the story along, they slow it down.

Although the ending is sad, I never really believed it. No one on the base knows who Claude is or notices that he's been replaced? And Claude never tells anyone? He just lets his friend fly off and die in his place?

The first act is much more entertaining than the second. Confining the story to Claude's time in New York where his mind is broadened and then ending it with him going off to the Army would have been better and reduced the overly long running time. There's also more humor in this first half. The hippies gate crashing the posh party in Queens is worth a few laughs. The cab screeching to a halt when a naked Sheila hails it is another funny moment. One of the best and funniest scenes is when Berger returns to his parents house to borrow some money.

I remember enjoying this movie when I was much younger, although even then I enjoyed the first act more than the second. There are some moments and some songs that I still enjoy now, but overall it failed to live up to my memory of it.