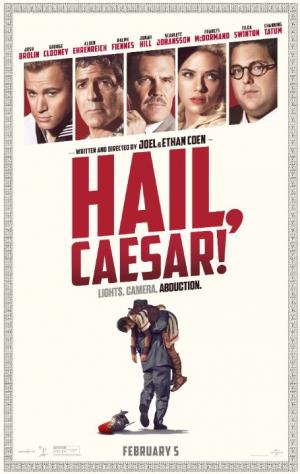 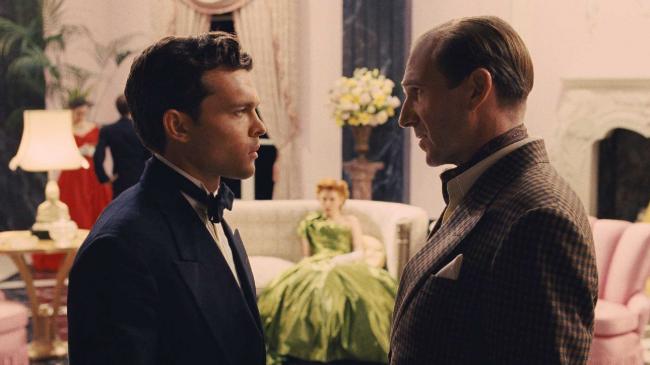 Hail, Caesar! the latest comic pastiche from the Coen brothers is a welcome ray of cinematic sunshine amidst the wintry pallor of the February doldrums. It's a colorful (and smart) homage/satire of 1950's Hollywood featuring a dream cast led by Josh Brolin. Shot on 35mm film stock, the richly vibrant yet day-dreamy cinematography, and clever use of Hollywood landmarks, made me feel as if I'd stepped into my own imagination. I couldn't stop smiling throughout the entire picture.

Narrator Michael Gambon sets the scene in an appropriately angelic tone of voice. Brolin plays a fictionalized version of real-life producer/fixer Eddie Mannix (he was previously portrayed by Bob Hoskins in Hollywoodland (2006)). Mannix is head of production at Capitol Pictures and the man who makes problems disappear for the studio. He is also dealing with a job offer from the Lockheed Corporation and, on a more personal level, Eddie Mannix is searching for spiritual guidance and meaning in a crazy world.

A singing cowboy who can't act, a biblical epic where the leading man (Clooney) is kidnapped by communists, and a knocked-up-out-of-wedlock starlet (Johansson) are some of the problems Mannix faces in a single day at the office. Along the way the audience is treated to spot-on parodies of an Esther Williams/Busby Berkeley extravaganza in a swimming pool and an overtly homoerotic musical number featuring Channing Tatum and a bunch of guys dressed as sailors a la Gene Kelly and Frank Sinatra.

All the big name Oscar winners in the cast are perfect in their roles but for my money Alden Ehrenreich steals the entire movie as singing cowpoke Hobie Doyle. The studio has inexplicably decided to cast him in a drawing room drama to be directed by Laurence Laurentz, an Ernst Lubitsch type played by Ralph Fiennes. Hobie's repeated attempts to say the line, “Would that it were.” are worth the price of admission and this scene (see photo) is destined to become a classic movie moment.

My only complaint with Hail, Caesar! is that it could have been funnier. Don't get me wrong. When it's funny it's very funny but sometimes the laughs fall flat. The scenes in the beach house with the communist writers comes to mind. But then a moment later you'll get a laugh out loud moment like Frances McDormand as a film editor with a cigarette in her mouth who has an unfortunate accident with her scarf.

And this being the Coen brothers there are plenty of details for film buffs to spot and enjoy. For example, an average moviegoer will recognize Hobie Doyle's date, Carlotta Valdez, as a Carmen Miranda type, but only serious film buffs will also know that Carlotta Valdez is a mysterious dead woman mentioned in Alfred Hitchcock's Vertigo (1958).

Hail, Caesar! is a special treat for classic movie fans but it may not translate to the general population. 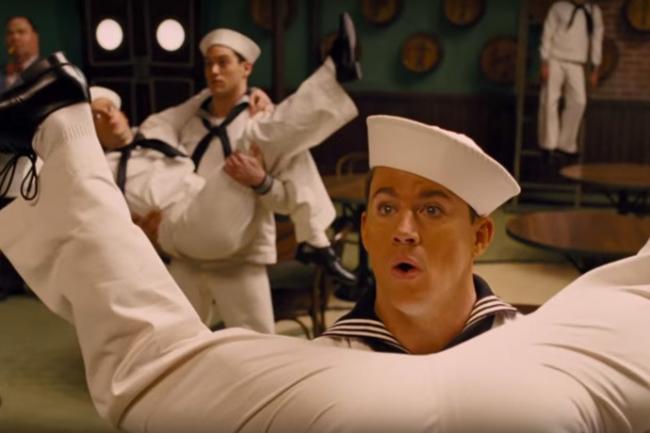 One of the unique things about the Coen brothers is their ability to move from drama to comedy. Not many directors can claim credit for a movie as zanily funny as Raising Arizona and one as violent and serious as No Country for Old Men and make a success out of both of them. As Patrick indicated, Hail, Caesar! finds them in a lighter mode. It's not as outright a comedy as some of their earlier films, but it is a lightweight, amusing little film, especially for fans of Old Hollywood.

There isn't much of story to the plot. As Patrick said, it's really just one day in the life of Eddie Mannix as he tries to keep the studio running. The closest it comes to a plot is the kidnapping of Clooney's character by the communists. This is the central device that the rest of the stories orbit around. Unfortunately, it's also the weakest story line of the bunch. It evokes few laughs and never really goes anywhere. Its conclusion and the surprise reveal about one of the characters is odd, but not very satisfying.

The film works best simply as a collection of anecdotes and tributes to classic Hollywood movies. Channing Tatum's dance number, Johansson's wisecracking actress and her flirtation with Jonah Hill's character, Frances McDormand's chain smoking film editor, and Tilda Swinton as twin sister gossip columnists are all highlights that stand pretty much on their own. It's like a collection of short stories woven together. I also agree that Alden Ehrenreich, despite being the least famous actor in the film, steals it from every one of his co-stars. His interaction with Ralph Fiennes is indeed one of the film's funniest scenes.

There are moments in this film that can stand alongside some of the best work the Coen's have ever done. Bits of it are some of their most sheerly entertaining work ever. Unfortunately, they weren't able to come up with a strong enough central device to tie it all together. 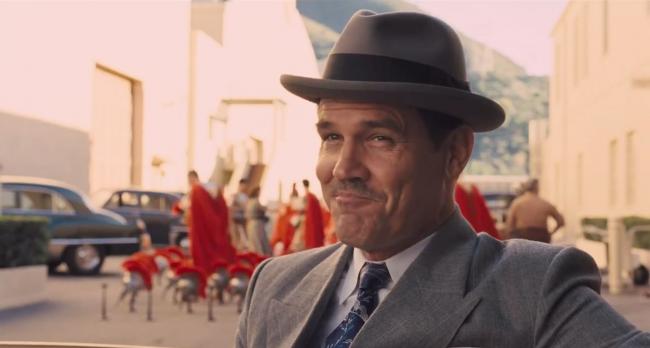 A movie like Hail, Caesar! should have been, and was, an easy sell to threemoviebuffs. We love old films and Hollywood history. Taking place, mostly, in a Hollywood studio in 1954, made this a must see for the three of us. Like Patrick, the setting easily transported me there and I too found myself with a smile on my face as the movie unfolded.

The recreation of some iconic Hollywood performances are the highlights of the film. Patrick wrote that Scarlett Johansson plays an Esther Williams type actress. She has a reputation with fans as being an innocent sweet girl. The punchline comes after her performance when we see what a low class slut this actress actually is. Channing Tatum's song, "No Dames" is hysterical. A bunch of sailors at a bar called "The Swinging Dingy" of all things, sing about being at sea without girls for months at a time. It begins as a lament but then turns into a joyful tune as they will still have plenty of seaman on board for company. Although I agree with Patrick that the, "Would that it were." scene is great, I think Tatum's dance number will be this film's most memorable.

Now speaking of Alden Ehrenreich, he does indeed steal the film. With the exception of Brolin and possibly Clooney, he likely has the most screen time. Although I am not sure when his skills ended and CGI took over, Ehrenreich learned to trick ride a horse and use a lasso for his cowboy scenes. He said in an interview that the hardest trick was the spaghetti lariat, which was actually a string of rubber. He also revealed that he played the scene with Ralph Fiennes completely straight, "It's funny, and this is the first time I realized this, I didn't even think of this when we were making it..."

Threemoviebuffs have been giving Ehrenreich good reviews since Beautiful Creatures (2013). The problem is that he has yet to star in a really great film. “There’s movies that I would’ve loved to be in that I just wasn’t even considered for because they need a name." Although he has garnered universal praise for playing Hobie Doyle, Hail, Caesar! is not earning the box office dollars to give him the exposure his career could use. Not to worry though, he already has several other films in the works, including one, that was filmed prior to Hail, Caesar! with Warren Beatty, about the life of Howard Hughes. Reportedly it also takes place in 1950s Hollywood. I guess you can count on threemoviebuffs being in line to watch and review that one.

Although there was much in Hail, Caesar! to enjoy, it is too scattered to be considered anything above mediocre. The good parts are truly good but every scene featuring Clooney should have been cut up to the point where Hobie Doyle walks in and finds him in the chair, reading and drinking. All we needed was for Eddie Mannix to discover one of his actors was missing and a ransom note was found. The worst moment is the submarine scene. Why was he getting on it? Why did they bring the money or the dog?

The Coen brothers give us a scene where religious leaders bicker in a slightly humorous manner and later some communist screenwriters do likewise. Although those scenes are intended to be light, they are far too deep for a comedy. They stop the movie cold. The only moment I liked with the writers is when one tells Clooney that they subtly sneak Communist propaganda into their scripts every chance they get. Later, we see a scene with Clooney, as Baird Whitlock, making a movie, where his line is that Jesus, "Sees us all as equals." Slaves and Romans. It is the Coen brothers poking fun at the Hollywood red scare of the 50s by saying it was all true.

Hail, Caesar! contains some great moments but as an over-all film watching experience, it never quite gels.