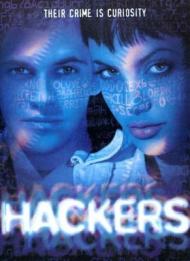 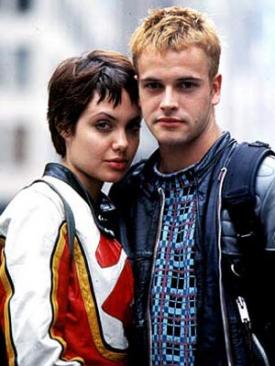 Making a movie about "modern" technology is like driving down a dead end road. The ride may be nice but you know it will be short. Computers and technology are evolving so fast that what is new and exciting this year may be out dated and old next year. Hackers is such a movie and the makers of this film knew just how short of life it would have.

The movie opens with an 11 year old being arrested for hacking into some computers and causing some kind of problems. The details are pointless. His motive is never explained. Seven years later the boy, Dade, is now a senior in high-school, recently moved to New York with his mother. His parents got divorced two years ago, for no reason ever given and it does not play any part in the movie. Due to his arrest and sentencing he is to never be allowed online. This movie is so old they do not even use the term "internet".

He soon meets up with some other hackers and falls for a female hacker, Kate. Basically these are just a group of computer nerds who live to hack. They are all criminals to some degree because of the hacking but the movie makes it seem like they are just curious, rebellious youth. One member ends up hacking into a large database and just happens to come across a plot by a computer wiz who is planning to rip off a bunch of money from his employer. The government gets involved and the hackers run around like heroes on the lam. There are also some Dawson's Creek moments of Dade falling for Kate.

Everyone in the movie is dressed in some kind of quasi-futuristic fashions. Miller even wears some thigh high leather boots? It was as if the makers of this film knew it would be dated very quickly and wanted to disguise the date of the film by having everyone wear clothes from different eras. The government agents are dressed like it is the 1950s.

The graphics for when they are hacking are ridiculous. Typing on a computer is boring when someone else is doing it, so the makers of this film added all kinds of graphics to illustrate what is supposedly going on inside of the computer. It just looked like ridiculous filler.

The cast is nothing to brag about either. Jolie does the best job, but she looks like Mick Jagger and Liza Minnelli's love child. After seeing this movie it is easy to understand why it has taken so long for Miller's and Bradford's career to get going. They both look downright amateurish here. With the rookie techno aspect and the wardrobe laughable, the only thing worth remembering about this film is that it is where Jolie and Miller met before getting married. 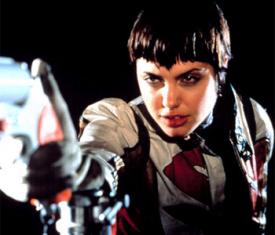 From the before they were stars file.....

There are some really interesting and true hacker stories that could potentially make great movies. Before they founded Apple Computer, Steve Wozniak and Steve Jobs built and sold blue boxes; devices that enabled you to make long distance phone calls for free. Legend has it that during one demonstration of the product Wozniak reached the Vatican where by pretending to be Henry Kissinger he was one Cardinal away from speaking to the Pope. Kevin Mitnick became one of the most notorious Hackers after he became a fugitive for two and a half years after a warrant was issued for his arrest. Mitnick's case was particularly interesting because a great deal of his hacking was what is termed "social engineering"; meaning that rather than using a computer program to obtain a password, he would gain knowledge of computer systems by talking the information out of people using pretense and good old-fashioned subterfuge. With so many intriguing real story lines, you'd think the filmmakers could have come up with something better than this.

When I sat down to watch this movie, I assumed that the fact that the filmmakers would get the technology all wrong would be my biggest complaint. I just assumed the technology would be wrong because Hollywood ALWAYS gets computer technology wrong in movies. Despite throwing some real computer jargon and quoting from the actual Hacker's manifesto, this movie confirmed my assumption. The actual hacking scenes are both stylized and ridiculous. Like most movies that feature hacking the hackers are capable of doing impossible things. The biggest surprise to me though was that this was the least of the movie's problems.

The movies' biggest problem is its script, which is poor at best and cringe-inducing at worst. The dialogue is awful, the plot stupid, the costumes laughable and the characters idiots. It's so bad that it's total camp and almost funny (almost). I mean how can you watch a middle-aged guy who calls himself "The Plague" skateboard down a dark street in New York, clinging to the side of a car, snatch a floppy disk from someone's hand and then continue on to disappear into the steam-filled night, without laughing. And some of the lines will make you either groan or laugh depending upon your mood. Fisher Stevens in particular is guilty of some really bad line readings, which isn't entirely his fault since he's also given some really bad lines.

About the only thing I found interesting about this movie was seeing a young Angelina Jolie before she became a star. She has a very exotic look here and maybe it's just the benefit of hindsight, but you can see she has something, which is more than can be said for Rafael Moreu, this movie's writer. His only other writing credit is 1999's The Rage: Carrie 2, which should tell you all you need to know about him and the quality of this movie. 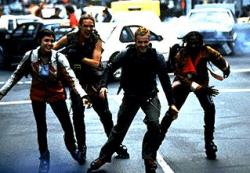 Reading both of your reviews was more entertaining than sitting through this abysmally putrid movie. Eric, your description of Angelina Jolie’s appearance in this movie as looking like “Mick Jagger and Liza Minnelli's love child” is both spot on and witty. Scott, I chuckled when I read your deadly accurate criticism of screenwriter Rafael Moreu’s talent by succinctly mentioning his only other movie credit, The Rage: Carrie 2.

The first thing I noticed when watching this dated mess was the scene at the beginning where a young Felicity Huffman pops up as a prosecuting attorney. Later on I was mildly distracted by spotting a young Marc Anthony playing an FBI agent as well as the talking member of Penn and Teller showing up as one of the bad computer guys.

In 1995 I turned 28. At that time in my life I was hanging out with a group of younger co-workers. I went through a phase where I dyed my hair different colors and tried out different ways of styling it. At one point I had ridiculous looking braids like the ones Matthew Lillard sports in this movie. In retrospect I’m sure I looked every bit as stupid as he does here.

The swiftly advancing computer technology coupled with the approaching end of the millennium gave the mid-to-late1990s a sense of future shock. This movie successfully captures that feeling, which is about the only thing it succeeds at. The cast is intentionally culturally diverse and the script attempts to be cutting edge. It is now, of course, hopelessly out of date.

Scott mentioned just how bad the dialogue is. Here’s a sample line spoken by middle-aged hacker The Plague: “Kid, don't threaten me. There are worse things than death, and uh, I can do all of them.” How eloquent. Fisher Stevens at least deserves credit for keeping a straight face while saying, “We are Samurai... the Keyboard Cowboys... and all those other people who have no idea what's going on are the cattle... Moooo.”

I’m sure Angelina Jolie has long since deleted Hackers from her résumé.