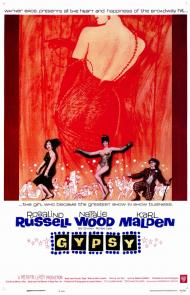 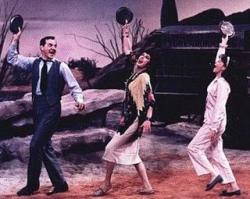 Gypsy is considered by many theater fans to be the musical equivalent to Hamlet. It features one of the all-time great scores, is the quintessential backstage musical and Mama Rose is the template for all stage mothers. Based on the memoirs of stripper Gypsy Rose Lee with book by Arthur Laurents, music by Jule Styne, lyrics by Stephen Sondheim and direction by Mervyn LeRoy this movie has pedigrees in spades.

Unfortunately it is stiflingly stage-bound and features a non-singing actress in arguably the greatest singing role in movie history. Why Ethel Merman didn’t get the part she so brilliantly created on Broadway is one of the great travesties of cinema. Oh well, I guess that’s show-biz.

Don’t get me wrong, Rosalind Russell was a great talent and she ACTS the part of Mama Rose to perfection. She manages to convey her steely determination, desperation and aggressive energy but with an underlying glimmer of vulnerability. BUT, the fact that she wasn’t a great singer is insurmountable.

The filmmakers searched for and found a singer, Lisa Kirk, who sounded very much like Rosalind, only with a better range. Bits of Russell’s actual vocals were mixed in on some songs but neither Kirk nor Russell can pull off the belting required to do justice to “Everything’s Coming Up Roses”, “Some People” and especially “Rose’s Turn”.

Natalie Wood is good as Louise, the plain, less talented daughter turned stripper icon. She really shines in the last act. Other famous songs from the score include the little-girl-number-cum-stripper-anthem, “Let Me Entertain You” and the rousing “Together, Wherever We Go” which was inexplicably cut from this movie version.

Bette Midler tried her hand as Mama Rose in a made for TV version in the early 1990s. Both Laurents and Sondheim have gone on record as disliking the two film versions made thus far. Word has it that none other than Barbra Streisand herself is negotiating a deal to bring her interpretation of Mama Rose to the big screen. She sure as hell has the singing chops for the part and it would make a nice bookend to Funny Girl. My fingers are crossed!!!!