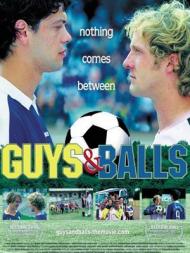 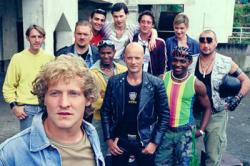 Maximilian Bruckner as Ecki, with his soccer team in Guys and Balls

For the past few years I have enjoyed lots of German cinema.  Some have blown me away while others not at all.  The German made Guys and Balls (Männer wie wir) has a few laughs but is as cliched a sports film as they come.  It is the classic under dog team fighting for the big win.  The only unique angle is that it is about a gay sports team.

Ecki and his sister Susanne grew up in their parent's bakery.  Susanne became a nurse and moved to a nearby town while Ecki joined the local soccer team.  After celebrating at a bar, a drunk Ecki tries to kiss an uninterested team mate.  Of course the rest of the team walks in on them.  Ecki is kicked off the team and must face his parents with the news of his coming out.

It never states Ecki's age but he is sexually naive and is just now admitting to himself that he has sexual feelings for men and not his hot girlfriend who shaved her pubic hair in the shape of a heart to let him know that she is ready to consummate their relationship.  Ecki's parents are disappointed in the news.  They are both huge soccer fans who loved going to his matches.   Ecki works in the bakery with his father and they no longer know what to say to each other.  At one point his dad takes him to a whore house to get him to have sex with a woman.  A prostitute tells him she can give complete satisfaction to any of her customers.  Ecki replies, "Wanna bet?"

Ecki moves in with his sister who is accepting of his sexuality.  He decides to form a new soccer team with only gay players and schedules a match with his original team.  The only problem is that he does not have a team.  He and his sister print up flyers announcing the formation of a gay soccer team, and go gay bar hopping to hand them out.  This is the funniest part of the film.  One bar is full of swishy gays who laugh at him.  Another is a leather bar that misunderstands what he wants.  They try to put him in some sort of swing inside of a cage before he runs out telling his sister that maybe he is not gay after all.

The players come.  Three men from the leather bar who live together show up. One is a father who desperately wants his son to watch him play. There is also a male nurse who Susanne likes but ends up being gay and starts a relationship with Ecki.  But not to worry, a secretly straight man the siblings met early on at a book store joins the team because he is interested in Susanne.

The sports story plays out as expected.  You know how it will all end long before it does.  One unique aspect was the portrayal of Ecki's parents.  Ecki must deal with the fact that he is suddenly out and that everyone else knows it.  No doubt coming out of the closet in such a rushed way could be traumatic.  Ecki's parent are at first made to be the bad guys, but do they not need time to adjust to the truth as Ecki does?  He had years to come to terms with his sexual orientation, while they had none.

Guys and Balls has its moments of charm and you will of course root for Ecki's team to win, but it never finds a consistent tone to be a truly funny film.  Often when I watch foreign comedies I wonder if I miss jokes due to translation.  Slapstick travels well overseas while dialogue not so much.  Either way, this film is worth a few chuckles despite its predictability. 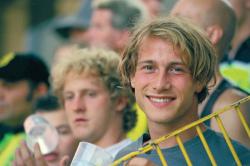 Maximilian Bruckner and David Rott in Guys and Balls.

Guys and Balls is a German sports comedy but it plays out like your typical Hollywood entry in the genre. Perhaps the fact that the director was born in the United States and didn't move to Germany until she was six had something to do with this. As Eric said it follows the same tried and true formula that Hollywood underdog sports movies have followed for decades. The gay angle imbues a bit of freshness to the story and it's also the one aspect of the movie that gives it a distinctly foreign flavor.

Not so much the fact that there are gay characters, but the manner in which they are portrayed.

Even now, eight years farther down the road, Hollywood isn't ready to make a movie like this, where we see three leather men in bed together and one of them is the father of a young boy. And it's all handled in a very nonchalant manner. For me the gay father living in this unusual romantic situation while longing to be a part of his son's life provides the real heart of the story. Sure Ecki's relationship with his parents is the main storyline but I was more interested to see how this subplot would play out.

Like in most feel-good Hollywood movies, the characters are all painted with broad strokes. Ecki's parents taking a while to adjust to the fact that their son is gay rings true but the homophobic ex-wife who becomes magically accepting of gays over the course of one soccer game doesn't. A game, by the way, in which the outcome is never in doubt.

The funniest character is the old man that pops into Ecki's parent's bakery everyday with a new gay joke. Here's a typical one: “How can you tell a gay snowman? He's the one with the carrot up his butt.” Something about his gleeful delivery made me crack up every time he told one of his corny jokes.

The pacing isn't as fluid as it should have been. Right before the big match it gets called off and then of course is back on. This dramatic interlude does nothing to enhance the story it merely prolongs the inevitable outcome unnecessarily.

It's also a bit unfair how the gay Brazilian teammates are shown. They are the best players on the team and provide nice eye candy but neither of them gets more than a line of dialogue and absolutely no character development.

As a gay baker myself I chuckled at the scene where they speculate that Ecki's being gay may have had something to do with the fact that his father was off baking every night instead of being at home providing a proper male role model. Ecki's father scoffs at this notion as it would mean that all baker's sons are gay.

My husband Rich reminded me that we had watched this movie together about five years ago. It didn't make much of an impression as I had nearly forgotten about Guys and Balls until Eric reviewed it recently. It's not a bad movie but it's certainly a formulaic and predictable one.  For a funnier take on a gay soccer team see the British movie KickOff. 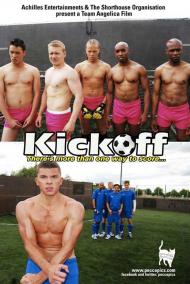