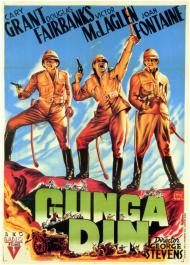 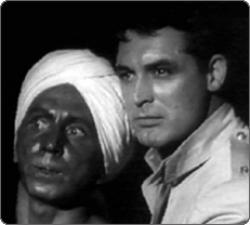 Although in certain ways this movie appears dated (for one thing it's in black & white, something that automatically puts it on the "won't see" list for millions of moviegoers), Gunga Din was way ahead of its time in terms of being a big budget Hollywood action/adventure movie. The intense pacing and level of violence definitely influenced action movies for decades to come, especially such direct descendents as the Indiana Jones and recent Mummy movies.

Set in 19th Century India and loosely based on the Rudyard Kipling poem, this is the story of three British soldiers and a native Indian water bearer who fight against a fanatical murderous cult. The movie starts with the introduction of the three soldiers in a fist fight. They are Sgt. Archibald Cutter (Cary Grant), the handsome, devil-may-care rebel who is always getting his comrades into trouble; Sgt. 'Mac' Machesney (Victor McLaglen), the muscle bound, tough-as-nails veteran; and Sgt. Thomas 'Tommy' Ballantine (Douglas Fairbanks Jr.), the level-headed, leading man type.

Together with the lowly title character (who longs with all his heart to be a British soldier) they take on hundreds of the murderous cult members. All of this leads up to one of the great climax's in the history of the movies. The three soldiers and Gunga Din have the leader of the cult on one of the towers of the ruins the cult uses as a headquarters. They are completely surrounded by the cult but as long as they keep the leader alive the others will not attack them. More British troops are soon heard approaching but they are marching into a trap. Someone must warn them before it's too late. If you don't know what happens next I won't spoil it for you, but trust me it is a great, great ending.

Cary Grant was originally slated to play the part of Sgt. Ballantine. He is technically the leading man and gets the movies' only romantic relationship (with Joan Fontaine). Grant longed to play other parts and thought it would be much more of a challenge playing the light-hearted, fun-loving Sgt. Cutter. He is wonderful in the part and easily steals the movie away from Fairbanks.

Often criticized for seeming racist by today's standards, this is nonetheless one of the great classic Hollywood movies to come out of the greatest year in Hollywood history, 1939. We live in an era where Hollywood tends to white-wash race relations in movies about America's past, unless of course it is a movie dealing specifically with the subject. At least Gunga Din wears its racism out on its sleave for all to see; where it can only heighten the drama. In my opinion this is far better than movies like Mel Gibson's The Patriot with its happy-as-pie slaves. And besides is it really fair to judge movies made so long ago by the standards of today? I don't think so. Shakespeare isn't criticized for not being modern in attitude, why should great movies?

Believe me Gunga Din is a great movie. Especially for those who enjoy fast-paced, escapist entertainment. If you haven't seen this one, what are you waiting for? 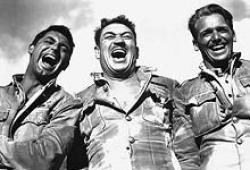 I was not at all bothered by the fact that this is in black and white, but on the DVD's features it shows some of George Stevens home movies filmed on the set.  They are in color and it would have made a world of difference had Gunga Din been in color.  Filmed outside, this wonderful adventure tale would have better stood the test of time had it been in color.

I agree that Cary Grant is great in this role.  1939 saw Grant play roles outside his normal romantic comedy genre.  With this and Only Angels Have Wings, Grant invaded the action/adventure films.  Whereas he played it deadly serious in Only Angels Have Wings, he hams it up as Cutter.  He makes many heavy moments lighter with his charm.  My favorite scene of his is when he walks into the middle of the Kahli ritual, singing loudly so Gunga Din can escape.  The biggest flaw in his performance though, is his there one minute, gone the next British accent.

The ending is memorable, but for me, it felt a bit incomplete.  It never shows a reunion between Ballantine and Emmy.  Before Ballantine goes to the big climactic part of the movie, Emmy begs him not to go as, they are about to be married.  He grabs her and says, "The trouble is you don't want a man for a husband! You want a coward who will run out on his friends! Well, that's not me, never was, and never will be. I don't care how much I love you! And I do very much. I'm a soldi... I mean I'm a man first!"  He then gives her a big kiss and goes to save his friend.  With that kind of a send off, I wanted to see them reunited.  The extras on the disc explained that it went over budget, so perhaps a reunion scene was planned but not shot.

There were three great adventure films made during this time.  They were The Adventures of Robin Hood (1938), The Mark of Zorro (1940) and Gunga Din.  With the advent of World War II, action films became war movies.  It would be years before those old types of adventure films would be visited again, or made as well. 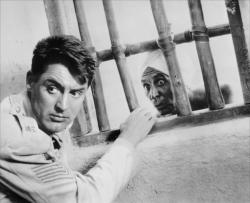 To my mind, this movie is so much in the innocent ripping yarns, boy's adventure story mode that any racism is easy to forgive. The behavior of the characters isn't nearly so bad as the fact that the two main Indian characters are basically in black face. You just have to ignore that and sort of go with it.

Patrick, you mentioned Indiana Jones, and until I watched this movie now for the first time, I had no idea how much of Spielberg's Temple of Doom was an homage to this movie. Both films are set in India, where a Thuggee temple and murderous cult feature heavily in the plot. They both feature a rope bridge that gets cut during the climax. Hell, they both even feature elephants doing silly things in it. Clearly the similarities are too great for Spielberg and Lucas to not have had this movie in mind when they wrote and produced Temple of Doom.

Like you Eric, I couldn't help but notice how Grant's accent comes and goes and is feeble at best. I don't know why he even bothered to try. Fairbanks doesn't do an English accent, so I don't know why Grant bothers to try to do his Cockney. And if he was going to do it, couldn't he at least keep it up for the whole film? Let me stress though that this is no way damages the sense of fun his character brings to the film. I'm very glad the casting fell out the way it did.

Although the character of Gunga Din is so slow and dimwitted that he almost comes across as mentally handicapped and he's a white guy covered in grease paint, it's a real testament to this movie that I was still moved by the ending. Not in a serious way because this is an adventure tale and not a drama, but still more than I thought I would be.

Sequels weren't nearly so common in the 1930s as they are today, but I enjoyed the camaraderie between the three leads so much that I wish they had made one to this movie. Also like you Eric, I wanted to see the scene where Fairbanks is reunited with Fontaine. I want to see her face when he tells her that he's re-enlisting. 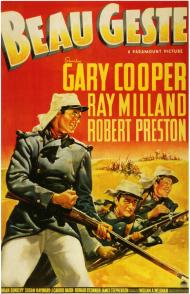