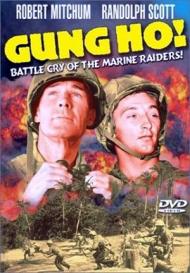 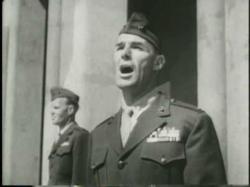 Gung Ho is a factual war movie that not only entertains but demonstrates exactly what Americans were feeling during those early years of World War II. Shamelessly patriotic, Gung Ho is a fascinating historical piece of film. Randolph Scott stars as the real life Colonel who was in charge of training the Second Marine Raider Battalion. This movie set the standard for many World War II movies. It shows a group of men get recruited for the special battalion, then trained and then finally go to battle. This same plot line would be used in many World War II movies including John Wayne's Sands of Iwo Jima (1949).

The movie opens with men being interviewed as to why they want to be in a Battalion that is definitely going to see action and will be very dangerous. One of the question they are asked is, "Why do you wanna kill Japs?" Some of the answers include, "My brother died at Pearl Harbor." and "I just don't like Jap." Another guy says he wants to join to fight fascism.

Scott gives a speech to all of the men who have been selected. He says that to be a united team they need to start by, "...casting out all prejudices racial and religious...every other kind." Every other kind except towards Japanese apparently. The movie makes the point to show the many different ethnic backgrounds of the men in the Battalion. With all of the pontificating about the diversity of the Battalion it fails to mention that there are no African Americans in it. The only black man shown in the movie is the Submarine cook. Politically correct or not, this movie is a great time capsule!

The action scenes are great. If this movie was filmed in color it could have been made today. Many of the main characters get shot or killed. There is even some blood when someone is shot or stabbed. The movie carries a solid level of tension during several scenes. An annoying narrative, however, could have been left on the floor. It is most annoying when the men are doing a beach landing and the narrator is speaking as if it is the soldiers thoughts.

The movie has a side plot of two half brothers who are in love with the same woman. It serves to make the soldiers more human and it does add a little heart to the film. The movie also attempts to give personalities to several characters. They succeed but only to make them one dimensional.

The movie occasionally uses actual footage which adds to the realism and historicalness of the movie. When they arrive at Pearl Harbor, real footage of the destroyed ships blends perfectly with the films mood.

The entire point of the movie is to be a rallying cry for Americans. Gung Ho pulls no punches in it's anger towards Japan. Made two years after the bombing of Pearl Harbor, this movie is very gung ho in being pro American. Randolph Scott gives a speech on freedom at the end of the movie where he starts out looking at the men but ends it by staring directly at the camera.

Gung Ho is a great World War II movie for action sake and even more for historical sake. 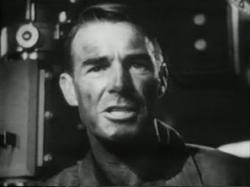 Yes this movie is an accurate time capsule. Some of the views expressed seem incredibly racist today. But then by today's standards society was much more overtly racist then. During the war Japanese-Americans were forced to live in camps, in fact the Japanese soldiers in the movie were portrayed by Filipino and Chinese actors. This same mindset applied today would lead to Muslim Americans being locked up. Eric also pointed out that there are no African-Americans in Carlson's Raiders. It wasn't until after the war that President Truman integrated the United States Military.

Like Eric said the battle scenes are well done. Once the soldiers hit the beaches of Makin Island the action never lets up. The deaths of some of the soldiers are a bit overly sentimental. One soldier's death is accompanied by “The Halls of Montezuma", for example. This will either bring a lump to your throat or make you want to gag, depending on your own tastes.

This movie may well have been a template for later WWII movies, but it was itself an updated version of a formula already well established by movies about the First World War; Wings, All Quiet On the Western Front and The Fighting 69th, to name just a few, all follow a group of young men through their military training and then on to the front lines.

Robert Mitchum, as Pig-Iron, gives an early glimpse of his future screen eminence. Although he is probably more remembered for playing bad guys, here he gets to demonstrate heroics of the first order.

I agree that the voice-over narration is unnecessary and it clashes with the grittiness of the movie's action scenes. But this is one of those unashamedly patriotic war movies that doesn't give a shit how corny it is. You either enjoy this type movie or you don't. 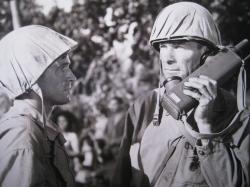 Frankly, I was bored stiff by this by the numbers war film. There are numerous recognizable faces, but none of them stand out. This film may have created the blue print for many war movies to come (although as Patrick rightly points out, it had been done before this), but it's been done done to death and better in so many films since that it's impossible to watch it now with fresh eyes.

Eric mentioned The Sands of Iwo Jima in comparison to Gung Ho. The thing that movie had that this one is missing is John Wayne and his dominant presence. The plot should have stuck with Randolph Scott more, although he definitely lacked Wayne's presence. Instead it spreads itself around amongst all the men and instead of getting to know one or two of them very well, we get to know a tiny little bit about all of them. Enough to make them cliches, but not quite enough to make them three dimensional human beings.

I too concur that the voiceover narration isn't needed. It detracts from the gritty, realistic feel that the filmmakers seem to be trying to create. It's downright cheesy during the beach landing scene that you mention Eric.

The action is fairly good and graphic for the time. There's not much blood or gore by today's standards, but several deaths are still quite violent. However, since I was never drawn in very strongly to any particular character, the deaths of some of the Americans never really resounded with me in a personal manner.

Perhaps the thing I found most interesting about this movie is that it is actually the source of the term Gung Ho in American slang. The marine unit that this movie is based on actually used it as their rallying cry and this movie made it popular with the public. A toy Gung Ho commando outfit for children was even created, whose commercial now seems hilariously dated when watched.

Overall this is simply a generic World War II propaganda film with nothing to make it stand out.