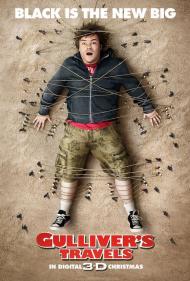 Gulliver's Travels has Jack Black playing an employee of a New York Publication, working in the mail room.  He feels like a small, insignificant person.  He has a crush on the travel writer, Darcy, but does not have the confidence to ask her out.  The presence of a new mail room employee encourages him to talk to her, and Gulliver ends up alone on a boat in the Caribbean to write a story about the Bermuda triangle.  It is a convoluted way to get him to Lilliput, but just go with it.

His boat gets caught up in a huge waterspout and he ends up waking on a beach tied down by an army of little people.  The general calls him a beast and treats him like a captured monster.  He gets chained in a cave where he meets fellow prisoner Horatio.  He was locked up for trying to court the princess, whom the general is likewise attracted to.

The general devises a way to use him for hard labor, but when a fire breaks out in the castle, Gulliver becomes a hero.  He endears himself to the royal family, much to the chagrin of the general.   When Lilliput is attacked by an armada of ships, Gulliver proves himself useful again.  He is made general of the army and becomes a hero to the nation.

Posters of him are put up, and his influences become obvious.  People start dressing and talking differently.   The King has a home built for him.  It includes a theater which does plays of Gulliver's life.  The whole town comes to see Gulliver's autobiographical plays.  They were in awe when Gulliver fought Darth Vader and found out he was really his father.  They all cried when Gulliver died after the ship sank, leaving Rose floating in the middle of the ocean.   So he embellished his life a lot.  What do these little people know?

The general gets so ticked of that "the beast" is everyone's hero, and has taken his job, that he runs off to join Lilliput's enemy.   He devises a plan and Gulliver and Lilliput find themselves in danger.  Meanwhile Darcy has likewise found herself on the ocean being carried away by the same water spout.

Black walks through this role like he is playing every other character he has ever done.  He sing some rock songs and acts stupid.  He is playing his signature likable character.

Most of the laughs come from pop culture references and bathroom humor.  One unfortunate small person gets sat on while Black's pants are pulled down.  "Unlucky."  He notes to himself as Black's nether orifice engulfs him.    I bet you can't guess how Black puts out the castle fire?

Gulliver's Travels is a nice family film, with great special effects.  It also contains just enough humor for the older crowd.  At one point the princess asks the general what he likes about her.  He points his finger at her bosom.  Gulliver helps Horatio romance the princess by having him quote lyrics from Prince's song Kiss.  This movie will not make anyone's best film of the year list, but you will not regret seeing it. 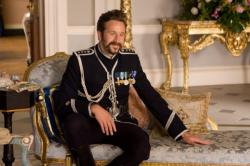 Okay, so I don't regret having seen this movie, but I didn't enjoy it as much as you seemed to Eric. You call it a family film, but really it's more of a children's film. There's not much in it that's aimed at the older crowd. That doesn't mean I didn't laugh at some things, but the laughs are pretty cheap and easy.

I was excited when I saw the long list of British comedians who starred as the Lilliputians, but what a waste of talent! You've got Catherine Tate, Billy Connelly, Chris O'Dowd and James Corden and all of them except Chris O'Dowd as the general are in parts that could have been played by anyone. Granted those names don't mean as much in the US, but in the UK, that's a group famous enough to get people excited. They might as well have saved their money and given these generic roles to unknowns with what little the comedians are allowed to do though.

O'Dowd at least, who with this and Bridesmaids is perhaps making some headway in America, gets to generate a few laughs. His courting scenes with Emily Blunt are some of the funniest in the movie.

Black plays Black, the same as he always he does. If you enjoy his antics then you'll get some enjoyment out of him here. Frankly, I feel like his shtick has long since worn thin. By the time he performs "War" at the end of the film, I was happy to see the end of him. I agree with you Eric, that this is Black's signature character, but I wouldn't use the word "likable".  He's kind of annoying.

As a mild and childish diversion, this movie has some limited charms, but not many.

The CGI effects look less real on the small screen.

I’m more in agreement with Scott on this one. I don’t completely regret watching this movie (thankfully it runs only about 80 minutes) but I would never recommend it for anyone over the age of 10. As with most CGI work the special effects never look as good on the small screen as they do in theaters. To me it looked as if the proportions of Gulliver compared to the Lilliputians changed from scene to scene.

I agree with Eric about Jack Black. I think he is talented and likable. I agree with Scott about Chris O’Dowd. He is very funny and has a certain captivating charm when being silly. Emily Blunt garners a few laughs with her florid fairy tale manner of speech.

The funniest scenes to me were when Gulliver goes to the Island That Shall Not Be Named. It is inhabited by giants and Gulliver becomes a toy for a young girl who puts him in a dress and forces him to live in a doll house. I laughed when Gulliver took the helmet off of a fellow toy only to discover a dead guy’s skeleton inside. It is the only subversively funny moment in the movie.

Gross-out humor has pervaded today’s children’s movies. I, for one, didn’t need to see Gulliver peeing on the tiny Lilliputians. In years past the gag would have ended with the sound of him unzipping, but in this brave new world that isn’t enough. Now we have to see the thick stream of urine engulfing the characters and splashing all over their faces.

Gulliver’s Travels is a mildly amusing update of a classic story but I’ve nearly forgotten it already.