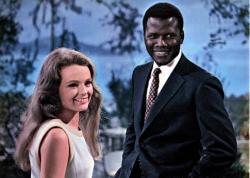 Katharine Houghton and Sidney Poitier in Guess Who's Coming to Dinner.

In 1967 Guess Who's Coming to Dinner? was a socially progressive film. Today it seems quaint, yet still relevant. Lead by a memorable cast, this movie rises above its weaknesses.

Joey Drayton, played by Hepburn's real life niece Katharine Houghton, a fresh-faced innocent looking young girl, arrives home from Hawaii with her new fiancée, Dr John Prentice. But wait. John Prentice is 'a Negro', as described by 'Caucasian' Joey, to her mother. Before the parents can get all of their objections sorted out, they have John's parents coming to dinner as well. Both sets of parents have reservations about this union.

The movie glosses over the subject of interracial marriage without getting too detailed. The big objections are that they may get negative reactions from other people. Poitier's Dr Prentice is portrayed as an in-law's dream. He and Joey haven't even had sex yet. Joey walks around looking angelic and clueless. Their relationship and chemistry in the movie is weak.

The greatest things about Guess Who's Coming to Dinner? are the characters of Joey's parents, Matt and Christina. Matt is a liberal journalist (as if there are any other kind) whose liberal thinking is put to the test by the intended nuptials. The best scenes are when Matt and Christina discuss the issue at hand. This was Tracy's last movie, but his onscreen chemistry with Hepburn is as great as ever.

Poitier, being the only leading black actor at the time, was terribly miscast. Why the parents never question the age factor is beyond me. Poitier has got to have 15 to 20 years on Houghton. As a parent, that would have raised more eyebrows with me than the skin color. Poitier's acting is adequate at best. What is with those hand gestures he makes in the scene where he is talking to his father?

Hepburn's and Tracy's characters and performances save this film. Their liberal views are challenged when a social issue comes home by means of their only daughter. In this we find the greatness of this movie. It holds up the question to all who view it. Do we just support things when they apply to other people, or are we actually as liberal and/or conservative as we think when it comes to practicing what we preach? 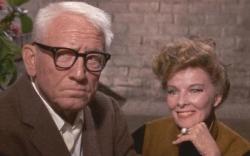 Spencer Tracy and Katharine Hepburn in Guess Who's Coming to Dinner.

I love this movie. It symbolizes everything good in the human spirit to me. And although style wise this movie is dated now, the underlying theme is as relevant today as it was all those decades ago.

There were two obvious ways this movie could have been made. The father could have been an ignorant 'Archie Bunker' type reactionary, which could have been played for broad laughs. The other option is the one they, wisely, chose. The fact that the father is an intellectual liberal forced to face his own buried prejudices allows the movie to resonate much deeper and, therefore, its message holds up well after all these years.

How many liberals, even today, publicly decry racism but would balk at the concept of their daughter marrying a black man? On some deeply personal level most of us are still racist, at least to some degree, whether we admit it or not. In Guess Who's Coming to Dinner Spencer Tracy's character comes to realize this. He doesn't like the feeling and he is able to overcome his prejudices.

Of course he never actually admits that his feelings are racist, but it is clearly implied if you read between the lines. Eric is right when he says that the only objection they vocalize is the fact that society will treat the young couple harshly. And although this is a valid and probably accurate objection, it is fairly obvious by the attitudes of both fathers that the issue is closer to the bone for both of them.

That said I disagree completely with Eric's statement of there being no chemistry between Poitier and Houghton. I think they are a perfect example of two people who are as surprised as everyone else at finding themselves completely head-over-heels in love. They seem completely comfortable and natural around each other and their behavior seems to be a truthful example of how two people who have known each other a short time and are still in the first giddy joys of love, would act. As for Eric's problem with the age difference, that's just ridiculous. She is 23 and he is 37, certainly not enough of an age difference to be a huge deal.

I always enjoy the supporting characters in this movie. There is the black maid (Isabel Sanford) who doesn't like the idea of Sidney Poitier's character "getting above himself". There is also an interesting scene where a white delivery boy (Skip Martin) dances off with a black girl, suggesting the possibility of them being a couple as well.

I also appreciate the relationship Chris and Matt have with the Monsignor. They are self-proclaimed atheists and he is a scotch swilling priest. Yet instead of making fun of him, as a movie today would, he is shown as one of the most intelligent and understanding religious figures you will find in any movie. In today's politically correct world you couldn't show an alchohol imbibing priest as anything but a tragic figure or a joke. In Guess Who's Coming to Dinner he's a hero.

Finally, I have to agree with Eric as far as the chemistry of seeing Tracy and Hepburn on the screen together one last time. This is easily their best performance as a couple. He is frail but still has a formidable presence and gives emotionally truthful line readings. The adoration Hepburn felt for him is painfully obvious. She clearly knew he was close to death at the time and it adds to her intensity. If you are not moved during his final speech when he gets teary eyed looking at her as she stares adoringly back at him then "in the final analysis" I feel incredibly sorry for you.

I watch this movie whenever I am feeling down or disappointed by humanity and it has never yet failed to uplift my spirits and put a smile on my face. 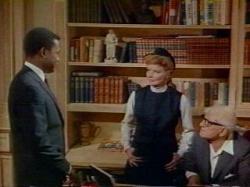 Sydney Poitier, Katharine Hepburn and Spencer Tracy in Guess Who's Coming to Dinner.

Eric thought the age difference between John and Joey was cause for concern, but to me, the biggest thing I would be worried about if I were parent of either of them is how quickly they decided to get married. Going from having just met to wanting to get married after only 10 days is hardly enough time to really get to know the other person. Sure, quick marriages have worked and some people who have known each other for years still end up in divorce, but it would still be the first thing I brought up in conversation if I were one of their fathers.

Like Eric, I also didn't find the chemistry between Poitier and Houghton to be particularly strong. We are meant to believe that these two met and fell in love at practically first sight and knew that they wanted to spend the rest of their lives together almost immediately. Yet, while they seem comfortable around each other, they demonstrate none of that fiery passion on the screen. They stand around and rationally discuss their relationship, but the burning desire that demands they get married as soon as possible is absent. The lack of physical contact between them can be attributed to attitudes of the time. While several scenes of Houghton and Poitier kissing were filmed, all but one of them was edited out of the film. Apparently the studio felt that audiences of the day could handle people talking about interracial love, but not actually seeing it demonstrated physically. It reminded of movies from the 1980s and 1990s that featured gay couples, and even to some extent those still made today, where it was okay to show gay characters so long as they weren't physical with each other.

The other problem with Poitier's character is that he is nearly perfect, almost a saint. I mean, here you have a doctor who spends his time treating the poor and sick in third world countries around the globe. He's so honorable that he won't have sex with Joey until they're married and is willing to sacrifice his own happiness if her parents don't approve of their union. If he were white, Joey's parents would probably ask their friend, the monsignor, to marry them on the spot before John changed his mind, except of course he never would because that wouldn't be honorable.

This movie does seem quaint when looked at from a modern perspective and not just because of the way it handles the interracial relationship. At one point Joey uses the word 'bitch' and later sort of talks about sex with her mother. You can tell from the way these scenes are filmed that they're meant to be adult and possibly shocking when today they are so commonplace you wouldn't think twice about such moments.

As my brothers wrote, the biggest joy of this movie is watching Tracy and Hepburn act together one last time. Tracy was very ill at this time and Hepburn knew it. The studio resisted casting him because he was uninsurable. To accept the part he had to put his salary in escrow where it would be forfeited should he die before filming was complete. Due to his physical frailty he was only able to shoot for half the day. The two of them are so comfortable around each other that their onscreen relationship seems to be a part of themselves as it often does with couples who have been married for a long time. So many aspects of this movie are dated, but their performances demonstrate the timeless appeal of two old pros doing what they do best.