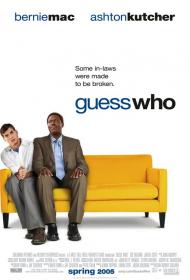 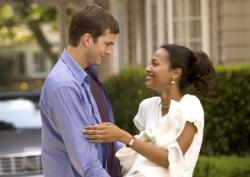 Ashton Kutcher and Zoe Saldana in Guess Who.

Guess Who is supposedly a remake of Guess Who's Coming to Dinner?, but in reality it's more like a remake of Meet the Parents, only this time the in-laws are black and the future son in-law is white. While Kutcher and Mac do show some chemistry between them, the jokes are all retreads of jokes we've seen before and any commentary about race relations is handled so blandly as to offer no new insight.

Kutcher plays Simon Green, a Wall Street wiz who quits his job the day before he is to meet his future in-laws. When his fiancée Theresa informs him that her father (Bernie Mac) is a stickler for her boyfriends having jobs, he decides to keep the fact that he quit a secret from her and her family.

Theresa has also kept a secret from her family. She never mentioned to her mother, father or sister that her boyfriend is white. When they arrive at her parent's house in a small town in New Jersey, there is some awkwardness, particularly after Percy, Theresa's father, mistakes the black cab driver for Simon.

Apart from this initial meeting and a scene later where Percy coerces Simon into making black jokes over dinner, the racial differences are pretty much ignored, which is a pity because these are the only two scenes with tension and the best laughs. With very little rewriting, Simon could have been black, or Theresa's family could have been white and then the plot would really have been just a rehashed Meet the Parents. Percy's objections towards Simon stem more from the fact that he's an overly protective father than from any racial differences.

It is only Bernie Mac and Kutcher that manage to raise this movie a tiny bit above the obscurity to which it belongs. Their scenes together are the funniest, as when Percy insists on sleeping with Simon to insure that Theresa gets a good night's sleep, and when Percy challenges Simon to a go-cart race. They're cheap laughs, but they're the best this movie has to offer.

When the original Guess Who's Coming to Dinner? was released an interracial couple was a scandalous thing. But even today, nearly 40 years later, it's not the most common of situations. Quite recently, Broadway star Idina Menzel and her husband Taye Diggs received death threats concerning their interracial marriage. This is still a subject that could lend itself well to a movie, but Guess Who shies away from any sense of controversy, settling instead for mild humor.

Light and fluffy, Guess Who is a mildly entertaining movie that could have been more had its makers been a little braver. 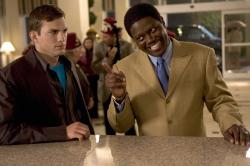 Ashton Kutcher and Bernie Mac in Guess Who.

The greatness of Guess Who's Coming to Dinner is the story ark of Matt and Christina Drayton honestly coming to terms with the fact that their white daughter is marrying a black man. The problem with Guess Who, as Scott already wrote, is that it does not have the balls to have the parents ever actually admit that they have a problem with their future son-in-law's skin color.

The love story alone is mildly cute but uninspired. The gimmick of the movie is race. However, the only time this movie addresses the racial difference is in an occasional politically incorrect joke, such as, "Why can't black people listen to country music? Because every time they say "hoe-down" they think their sister got shot." Percy and his dad use the words, "honkey", "Casper", "cracker" and several other derogatory names for white people so everyone is equally belittled.