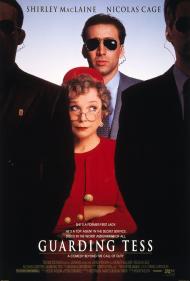 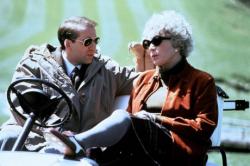 Guarding Tess works because of the performances by Shirley MacLaine and Nicolas Cage. The plot is a variation on one we've seen before where a cantankerous older person bonds with a younger person after treating them like shit for most of the movie. MacLaine is a widowed former first lady and Cage the secret service agent in charge of keeping her safe. They bicker for the better part of the movie before she gets kidnapped. All of which is neatly wrapped up and tied with a bow in about 90 minutes of screen time.

The comedy works better than the drama.

Every time Tess is upset with Doug she calls the current President of the United States to complain. She and her husband were instrumental in helping the president's career and he always takes her calls.

Austin Pendleton has a decent role as the chauffeur. He has one very good scene in a hospital room that I won't spoil for those that haven't seen it.

Although neither part was a stretch for the two main stars they have nice chemistry together. Cage as Doug struggles to keep his cool while dealing with the demanding and condescending Tess. She treats him more like a servant than a bodyguard. Shirley MacLaine, as Tess Carlisle, earns your begrudging respect. She's an arrogant bitch but thanks to the talents of MacLaine there are enough glimmers of humanity that peek through to earn the audience's sympathy.

By the end of the movie Doug has earned her respect and even admiration as the scene at the hospital shows. When Tess refuses to sit in a wheelchair upon leaving the hospital Doug tells her to... “Get in the god damn chair.” She hesitates for a brief second before obeying his instructions. She then pats his hand while saying, “Hmm. Very good, Douglas. You're going to be all right.”

With Guarding Tess you get exactly what you expect. A finely acted two person movie with some laughs and a few dramatic moments along the way. MacLaine was nominated for a Golden Globe. 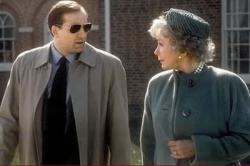 We have seen the plot where a cantankerous older person bonds with a younger person before, as Patrick wrote. As I started to watch this film I was struck by a vaguely similar thought. How often has Shirley MacLaine played an old bitch? Click on her name in the cast list and you will see a filmography of roles where she plays lots of ornery old people. It has basically made up the majority of her roles the second half of her career.

Patrick wrote that, "The comedy works better than the drama." I agree, but then I would also describe Guarding Tess as, at best, warm. It never gets very dramatic or laugh out loud funny. We do come to like Tess and Doug but we never get to know them very well. Basically, he wants to move on with his career while she is lonely. Everything is on the surface. We never find out why she rarely gets visitors.

The scene where Tess goes grocery shopping is indeed one of the funniest sequences in the film. MacLaine easily steals the movie and provides what laughs there are. After Tess gets abducted, Doug shoots a suspect's toe off to gain information on her whereabouts. Later, after Doug tells Tess that he shot someone's toe, she responds with pity, "After all that practice." My favorite moment of hers is when she personally makes a phone call to the current President and calls him casually by his first name.

MacLaine may play lots of old bitchy women, but she is so damn good at it!