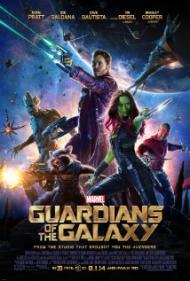 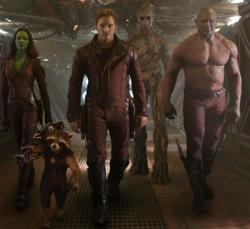 Meet The Guardians of the Galaxy.

Guardians of the Galaxy is based on the Marvel comic book of the same name that first premiered in 1969. It is the tenth film in the Disney owned, and ever expanding, Marvel Cinematic Universe series of comic book-to-screen adaptations. It will no doubt add to your enjoyment of this movie if you are familiar with the comic book but even if you've never heard of Star-Lord, Rocket Raccoon, Gamora, Drax the Destroyer, or Groot, Guardians of the Galaxy is still a great time at the movies.

It begins in 1988 in Missouri. As a young boy, Peter Quill is abducted by a group of space pirates right after a teary deathbed scene with his mother. His one prized possession being his Walkman and a cassette tape of classic 1970s pop songs beloved by his mother. Several scenes are underscored by iconic tunes from that era, which provides not only a bit of feel-good nostalgia but also grounds the movie in just enough reality by giving the audience an earthly reference point.

The story then jumps ahead in time 26 years where the now grownup Quill is an interstellar mercenary calling himself Star-Lord. He steals a mysterious sphere like object and immediately finds himself at the center of a dangerous intergalactic struggle for the powerful orb. During a physical confrontation over this orb Quill meets Gamora, and Rocket and Groot. Gamora is a green skinned killing machine played by Zoe Saldana. You just know that she and Peter will eventually create some sort of romantic sparks together even if their relationship does get off to a very violent start.

Rocket is a talking raccoon (the result of extensive scientific experiments), who sounds like he's from the mean streets of Brooklyn, and Groot is best described as part humanoid, part tree, rather like a smaller Ent from Middle-Earth. His catchphrase being, “I am Groot”. Something he repeats over and over. Rocket alone understands that he means something different each time. John C. Reilly as Rhomann Dey explains him like this, “Groot: he's been traveling recently as Rocket's personal houseplant slash muscle.”

These four wind up in prison at one point where they meet the fifth member of their group, a tortured soul called Drax the Destroyer, whose only goal in life is to avenge his wife's and daughter's deaths at the hands of the evil villain Ronan. But the plot isn't really that important. The fun in watching Guardians of the Galaxy is in the fast-paced action/adventure and the humorous interactions between this motley assortment of characters. The jokes are plentiful and these are some of the most purely entertaining creatures to hit the big screen in quite some time.

The entire cast is great from the smaller roles by Djimon Hounsou, and Benicio del Toro right up to star Chris Pratt. Bradley Cooper provides the voice for Rocket and he steals nearly every scene he's in. Vin Diesel has much less to say but he's equally effective as the voice of Groot. The incredibly ripped Dave Bautista brings some poignancy to the role of the tragic Drax the Destroyer, and Zoe Saldana proves that a woman can handle action scenes as well as any man.

Chris Pratt is a revelation as Peter Quill/Star-Lord. This role should launch him into the stratosphere. Physically he looks the part of an action hero, having lost more than 50 pounds and worked out strenuously to develop six-pack abs before filming began. His deadpan comic delivery is perfectly suited for the irreverent humor in the movie. Not since Will Smith in Men in Black has a former television star burst onto the big screen in a role so successfully combining action with laughs.

Guardians of the Galaxy is a winner! It's yet another feather in the cap of the Marvel Cinematic Universe.

Karen Gillan in Guardians of the Galaxy.

With a projected $90 to $100 million opening weekend, near universal critical acclaim, and a sequel already announced, I'd say it's a winner indeed. While Patrick might be right that those familiar with the source material might appreciate some of the inside references, even those without any prior knowledge of the Guardians, such as myself, should find plenty to enjoy here. There's enough action, humor and unique characters to please anyone.

Although many articles refer to this movie as a super-hero film, that term doesn't really do it justice. In plot and humor it has more in common with a 1980s science fiction movie than it does with more modern earth bound super-powered blockbusters. It's been a long time since a movie that spent so much time onboard a spaceship was such a hit.

The one thing this movie has going for it over those sci-fi hits of yesteryear is the quality of its special effects. Using today's computers and modern techniques, the filmmakers are only limited by their imagination. The planets, the ships and the battles are all extremely well done and are well worth seeing in IMAX 3-D. The tree-like Groot and Rocket the Raccoon are likewise well done and you easily accept them as characters in the same way you do those played by the human actors.

Of course, all the special effects in the world can't make a movie good. What makes this movie so enjoyable is its characters and their camaraderie. Director James Gunn wisely puts the characters front and center and the script co-written by Gunn and Nicole Perlman gives them plenty to say, providing lots of laughs in the process.

Gunn was also fortunate that he was able to assemble such a cast to bring his words to life. Chris Pratt is perfectly cast as Peter Quill and he plays him like Han Solo's distant cousin. Bradley Cooper's voice is almost unrecognizable as Rocket, but as Patrick wrote, he is the film's biggest scene-stealer. He plays well off of Bautista's literal minded Drax. The villains don't fare quite as well as the heroes. Ronan is evil, but not particularly interesting or deep. Only Karen Gillan's under used Nebula provides any spark on the dark side.

Having such a great cast playing such colorful characters helps hide the weakish plot, which consists simply of finding and holding onto a mysterious orb. Fortunately, not much plot is required. All it needs to do is provide a reason for this motley crew to get together and have an adventure, which it more than amply provides.

For sheer entertainment value, this is the movie to beat this year. It's a perfect summer popcorn movie and should be enjoyed on the biggest screen possible. 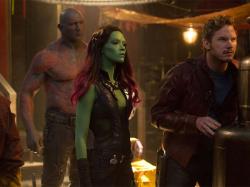 Dave Bautista, Zoe Saldana and Chris Pratt in Guardians of the Galaxy

With Guardians of the Galaxy, fun returns to the movies. It combines action/adventure with humor better than any film in years. Sure, many superhero films have jokes in them but they too often fail, destroy the tension or simply come out of nowhere. If you look at such recent releases as Lucy, Hercules and Dawn of the Planet of the Apes you find adventure films that take themselves far too seriously.

Patrick compared Chris Pratt to Will Smith and his break out role in Men in Black, and I agree. After providing the voice of Emmet Brickowoski in The Lego Movie, the animated hit earlier this year, and now this, Pratt is quite easily the biggest star of the year. Scott compared Peter Quill to Han Solo and I see his point but I find that this film is closer to Raiders of the Last Ark than Star Wars. Look no further than the first scene with Star Lord finding the artifact among some ancient ruins. I also found the light tone of the character more in line with Indiana Jones. Guardians of the Galaxy is as much fun as movies George Lucas used to make, several decades ago.

I have been a Chris Pratt fan for several years now, so was none too surprised to see him succeed so well in this part. I know what kind of comic talent he has from his role on televisions "Parks and Recreation" and he already did the buff thing for Zero Dark Thirty (2012). In fact, it was that role that convinced the producers to give him a shot as Star Lord.

The real surprise for me was former WWE star Dave Bautista in the role of Drax. Not only does he provide the muscle but also some humor as Drax takes everything literally. When Peter tells him he will get a chance to kill Ronan, Peter does so by swiping his finger across his own throat. Drax does not get the earthly gesture and asks why he would want to touch Ronan’s neck with his finger.

This film’s soundtrack has garnered much attention. It has brought back interest in those classic 70s songs just as the Dirty Dancing soundtrack did for early 60 hits. In my opinion, it put “Hooked on a Feeling” by Blue Swede, to better use in the trailer than the movie. In fact, the week before the trailer broke the song sold a “negligible figure” according to Itunes but on the day the trailer was first shown there were 2,000 downloads. The most it has sold since it originally topped the charts on April 6, 1974 and it has continued to sell well.

Guardians of the Galaxy is the kind of fun film we all hope to find at the movies but so rarely do, at least not ones made this well.