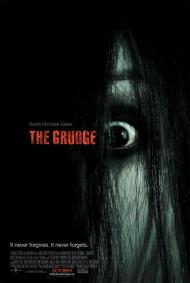 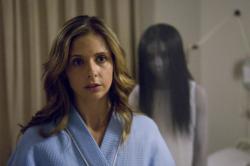 Sarah Michelle Gellar in The Grudge.

The Grudge does the one thing that I absolutely hate when it comes to horror movies. It has an ambiguous ending. I don't mean that it just leaves room for a sequel (it does), but that the ending leaves nothing resolved. It's enough to make a person hold a grudge of their own.

Sarah Michelle Gellar (who left Buffy: The Vampire Slayer to do movies like this, why?) plays Karen, a foreign exchange student living in Japan with her boyfriend. To earn a credit in social work she goes to the home of an invalid to care for her for the day when the normal caretaker goes missing. She quickly learns that the house she visits is filled with really pissed off ghosts. At a climactic moment during Karen's first confrontation with a ghost, the movie flashes back and some of the history of the house is revealed and clues to the origin of these particular ghosts are given.

Although most horror movies are light on plot, The Grudge is even lighter. It's really just a series of scenes designed to be creepy and scary enough to make you jump in your seat. To be fair, the movie does accomplish that on numerous occasions. It's very stylishly filmed and the ghosts are particularly disturbing at times.

With the scares being the real stars of the film, there's very little for the actors to do except behave in the most stereotypical horror movie way. There's constant creeping around to investigate noises in dark places. People are running upstairs instead of getting the hell out of the house. No one ever thinks to call the police when they think there's an intruder in the house. Gellar, who truly is a good actress despite her recent movie choices, has very little to do apart from looking frightened and then serious alternatively. Bill Pullman, the only other real 'name' actor in the movie does ok, but has a very small part.

The story is set in Japan, but very little is made of it. Apart from the detectives investigating the bizarre happenings, all of the main characters are American. Unlike Lost in Translation where Tokyo played a major part of the story, this movie could have been set anywhere in the world without losing anything.

For those looking for the slimmest of vicarious thrills, The Grudge manages to provide them. Unfortunately, that's all it does provide. 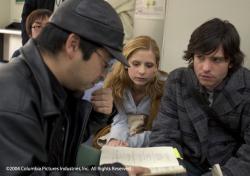 In this scene I want you to act scared, just like you did in every other scene.

Imagine you are alone in a house with an invalid.  There was a recent well publicized double homicide/suicide in this home.  You hear a noise coming from the dark, cobweb covered attic.  Do you A. Go and investigate.  B. Ignore it as the invalid is on the main floor and you have no reason to go snooping around someone's house or C.  Get the hell out of there?  As this is a horror movie, you know option A is the only real choice.

The Grudge is horror movie 101.  Spirits haunt a home and kill all  those who dare enter it.  I kept hoping for an old Japanese lady, with a squeaky voice to show up, do a seance, and announce the house is clean, but apparently Shimizu never saw Poltergeist.  The only unique angle is that it takes place in Japan, but as Scott wrote, it makes no difference.

There are a couple of creepy moments, but not enough scares to make this movie great.  With Gellar in the lead role, I could not take this movie serious.  I was waiting for the moment when she would take the stupid black wig off the boy and yell, "Old man Smithers!"

For some reason The Grudge was a hit.  It spawned sequels and parodies.  I found it too paint by numbers.  Most kills can be seen long before they happen.  The lady hears something in the hall so she hurries along.  She then sees something and starts running.  She thinks she is safe when suddenly.....