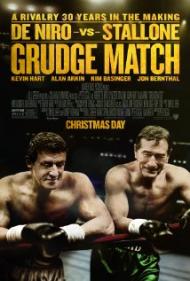 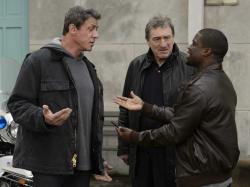 Sylvester Stallone has such a history associated with boxing that my 20 year old son even asked me if he was a real professional boxer. His character, Rocky, has left such a strong impression on the American psyche that everyone knows that character. In some ways, Rocky has become real. He is Stallone’s legacy, plain and simple. Stallone may be playing a former boxer here named Henry 'Razor' Sharp but it is really Rocky we came to see.

Robert De Niro likewise has cinematic boxing history. In 1980 he starred in Raging Bull as boxer Jake La Motta, for which he won an Academy Award. Although that film did not make the pop cultural impact of Rocky, it did set a standard of dedication to a role as De Niro gained and lost a severe amount of weight for the part.

70 year old De Niro and 67 year old Stallone play former boxing rivals whose bad blood spilled outside the ring. 30 years ago Stallone walked away from a bout with De Niro for personal reasons that are later explained in the film. This left their rivalry open ended.

Kevin Hart plays the son of a former promoter who accidentally gets the old timers together to produce some computer visuals for a boxing video game. The two get into a fight that goes viral. This prompts some money men to entice the old codgers back into the ring for a grudge match. Enter an estranged son and an old flame and we have the potential for a great story, “potential” being the key word.

Grudge Match is first a comedy. Alan Arkin and Kevin Hart provide most of the laughs. Their scene heavily shown in the previews is one of the best. After Arkin calls Hart “Webster”, Hart responds, “I choose to believe that you just called me Webster because of my dictionary-sized vocabulary, NOT because of my height and race!” Arkin corrects him, “Nope, it's because you're short and black!” Not to be out done, Hart returns with, “What was Jesus like? I'm curious. Was he cool?”

That scene is funny to me and anyone else who knows who Webster is. The problem is that joke went right over the head of my 20 year old and likely most 20 year olds. In another scene, Arkin and Stallone walk through a warehouse of hanging sides of beef. Arkin tells Stallone not to hit the beef as that is not sanitary. This is yet another joke you will only get if you know the reference.

The film attempts to have some heart with Stallone and Kim Bassinger, who looks incredible for 60, playing former lovers reconnecting after so many years. There is also a side plot about De Niro and his son, played by Walking Dead’s Jon Bernthal, coming to a new understanding. Bernthal plays B.J. and there are several sex jokes made about his name. None are all that funny, but then they bring B.J.’s young son into the jokes and they also become a little inappropriate.

Try as they might to force it, the film never drew me in. There was room for some decent drama, but the script never gets there. What we are left with is some humor and nostalgia. Grudge Match is for life long Stallone and De Niro fans. Like them, the plot is old and worn but it sure was nice seeing these old guys still kicking and hitting after all these years. 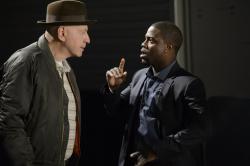 As a comedy Grudge Match is occasionally funny. Whenever it gets anywhere near drama, however, it turns into pure hokum. As Eric said, the script fails to engage the audience in any sort of believable way. It's filled with cliches and contrived situations. Whatever nostalgia it may have conjured is ruined by the inept script and hackneyed dialogue.

I'm sorry but Stallone and De Niro are just too damned old for these roles. Hell, even thirty years ago they were both a bit long in the tooth to be playing still active professional fighters. Stallone at least has kept himself in great shape, but De Niro cannot be taken seriously in any of the fight scenes, especially when he is shown training and knocking down guys half his age.

Basinger may look good for sixty but hers is a thankless role that could have been played by any number of aging actresses. She does nothing to distinguish herself in the part. Ditto John Berthal as De Niro's grown-up son. I never bought the relationship between them. And where was his son's mother? She never even gets a mention.

Thank goodness for Alan Arkin and Kevin Hart. They are the only bright spots in the movie. Eric mentioned their scene together but even separately they provide whatever humor there is to be found in this tired script. Arkin has such a great deadpan delivery and he has lately cornered the market on wisecracking old guys. Hart is an up-and-coming comic with great timing. They alone are used to advantage here.

Very few formerly great stars have sunk as low as Robert De Niro. It has almost gotten to the point where if his name is on a movie marquee then you can be pretty sure it's a stinker. Discernment in script choices is clearly something he cares nothing about. Stallone fares better as he was never considered to be a serious actor anyway (OK maybe for a minute in the 70s after the first Rocky movie). Still it is long past time for both of these guys to hang up the gloves for good. A better idea is an odd couple buddy comedy starring Arkin and Hart. 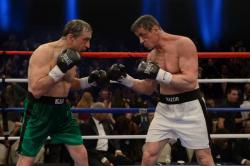 In a recent interview Stallone admitted that it was De Niro who talked him into taking this part. He was worried that a comedy about boxing might tarnish the legacy of Rocky. Perhaps he's unaware that the tarnishing of that legacy started the second he signed up for Rocky 2, and the tarnishing has only grown stronger ever since. However, at least he's thinking about his legacy. De Niro doesn't seem to give a damn about his. As Patrick wrote, he has gone from being one of the most respected actors of all time, to something of a joke; appearing in dud after dud. How does he keep getting work? On name recognition alone, I imagine.

To be fair though, and as my brothers pointed out, it's not really the fault of the actors that this movie is so poor. The blame lays squarely on the writers. Believe it or not, it took 3 writers to make this movie. The biggest film two of them had worked on prior to this one was the 1996 Walt Disney film, First Kid, starring Sinbad. They'd also written for the 1990s comedy sketch show, In Living Color, which might explain why it's in the comedy that this movie works best.

The casting of De Niro and Stallone gives the film weight and they each bring a boxing movie legacy to their parts. Because of this the filmmakers are able to do some clever CGI trickery at the beginning of the film to make it look like the two really fought each other, although some of it is more convincing than other parts. But perhaps their presence creates the expectation of too much drama. The jokes mostly stay away from the central characters. Perhaps more laughs about their age and the ludicrousness of the central plot device would have helped. This might have been passably believable when these guys were in their 50s, but not 67 and 70.

Patrick wondered about De Niro's grandson's mother, who never gets a mention. The thing missing in the script that I noticed was an explanation of how Stallone was able to pass his physical when he was blind in one eye.

Lastly I will just echo my brothers in their praise of Arkin and Hart. They are the only things to provide a spark at all to these grim proceedings. They are funny on their own and deliver even better banter when they're together. Without them there would be almost nothing to praise about this film.