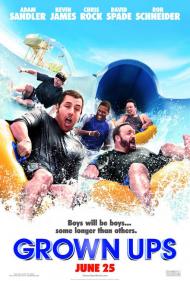 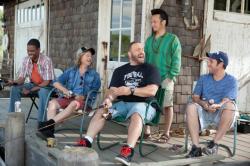 I wonder where the kids are? They obviously do not.

After the death of their middle school basketball coach, five, fortyish friends get together for the funeral and spend a 4th of July weekend on a lake with their wives and children in tow.  Sandler is a wealthy Hollywood agent, his wife a fashion designer.  James is playing James.  Rock is a house husband.  Spade is an old horn dog.  Schneider is a vegan who likes old women.

They cut each other down in jest.  They ogle hot girls.  They complain about the lack of sex in their marriage.  They reminisce about their coach.  As an after thought, they spend a little time with their children.

Their parenting skills are what I found most interesting.  All have horrible children.  Early on, we see Sandler's spoiled kids texting their nanny for hot chocolate, as they play video games.  Then they are rude to her when she brings it to them and they do not like the taste of it.  Sandler watches this and never corrects his kids manners.  Rock's kids make fun of his cooking.  James's daughter throws a fit when when they make a suggestion about the cake she is eating.  None of the parents ever discipline their children.

The one and only parenting moment is when Sandler, James and Rock finally make their kids get out of the house and stop playing video games.  The parents barely spend any time with them, choosing instead to hang out with each other, while their kids are no where to be seen.  Of course this is a fictional story but Sandler has two children in real life, and wrote this with former Saturday Night Live writer Fred Wolf.   Makes me wonder if spare the rod and spoil the child is common parenting practice in Hollywood.

Sandler's character is a wuss.  He brings his kids nanny along, but is embarrassed to call her that in front of his "common" friends.  If he is so insecure about his wealth , why bring her?  He unplugs a bug zapper after his daughter discovers that it kills insects.  Yeah, after she gets a few mosquito bites she probably will not mind so much.  He lets his old rival win the basketball game because his family looks poor and ugly.   Seriously, the only thing he knows about them is that the guys wife is fat, has a big mouth and is drinking a beer.  She looks like an ordinary red neck to me.   If Sandler walked into a NASCAR event he would probably feel compelled to hand out tens and twenties?

My fourteen year old loved this movie, but he is Sandler's and James target audience. I kept waiting for an adult to act as such and for one of the kids to get a spanking.  I liked a couple of jokes, such as when Hayak tries to skip a stone and when Rock tells Meadows to go find his own white people.   As a father I found this film to be more annoying than funny. The message is to just provide a whole lot of shit for your kids to do and something will eventually make them happy. These dads spend minimal amount of time with their kids and when they do it is to show them how to sneak in line at a water park.   Instead of The Fourth of July maybe they should have released this movie on Fathers Day. 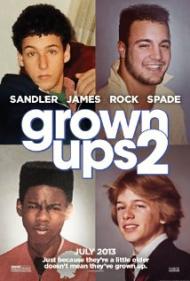