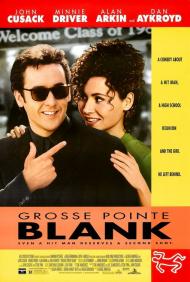 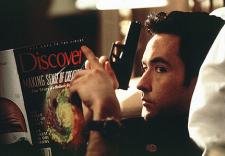 Gross Pointe Blank has been the highlight of John Cusack's career so far.

The hitman seeking redemption, often via visits to a psychiatrist is practically a genre in itself. It's certainly been done enough times. Gross Pointe Blank is one of the very best of that type of movie. It features action, some great comedy and a very talented cast.

John Cusack plays Martin Blank, a professional hitman who is stricken with a case of ennui. After he botches a couple of jobs, one of his clients "asks" him to take care of a job in the Gross Pointe suburb of Detroit, Michigan, as a way of making up for his mistakes. Coincidentally, Gross Pointe is where Martin grew up and is where his 10-year High-School reunion is about to take place. Reluctantly, Martin takes the assignment and decides to face his past, head-on. He meets up with a couple of old friends, but most importantly he confronts Debi (Driver), the girl he stood-up on Prom night who he's never been able to forget.

One of the many highlights of this movie is its script. It's filled with snappy dialogue and is very quotable. My personal favorite quote is the one Martin makes when he realizes that his childhood home was sold and turned into a convenience store. "You can never go home again, but I guess you can shop there." There are many other great lines however, many of them delivered at a rapid-fire pace. The script also develops Martin's character more than you might expect from a comedy.

To me this is Cusack's greatest role. He plays Martin to perfection. His mannerisms, his nervous ticks (especially when his back is to a door) and his dry delivery of some funny and dark lines is brilliant. I've yet to see him top this performance.

The supporting cast is also brilliant. Minnie Driver does a good job as Martin's long lost love, Debi the DJ. She does a great American accent and manages to project a lot into her supporting part. I can believe that Martin would obsess about her for the past 10 years. And seriously, is any movie not better with Alan Arkin in it? Here he has a small but funny part as Martin's psychiatrist. Dan Aykroyd plays Grocer, Martin's rival hitman who wants to unionize all assassins to drive prices upward, with his usual comic timing. To my mind though, it is John's sister Joan Cusack who shines the brightest amongst the supporting cast. She plays Martin's secretary and she steals every scene in which she appears. They should make more movies together as they play off each other very well.

Since the reunion Martin attends is for the class of 1986, you can be sure that the soundtrack features some great 1980s tunes. Although mostly the songs are slightly alternative rather than the greatest hits of the 80s, you're bound to know at least a few of them. For me, the music adds to the nostalgia, since I was the class of 1987.

There's been a rumor of a sequel almost since the day it was released, but so far nothing has ever come of it. The ending certainly leaves room for one. I for one would be happy to revisit these characters.

Although it probably isn't for everyone, anyone who likes their comedy a little dark will certainly find plenty to enjoy with this one.

John Cusack is perfect as world weary hitman Martin Blank. I agree that this is his best performance to date (along with Say Anything and Midnight in the Garden of Good and Evil). He has plenty of chemistry with the entire supporting cast, all of whom add to the dark sense of fun.

Today this movie provides a double dose of nostalgia, for both the 1980s and 1990s. I was the Class of 85 and being from Michigan only added to the resonance for me. I was able to feel sentimental about my high school days and at the same time look back fondly on those innocent pre-millennial days at the dawn of the internet and cell phone era.

The soundtrack kicks ass, especially “Blister in the Sun” by Violent Femmes and Nena’s “99 Luftballons” which gets played during a brutal fight scene in the high school hallway.

As Scott wrote the dialogue is great. It is smart and funny. Here are a few of my favorite lines.

Martin: (on the phone with his shrink deciding if he should attend his class reunion) “They all have husbands and wives and children and houses and dogs, and, you know, they've all made themselves a part of something and they can talk about what they do. What am I gonna say? “I killed the president of Paraguay with a fork. How've you been?””

And later after Debi walks in on him shooting a man on the floor of her father’s kitchen three times at point blank range and then bashing him in the head with a frying pan, he looks at her and says in a voice dripping with sincerity, “Debi, I'm in love with you! And I know we can make this relationship work.”

John Cusack not only stars, but is given screenplay and co-producer credit. Joan is good as his assistant, but there are other Cusack siblings featured as well. Sister Ann is at the class reunion with the baby. Brother Bill plays a waiter.

John clearly put a lot into this movie. His dry humor is his shtick and he delivers some lines so sincerely, it is often hard to tell what is a joke. "A thousand innocent people get killed every day! But a millionaire's pet gets detonated, and you're marked for life." "No, no. Psychopaths kill for no reason. I kill for money. It's a job. That didn't come out right."

The humor of Gross Pointe Blank is not my favorite type. The jokes are far too subtle. Old class mate, Bob, wanting to fight Martin one minute, reading him a sappy poem the next, and then asking him to do cocaine with him is slightly funny and also sad. I recognized the movie's jokes as such but I never laughed once. I see how someone could enjoy this movie if the humor is their cup of tea, but it is not mine.