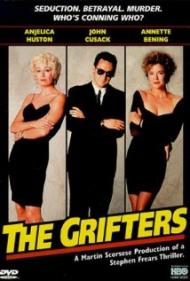 Anjelica Huston in The Grifters.

The Grifters (taken from the pulp novel of the same name by Jim Thompson) is a distaff take on neo-noir that has been described as pulp fiction meets Greek tragedy. It was produced by Martin Scorsese and directed by Stephen Frears. At the 1990 Academy Awards it received four nominations. Stephen Frears was nominated for director, Anjelica Huston for lead actress, Annette Bening for supporting actress and Donald E. Westlake for adapted screenplay. It lost them all and was a box office disappointment as well. Seen today it remains a solid film with great performances from its two female stars.

The movie opens with a voice-over spoken by Martin Scorsese, he says, “Around the country the bookies pay off winners at track odds. It's dangerous when a long shot comes in. Unless you have somebody at the tracks to lower those odds.” That's where Lilly Dillon (Huston) comes in. She works for the mob placing large cash bets on long shots in order to lower the odds. Above all else, Lilly is a survivor. Huston got the part after such luminaries as Cher, Geena Davis, Lily Tomlin and Sissy Spacek were considered for it. Spacek even went so far as to audition but this is quite simply Anjelica Huston's finest screen hour.

Lilly swings by Los Angeles to visit her son Roy (Cusack) where she learns he is also on the grift. She saves his life when he is nearly killed after one of his scams goes bad. Theirs isn't your typical mother/son relationship but it is at the heart of the story. The climactic confrontation between them is grueling to watch. Afterwards there is a shot of Lilly, dressed in red, riding an elevator down from her son's apartment, symbolizing her descent into Hell (see photo). In another scene the director emulates Hitchcock's Psycho when Lilly arrives at a remote Arizona motel.

Annette Bening plays Myra, the third important character in the movie. She is also a grifter. Myra uses her body as well as her mind to get what she wants. She becomes Roy's lover and Lilly's competition. Bening based her performance on iconic noir actress Gloria Grahame, particularly in The Big Heat. My favorite line of hers is her response when Roy tells her he likes where he is and isn't sure if he wants to team up with her. Myra: “I had ten good years with Cole, and I want them back! I gotta have a partner! I looked and I looked and believe me, brother, I kissed a lot of fucking frogs, and you're my prince!”

John Cusack, of whom I'm normally a fan, seems out of his league a bit here. His performance lacks the depth of his costars but perhaps that is the way Roy is written as a somewhat weak, malleable person. A goldfish swimming in a tank full of sharks.

The Grifters is not exactly an uplifting movie but it is an unsparing look at the predatory world of con-men and people on the take. You may not like these vile characters but they are riveting to watch, especially the sight of Anjelica Huston and Annette Bening going toe to toe. John Cusack never stood a chance.