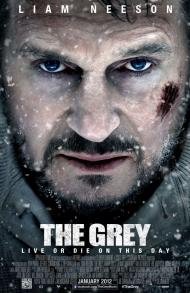 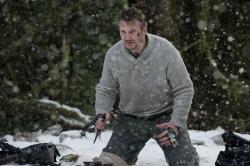 Liam Neeson in The Grey

The last time Liam Neeson saw a January release he was rewarded with a sleeper hit.  The Grey however, is no Taken.  Audiences cheered as a father seeking his kidnapped daughter, got revenge on those who did it.  There is no such reward to be found here.

Neeson plays a security guard named Ottway at some petroleum factory in Alaska.  His job is to shoot Wolves who get too close or attack men at work.  On a flight south the plane crashes in the middle of some wolf packed frigid wilderness.  The seven survivors get almost immediately attacked by wolves and continue to as the ever shrinking group decides to walk south.

Along the way, the men share boring little pieces of their lives.  One guy's little girl wakes him up by tickling him in the face with her long hair.  Another guy states that his last lay was with a 50 year old fat prostitute, and hopes that will not be his last fuck.  Ottway's personal exposition is reciting a poem that his dad wrote, "Once more into the fray/ Into the last good fight I'll ever know/ To live and die on this day/To live and die on this day."  It is also the last words spoken in the film.

There are pointless flashbacks of Ottway and his wife, and others with Ottway and his dad.  This pretentious director did not need them, but he wrongly felt otherwise.  He tries to make comparisons between the wolves and the men.  At one point the men listen as the wolves are making a ruckus.  Ottway explains that the alpha wolf is putting down another wolf that challenged him.  Somehow he just knows what that sounds like.  A few moments later one of the men challenges Ottway's authority.  Real subtle, and pointless.

There are some decent scenes of the wolves stalking, attacking, killing and eating the men.  They do present a real threat that keeps a fair amount of tension in the air.  However, other than once early on, no one ever thinks to sharpen some sticks as spears or carry some piece of metal from the wreckage to use as a weapon.

One of the film's best moments is when the men have to get down the side of a cliff.  By tying all of their extra clothes together they have enough to tie to a tree and around one guy's waist so he can run, jump off the cliff, catch onto a tall pine tree and then tie it to the tree for the others to use to crawl across.  They should have not gone to all the trouble, as the wolves are waiting for them at the bottom of the tree anyway.  Apparently, there was an easier way down and the wolves knew just where to go to meet back up with them.

The film's worst offense is the ending.  I won't give you details, but it is not worth the journey.  I should have seen Man on a Ledge instead. 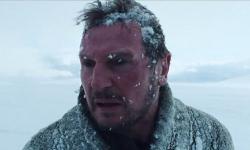 Laim Neeson freezes his career credibility off in The Grey.

This movie should have been Jaws with wolves. In an attempt to be that it has a pack of grey wolves behave in a completely unrealistic, and frankly unbelievable manner. I could forgive that though if it still managed to be entertaining, but it doesn't.

The story should have begun on the plane. Neeson's voiceovers, while done commendably in that deep Neeson voice of his, aren't needed and are far too melodramatic. I'm not sure why they kept the fate of his wife a mystery, but that isn't needed either. They could either have excluded her or been up front about her. I actually wish they had changed her storyline completely. A husband battling to get home to the woman he loves is a story I could get behind. In any case, the story needed to be tighter and more action packed.

There is good characterization, which is helpful so that when the survivors start to die they are more than just numbers, but too much time is spent sitting around campfires yakking instead of battling wolves.

Eric, you mention that the wolves knew a faster way down from that escarpment, but there's a bigger plot hole than that. At one point they spot a tree that has been logged. Well, loggers don't jump from helicopters into the middle of the wilderness. They also don't just log one tree in the middle of the forest. If there had been loggers, there would have been a road. There also would have been a lot more trees knocked down.

The ending is bad and it's badly written. When Ottway begins reciting his father's poem at the film's climax I actually laughed out loud. I could take the ending being what is if it had been better written, but it's so melodramatic.

There are some pretty good action scenes and the plane crash is well filmed. The movie was filmed on location in Northern Canada and it shows, especially near the beginning on the frozen tundra. It's enough to make you cold just watching it.

I expect movies to be bad this time of year and I had even lower expectations this time because I was forewarned by Eric's review. Somehow though, I still ended up disappointed.

Liam Neeson with a disaster on his hands in The Grey.

Since they obviously weren’t going for realism in the behavior of the wolves this movie needed a more satisfying conclusion. Part of the fun in watching disaster movies is in guessing early on which characters will live and which will die. As well as imagining ourselves in the dire situation on the screen and wondering just how we would react in such a crisis. The Grey starts off promising enough but loses its way as surely as these men do stumbling around in this rugged and unforgiving terrain.

I agree with Scott about the characterization. I felt I got to know these men and genuinely cared about their fates. Eric, I didn’t find the scene around the campfire where the men shared stories of their lives to be boring, and the flashbacks are mercifully brief. They even manage to inject a bit of humor into the grim storyline, like when the men are eating the tough wolf meat and one of them quips, “I’m more of a cat person myself.”

The location cinematography is breathtaking. The snow covered landscape with the towering mountains in the distance really gives you a sense of just how isolated these men are. This wilderness is as beautiful as it is deadly.

Liam Neeson is that rarity in Hollywood. He’s a believable action hero and also a damn fine actor. He gives his all to a script that just doesn’t work. A nearly unrecognizable Dermot Mulroney is the only other famous actor in the cast. All of whom acquit themselves well.

The Grey had all the makings of a great action flick. Unfortunately the director made a mess of things trying to have it both ways; by trying to appeal to both mainstream audiences (with the over-the-top savagery of the CGI wolves) and the art-house crowd (with the somber but more likely outcome). The end result is a movie that’s a disappointment for everyone.