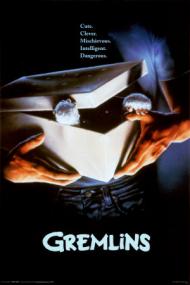 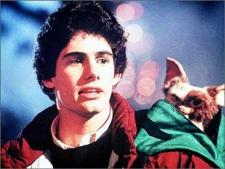 Gremlins opens with "Steven Spielberg Presents." Although he is only in the credits as one of several executive producers, it feels very much like a Spielberg film. Along with Back to the Future and Goonies, Spielberg attached himself to many 80's classics, that he did not actually direct. The one thing they all have in common is that they are fun, entertaining, and for the most part, family films. I hate to sound old, especially about movies from the 80's, but they just don't make them like they use to.

Billy is a young man working at a bank in a small town. He is his families sole source of income. His mother is a stay at home mom, while his dad is an unsuccessful inventor. Just before Christmas, his father brings him a present he got from a shop in China town. It is an adorable furry creature called a Magwi. It looks like an Ewok with bat ears. Billy names him Gizmo. His dad tells him that he must bide by three important rules, "Don't get him wet, keep him out of bright light, and never feed him after midnight."

A day does not go by before he gets him wet, which causes him to create several more Magwi. These are not as nice as Gizmo. They trick Billy into feeding them after midnight. This causes them to go into a cocoon and when they come out they are no longer cute, or the least bit friendly.

All hell breaks loose as they take over the town. They kill people and destroy every thing they can. They have a playful attitude, which leads to many funny scenes, such as when they all watch Snow White an the Seven Dwarfs. My favorite part has always been when Billy's mom, who looks anything but dangerous, takes on several of the evil Magwi. She's like Martha Stewart by way of Sigourney Weaver from Aliens. Don't mess with her!

Where as Michael J. Fox and Sean Astin went on to more fame and success, Zach Galligan disappeared after Gremlins 2. He had an innocent face and boyish charm. Billy lives at home and reads comic books. He has a job but takes his dog along. A co-worker likes him but he seems to barely notice her. He is a boy in a mans body. It is that wholesome combination that makes him a perfect adversary for the utterly vile Gremlins.

One thing I always note while watching this movie, is that the town Billy lives in looks awfully familiar. With the park in the center of town it reminds me of the set of Back to the Future. When Billy is walking by the small businesses in town, it looks like George Bailey running through Bedford Falls.

Not every thing works, such as the neighbor complaining about foreign made products or Polly Holliday making like The Wicked Witch of the West, only not as scary. Cates has a great moment when she tells Billy why she does not celebrate Christmas. Although she is very dramatic, her story is so over the top that it is almost funny. This is some what of a dark comedy after all. Check out how helpful the police are when Santa is being killed by some Gremlins. Because of those kind of scenes, Gremlins has not become a Christmas classic, but it is still a fun watch. 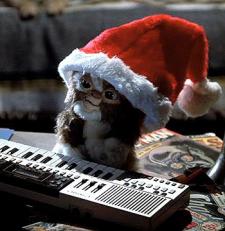 Why not a Christmas classic?

Gremlins is a great homage to several different genres and specific movies. It starts off as a heartwarming holiday movie then morphs into a fast-paced horror movie, although a very lighthearted one. The town is clearly modeled on Bedford Falls. In fact several scenes from It’s a Wonderful Life are shown playing on television. Eric mentioned Snow White but they also use scenes from the original Invasion of the Body Snatchers and To Please a Lady where an aging Clark Gable played a race car driver. This scene inspires Gizmo’s big moment. Polly Holliday’s Ruby Deagle serves double duty as this movies Miss Gulch and its Old Man Potter. I hadn’t seen Gremlins in years and had forgotten many scenes, such as Phoebe Cates’ tragic story that Eric mentioned. I laughed out loud. Sure it’s a bit irreverent but maybe it’s time Gremlins became a Christmas classic.

Put a Gizmo in your stocking this Christmas.

There is definitely an old time flavor to this movie. Apart from the scene of the break-dancing gremlin there's really not that much in it that marks it as being set in the 1980s. The opening scene with the dad in Chinatown almost appears to be from the 1940s. This gives the story a bit of a timeless flavor that has helped it age well.

One movie that is referenced that neither of you mentioned was Arsenic and Old Lace, which the swords falling down every time the front door was opened and closed and the family nonchalantly puts them back up again. There is certainly a Capraesque feel to the setting that makes the humor seem even funnier.

Something that always made me laugh about this movie is just how irresponsible the main characters are. I mean they have just three rules to follow and it takes like what? Three days for them to break all three of them? And as for those rules, just what does “Don't feed them after midnight.” mean anyway? When does it stop being after midnight? And is it after midnight local time? What if you were on the border of a time-zone, are you saying that if you fed them on the one-side they would become evil, but if you stepped three feet to the left they wouldn't? I always felt that was the weakest of the rules.

While it hasn't become a Christmas classic Gremlins did leave a legacy behind. It and Indiana Jones and the Temple of Doom are the two movies released in 1984 that prompted the invention of the PG-13 Rating. The scene from this movie that prompted that rating is the hilarious, but violent scene you mentioned Eric of the mom killing gremlins in the kitchen. It would be a shame though if that were the only thing it was remembered for, because it really is a darkly comic little gem.