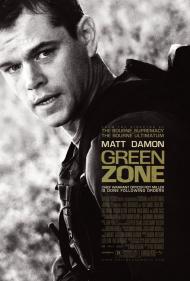 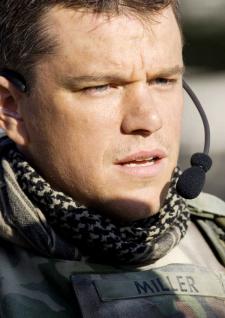 Miller just happens to be in the right place, at the right time, to get his question answered.

The uniqueness of The Hurt Locker's a-political approach was very refreshing for a movie about the war in Iraq. Green Zone on the other hand, beats its political opinion into your head over and over again until you feel like an Abu Grab prisoner, tired of being laughed at by that ugly army chick. Green Zone opens with Damon leading some soldiers into an abandoned toilet factory that they were told was a location for WMDs. It ends with Damon telling a reporter why none were ever found. In between is a conspiracy about America going to war under false pretense.

Spoiler Alert: After asking just a few obvious questions, Damon learns that an America official, Kinnear, knew there was no WMD's, but lead the American people to believe their were, to justify the invasion. A key Iraqi witness to this fact becomes the object of both men's attention. The last half of the film is an action packed, tense man hunt through Baghdad.

Democrats say it was a war for oil. If it was about oil, why do we not have more of it? Republicans say it was because Saddam tortured, and killed his own people. If that was true, why have we not gone into those African countries that have experienced genocide?

The United States did have reason to go into Iraq because Iraq did not follow the rules set up by The United Nations, after Iraq retreated from it's invasion of Kuwait. WMD's however, became the talking point of the invasion. Bush is not a great speaker, and that was never more evident than by his lack of communicating why we attacked Iraq. This film even includes his, now infamous, "Mission Accomplished" speech.

An Iraqi citizen helps Damon, acting as a translator. Even after enduring some abuse and humiliation by American soldiers, he still wants to help Damon. His character is around to make one point only, "It is not for you to decide what happens here." He states to Damon at a particularly dramatic moment. He is noble, while all of the Americans, including Damon, are merely calculating.

An American group of guns for hire, think Blackwater, are portrayed as the heavies. The American politicians are all underhanded and naive. The last scene of the film has Damon drive by an oil refinery, just after he yelled at Kinear that it is important to know why we go to war. Real subtle!