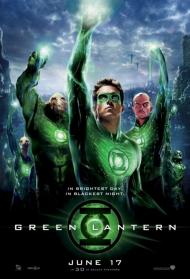 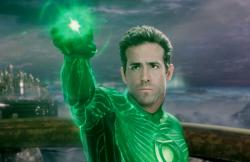 I have been waiting for a Green Lantern movie since I was a kid and first saw Christopher Reeves as Superman.   Although I wanted to see one made long ago, there would have been no way to do it without modern computer graphics.  The look of the film is wondrous, but it it does not over power the movie.

Hal Jordan is a cocky test pilot at Ferris Aviation.  He is in love with the owner's daughter, Carol, whom he grew up with.  Hal's father was a test pilot  at Ferris and Hal is still haunted by his father's passing.

One day a green light encircles him and takes him to the crash site of an alien ship.  Inside is a dying intergalactic lawman, Abin Sur, known as a Green Lantern.  He gives Hal his ring and power battery, making Hal a member of the Green Lantern Corps.   After putting the ring on he is taken to the home planet of the Corps, OA.  There me meets other Green Lanterns, who patrol and protect the universe.  He is trained and encounters Sinestro, his future arch nemesis.

The Green Lantern that Hal replaced had imprisoned a powerful enemy called Parralax.  He escaped and wounded Abin Sur, causing him to flee to Earth where Hal is chosen, and the ring is passed on.  Parralax learns of Hal having Abin Sur's ring and comes a calling.

Ryan Reynolds works his cocky charm with some restraint.  When someone threateningly tells Hal to, "Watch your back." He responds, "You can't actually do that Bob."  He is in amazingly great shape, even if the costume is digitalized on him.  If any superhero did not need to be in good shape it is Green Lantern, as all of his power is actually in his mind and his willpower.

With the ring, Green Lantern can create anything within his imagination.  The scenes where he uses his ring are the films most exciting.  However, the film makers made a couple of rookie mistakes.  In one scene he creates a flame thrower that shoots yellow flame.  Everything he creates with his ring is green, no exceptions.   In another scene he tries to impress Carol by making a green necklace appear around her neck.  Without even using the ring, the necklace just appears on her?  Everything Green Lantern creates comes from the energy of the ring, not thin air.  Both of these errors could be fixed with a little graphic work.

Even though they did not get his powers 100% correct, they did do his oath justice.  "In brightest day, in blackest night / No evil shall escape my sight / Let all who worship evil's might / Beware my power, Green Lantern's light!"  It is spoken twice and will thrill any Green Lantern fan.   The editing is a bit choppy as one minute he is on OA and the next he is back in his apartment.  One nice detail in the writing is his mask.  It only appears when his identity needs hiding, and even then it does not always work.

Green Lantern does not match the epic feel of Superman, or pack the emotional punch of The Dark Knight.  Green Lantern takes the audience into a vastly interesting, yet dangerous universe, in which a lone man has been placed.  Green Lanterns are men of imagination and determination, whose power is limited only by their will power.   Green Lantern, in many ways, is a character that audiences can relate to more than Superman or Batman.

I was never the fan of Green Lantern that you were Eric, so I can't really say I was looking all that forward to this movie. He's certainly not as iconic a character as Superman, Batman, Spiderman or even Wonder Woman, whom he somehow beat to the big screen. I'm not really clear Eric, on why you say an audience could more easily relate to a test pilot who's now a part of an intergalactic police force though. I mean, he's young, good looking, in awesome shape, has a nice apartment, a cool job, a tough car, sleeps with lots of hot women and now he's a superhero. How many of us can honestly relate to that?

Like too many fantasy movies, it is in the writing where this movie is weakest. The backstory is ponderous and overdone. I'm leery of any movie where we have to have a prologue explaining the villain and his motivations.  Hal and his Daddy issues just felt cliched. There's a moment with Hal's brother and his nephew that seems tacked on and out of place. I kept waiting for them to make a return appearance. Eric, you say Reynold's charm is restrained, but that seems more because the writer's don't give him much to work with. The only memorable line in the whole movie is when Carol recognizes Hal because as she says, "What? I'm not supposed to recognize you because I can't see your cheekbones?"

Ironically, from the previews I thought the movie was making a mistake by focusing so much on Green Lantern's off-planet activities when surely it would be his time on Earth that would be more interesting, when actually it is the scenes in space and on OA that are the most interesting and what make the movie stand-out from other super-hero films. The character of Sinestro is one of the most intriguing in the entire movie and it doesn't surprise me that you say he will become Hal's nemesis. The name alone is a bit of a giveaway.

Maybe he's an important character from the comic books, but Peter Sarsgaard's Hector seemed unneeded. Parralax was more than enough of a villain that we didn't need a second one. I would rather have seen more of Hal's training and having fun with his power.

I don't mean to sound too harsh about Green Lantern, because I did enjoy it, but I never really made an emotional connection with it. It's definitely a summer type blockbuster with the emphasis on action and special effects.

So far on the 2011 summer superhero movie scale, I'd place this one below X-Men: First Class, but well above Thor. 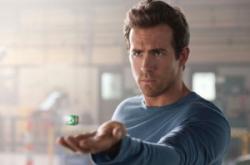 Apart from the nostalgia factor of seeing a costumed superhero from the pages of my childhood comic books brought to life on the big screen, Green Lantern left me bored. It is a completely by-the-numbers big budget superhero flick that brings absolutely nothing new to the genre.

Ryan Reynolds does exude charisma and physically looks great in the part, but the script is another retread of the same old song and dance. With the exception of the tragically talented musical star biopic, the superhero genre has got to be the most tired format in modern movies. They all follow the same old formula, just change the costume and super power and the name of the villain.

Scott I disagree that the scenes in space make this movie stand out from other superhero movies. Silver Surfer had many scenes in space (and Parallax is similar to Galactus) as did this year’s Thor (even if it was a parallel dimension it looked like outer-space).

Green Lantern needed more action. It is slowly paced and has too many uninteresting moments between Hal and Carol. The scene with them slow-dancing at a bar while making unimportant small talk should have been cut entirely.

After seeing this movie I’m not sure if Green Lantern is an important or interesting enough character to carry a movie franchise. He has a cool looking costume but the ring’s powers don’t translate well to the big screen. The scene where he saves the helicopter by creating a race track in mid-air is just plain silly looking.

Perhaps DC should follow Marvel’s lead and make a Justice League movie where they can combine many caped crusaders in one film. Or at the very least if they do make a sequel to this one they need to hire better writers.