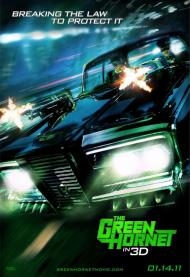 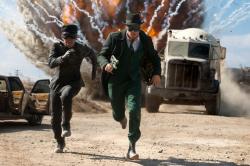 Kato and the Green Hornet.

If you want to help ensure that you will enjoy a movie, first listen to others give you disparaging reviews.   After reading a horrible review of The Green Hornet in my local paper, and having a co-worker simply state that it sucks, my anticipation in seeing it evaporated.  With my two teenage sons in tow, we saw it anyway.

Seth Rogen plays Britt,  the son of a very wealthy newspaper owner.  He parties all the time on dad's money, while avoiding any and all responsibility.  Britt and his dad have some issues going back to his youth.  Considering Brit lives high off the hog at daddy's expense, I fail to see what he is bitching about.

Anyway, dad dies, Britt takes over and has no clue how to do anything.  He meets Kato, a house servant whom Britt has never bothered to introduce himself to.  They form a friendship and become vigilantes.  Britt's idea is that they make everyone think they are the bad guy's as they can better flush the other criminals out that way.

Kato designs the car gadgets and the weapons.  He knows martial arts and does all of the fighting.  The only thing Britt does is come up with the idea and finance everything with the money he inherited.   Diaz shows up as Britt's new secretary.  Diaz is as charming as ever, but the role requires little more than smiling on queue.

Waltz, who was so good as the Nazi in Inglorious Bastards, struggles to find the right tone here.  He is the heavy, but I never knew when to take him seriously.  He seemed to be going for laughs sometimes but he was never actually funny.   His best moment comes early on when he goes face to face with a new crime lord played by Franco.  The rest of the movie has Waltz referring to that conversation.

The best parts are between Britt and Kato.  They are opposites but learn to get along.  They spar at one point in a scene that is reminiscent of Peter Sellers and his man servant in The Pink Panther.  The best joke involves the gas gun Kato makes for Britt. The action scenes are plentiful and long.  The cars play a huge role in them all.   Look for a nod to the original Kato, Bruce Lee, in Kato's sketch pad.

Rogen wrote the screenplay and seems to be adlibbing in many scenes.  Far too often he does not seem to know when to shut up.  Although he wrote this character to suit his strengths, Rogen is not leading man material.   Britt is such an ungrateful, lazy bum that I never liked him to start with.  So his childhood was not all rosy, boo hoo.  The truth is, he went from having daddy take care of him to having Kato take care of him.   His heart may eventually be in the right place, but he really serves very little purpose to anyone.

The Green Hornet is entertaining enough, but Britt should have been approached from a different perspective.  Either make him the hero and hire a real action star, or keep Rogen and make it more over-the-top.  This version tries to do both, and only partially satisfies. 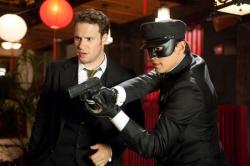 Seth Rogen and Jay Chou in The Green Hornet.

My expectations were even lower than yours Eric.  Despite your mildly lukewarm review, I was still convinced by everything that I'd read and every preview I'd seen that this movie was going to be bad. I suppose those lowered expectations might have helped me enjoy this movie a bit more than I would have if I'd gone in with no previous knowledge, but not by much. It was pretty much everything I thought it would be.

Like you Eric, I thought the movie's biggest problem was its uneven tone. Is it a comedy or is it an action movie? It wants to be both, but doesn't fully succeed at either. Granted, action comedy is a difficult genre to pull off anyway, but this script gets most of it wrong from the start.

Not only is Rogen's script to blame, but his acting is sub-par as well. He's completely miscast and doesn't make a convincing action star or romantic lead. He's able to do comedy and that's about it, which is probably why he tried to include so much of it in the script.

The supporting cast doesn't fare much better, despite being more talented than Rogen.

Diaz seems included purely to have a female character. She shares no real chemistry with Britt or Kato and you could lift her character from the film with just a minor adjustment. Waltz, who was so sinister and threatening in Inglorious Basterds, flounders in this part. He's not threatening or funny and his Bloodnofsky persona is just stupid. How he ever became such a powerful crime lord is never really explained.

Only Chou as Kato comes across well. He's the real hero of the movie and Britt would be lost without him.

The action scenes are long, particularly the final one which goes on far too long and is far too over-the-top. It does keep the story ticking along and the pacing is fast enough. Certainly the 3-D does nothing to help it and this movie could just as easily be enjoyed without it.

Under the right circumstances this story could have been a good one. It just needed a different script and a different leading man. 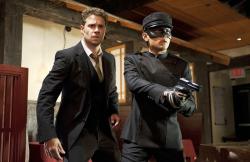 Seth Rogen and Jay Chous as Britt Reid and Cato.

What charm this movie possesses lies in the fact that while Britt (aka The Green Hornet) thinks he is the hero and Cato the sidekick it is actually the other way around. Just as they use the pretense of being criminals for access to the real bad guys, Cato uses the guise of chauffer to hide the fact that he is the real superhero of the duo.

He seems to actually possess superpowers in the form of superhuman speed and agility and there seems to be nothing he can’t build. As Eric mentioned Britt is merely the money man. Oh and he thought of the ejector seats.

I agree that Rogen is miscast although he does share a certain comic chemistry with Chou. They definitely have more chemistry with each other than either man shares with the wasted Diaz. I also agree about the lackluster performance of Christoph Waltz. Even when acting completely ruthlessly he is never menacing. James Franco, in his one scene, makes a more memorable villain than Waltz does in the entire movie.

This is the first 3D movie I have seen in a theater since the 1970’s. The technology hasn’t really improved much, although the glasses have gotten cooler looking. As Scott said it adds little to the enjoyment of the movie and about halfway through I was beginning to be annoyed by having to wear them.

For all its flaws I was entertained by The Green Hornet. It is fast paced, mindless eye-candy, the type movie you would expect to see being released in the summer rather than one dumped in the celluloid wasteland of January. Maybe they were afraid of the summer competition. At any rate this Hornet wields an innocuous and fairly forgettable sting.