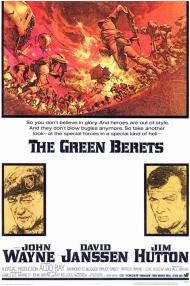 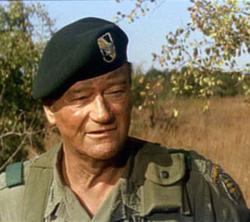 John Wayne in The Green Berets.

The Green Berets was co-directed by and starred John Wayne at the apex of his macho American hero mode. In it he plays a Colonel who is bigger, braver, stronger and wiser than anyone else in the movie. This was clearly a vanity project with which he hoped to boost the American public's morale in regards to the unpopular war in Vietnam.

The plot is pretty simple. Col. Mike Kirby (Wayne) picks two teams of Green Berets for two different missions in Vietnam. The first mission is to help fortify an army base that is being attacked by the enemy. After the Colonel arrives he tells them things like, "Increase your guard and cut back the jungle another 300 feet." You know, things that no one else would have thought of without his help.

The second mission is to capture a North Vietnamese General. This section of the movie is more action packed than the first, although the first mission does feature some fairly well-filmed battle scenes. Some of the stealth fighting in the jungle presages the Rambo movies of the 80's. Wayne pulls off all the physical stuff easily enough, but in real life I doubt any officers his age (he was 60 at the time) were on the front lines.

The only part of the movie that I remembered from seeing it as a child is the part that deals with the young Vietnamese boy and his dog. The boy idolizes one of the soldiers, played by Jim Hutton, and during one of the night battles the boy's dog runs off. The boy finds his dog's dead body later. It is the best moment of the movie, clichéd or not, it tugs at the heartstrings.

Overall, though, this movie is pretty bad. For one thing it is painfully obvious that they didn't even bother to leave the United States to film it. According to the IMDB it was filmed at Fort Benning, Georgia. Since when does the sun set in the East as it does at the end of this movie!? Another problem is that most of the soldiers seem too old for their parts and they act and talk more like it's the 1940's than the 1960's.

This one is for hard core fans of the Duke only.