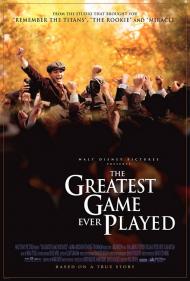 In the genres of movies, none are more predictable than the sports film. They are even less surprising than romantic comedies. At least with a love story the couple may have different personalities. With a sports movie it is always the same; a long shot struggles and overcomes obstacles to win.

In The Greatest Game Ever Played, Francis is a middles class kid near the turn of the century, whose home is across the street from a golf course. He grows up with the sport always right in front of him. He caddies and becomes a star player on his highschool team. However, due to his social standing he is not allowed to play on the elite course. His father preaches hard work and wants him to stop dreaming of golf and get a real job. Everything seems to be against poor Francis, except for his ever encouraging Mom.

For a couple a vague reasons, such as they want a local person playing in The Open, he is eventually asked to participate. As a amateur, he can play but not win any money. He is anxious because his childhood hero, Harry Vardon, will also be playing. He gets a 10 year old caddie who skips school to offer such advice to Francis as, “Read it, roll it, hole it.”

Based on a true story, this movie has little going for it other than the worn out underdog angle. In an attempt to add some tension, the character of Vardon gets a large amount of screen time and we learn that he had humble beginnings as well. He is a British champion but still not a member of the upper crust of stuffy British society. We also have to sit through some pissing and moaning from an American golfer who does not want the British to win.

Golf is a predictable sport in that either the ball goes in the hole or misses. In an attempt to add some excitement, many golf scenes are enhanced by special effects. The camera follows the ball through the air and lands on the green. It is not enough.

What determines if a sports movie is good is whether we find ourselves rooting for the underdog. We know Francis will win, so what are we waiting around to watch? He has little personality, so we never find ourselves caught up in his “struggles.” The Greatest Game Ever Played is by far not the greatest sports movie ever made.