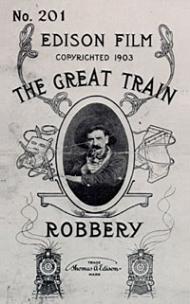 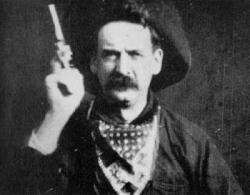 On December 1st, 1903 the first true American movie was released. Appropriately enough it was a western. Made for only 150 dollars and running just over ten minutes in length The Great Train Robbery made cinematic history by being the first American movie to have a narrative and be shot on location. For the preceding nine years movies had been used as literal moving photographs. They simply captured a moment in time, such as a kiss, or factory workers leaving work, or a woman feeding chickens. In 1902 with the release of the French made A Trip to the Moon the art form known as The Movies was truly begun and the very next year America got in on the act with Train Robbery.

The plot is simple and the film quality grainy with age, but this movie still has the power to entertain. Four gunmen rob a train station clerk and tie him up before boarding the train. They cause the train to stop and order all of the passengers off. They proceed to rob the passengers and shoot one man as he tries to escape. A little girl dressed like little red riding hood discovers the clerk and he tells the sheriff who rides out with his posse in pursuit. This leads to the final shoot-out in the woods before the final famous shot of one of the bandits pointing his pistol at the camera and firing.

This movie was amazingly advanced for 1903. Not only was it shot on location in New Jersey, but it features a cast of dozens of extras and includes exciting shots of the train robbers running along the top of the train and an exuberant horse chase through the wild countryside. The final shot is one of the most famous in all of silent films.

So as of this past month the American movie has officially reached the century mark. How truly amazing that we still have this cherished bit of history to view whenever we wish. If you have never seen The Great Train Robbery then you are in for a rare treat. 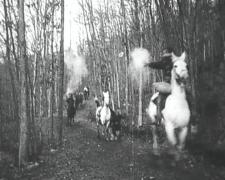 It is just so difficult to be harsh on a movie when it's one of the first ever made.

I feel compelled to give this movie 4 stars simply because of its historical significance, but overall it is a weaker film than 1902's A Trip to the Moon. It's just so difficult to be harsh on a movie when it's one of the first ever made.

There are a few parts of this movie that made me laugh where laughter wasn't intended. Whenever anyone is shot in this movie they die in the most exaggerated manner, usually by throwing their arms up in the air and then spinning down to the ground. A later scene shows one of the robbers beating up the train conductor and then throwing him off the train. Only it's so obvious that it's just a dummy he throws that I laughed. No attempt is made to act as if it's heavy or a real human. Among its other firsts, this movie can include the first cases of over acting.

Like A Trip to the Moon, I was struck again by how the camera never moves and the absence of close-ups. It really makes you appreciate how much a close-up can bring to a movie. Also like the earlier French film, while it has a narrative, it still lacks characterization. You don't know anything about the bandits or the people being robbed.

Clearly this is a landmark film and one that any serious student of film history should watch, but by today's standards it's more of a curiosity than a real source of entertainment. 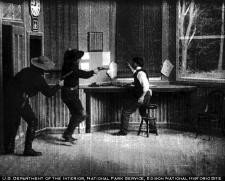 Before there was color, sound, close ups and decent set construction.

Besides what my brothers have already written, two things stood out for me in this film. The first is the door on the set of the train station. It never stays closed. Whether it's the little girl or the bandits, no one seems to get the door to cooperate.

The other thing was the scene where the thieves are in the woods sorting their loot and in the background you can see the posse approaching through the trees. Sure close ups are needed in films to help express character's emotions, but sometimes a wide shot, where the audience can choose what to watch works better. In this case, we know what is about to happen before the criminals and it builds a sense of anticipation.

The Great Train Robbery is to modern film what the wagon was to the automobile. This movie showed just what the movie camera could do and helped start an industry that changed the way the entire population of the Earth communicated, thought and felt. Historically, this is the most important American film ever made. 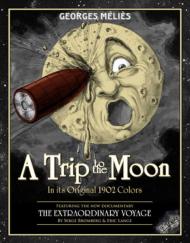