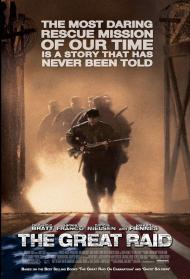 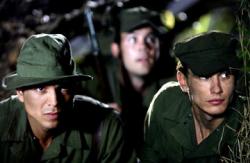 Benjamin Bratt and James Franco in The Great Raid.

I am first and foremost a sucker for a war movie. They usually have good guys and bad with cut and dry goals. When the movie is based on true events it can really pull me in. This is the case with The Great Raid.

With the exception of a minor romantic subplot thrown in, The Great Raid is based on true events and real people. 500 American prisoners of war are being held in a Japanese camp in the Philippines. A group of untested Army Rangers are sent to rescue them. Meanwhile a non asian woman, Margaret, helps steal medicine and smuggle it into the prisoners. The movie bounces from each of the three stories until the climactic raid occurs.

James Franco demonstrates quite well that he has the screen presence to star in a movie. He and Bratt play actual officers who planned and executed the rescue. Joseph Fiennes is a malaria stricken POW who is in love with Margaret, whom he once knew. Connie Nelson has the most dramatic scene in the movie. After being let out of prison she is forced to walk past the recently murdered bodies of her fellow smugglers.

The Great Raid is old school in that it avoids political pontificating. Of course it was made a couple of years ago and has been sitting on Miramax's shelves waiting for release. It also is about a war when we had a Democrat President who attacked a country, Germany, who had never actually attacked us. (Sound familiar?) Just because the movie never gets up on a soap box doesn't mean I can't.

The Great Raid is truly in the mold of The Longest Day, only with an all B-list cast. Instead of saying ,"Hey that's Robert Mitchum" you say, "Hey that's Mark Consuelos from All MY Children."