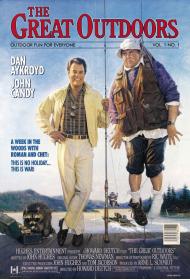 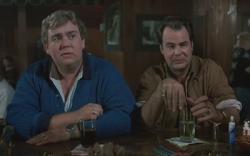 John Candy and Dan Aykroyd in The Great Outdoors.

The Great Outdoors was the 15th theatrical feature written by the prolific John Hughes. By the time of his death at age 59 in 2009, that number had risen to 33. Like much of his work, The Great Outdoors is a comedy with heart about a suburban family from Chicago. It features an inspired cast led by John Candy and Dan Aykroyd, with Annette Bening making her motion picture debut, and Bart the Bear giving an inspired comedic performance as the Bald-Headed Bear.

The Ripley family heads to the woods in Wisconsin for summer vacation. The father Chet (Candy), his wife Connie (Stephanie Faracy), and their two sons Buck and Benny (Chris Young and Ian Giatti, respectively). For nostalgia's sake they choose to stay in the same cabin where Chet and Connie honeymooned, and the entire family is set for a fun filled, relaxing time when trouble arrives in the form of Connie's yuppie sister's family.

For once John Candy doesn't play the annoying character. That part goes to Dan Aykroyd as Roman Craig. He's a pushy investment banker (check out his gigantic primitive cell phone) with a snob wife (Bening), and creepy twin daughters (Hillary and Rebecca Gordon) with long red hair. What began as a great time in the outdoors quickly becomes a trial by fire for Chet and his family. But in the end you just know that everything will work out because this is a feel-good John Hughes family comedy. Other than some occasional vulgarities, The Great Outdoors remains completely wholesome.

The comedy hijinks include a visit to meet the oldest man in Canada (he turns out to be dead), a slapstick water-skiing bit where Candy gets pulled around the lake while holding on for dear life, “You bastard! You bastard!”, “I think he's saying go faster.” Candy also attempts to eat a 96 ounce steak (I knew I had seen this somewhere before when I watched Barbra Streisand do it in The Guilt Trip), and the movie climaxes with the hilarious sight gag of the Bald-Headed Bear's bare ass.

The humor is harmlessly juvenile. There's a man who's been struck by lightning 66 times. His stutter cracks me up every time. Two raccoons have an ongoing bit where they invade the Ripley's garbage while spouting a running (subtitled) commentary on all the shenanigans. Stick around past the credits for their final joke. One of the best scenes is where Chet and his younger son visit the spot where all the campers go to illegally feed the bears. A bear climbs on the hood of their car, while another bear gets on the roof. Chet drives slowly away with both bears still on the car. Not all the jokes work. The bat in the cabin bit runs too long and isn't all that funny.

In typical Hughes' fashion the script includes plenty of heart. The older Ripley boy meets a local girl and experiences his first taste of romance. It's all very sweet and innocent. The relationship between the four adults evolves over the course of the story as well. The unlikable Roman Craig even turns out to be not such a bad guy after all. At one point he asks his wife, “Why do Chet's kids look at him like he's Zeus and my kids look at me like I'm a rack of lawn tools at Sears?” Near the end of the movie, after the big confrontation scene between the adults, Roman becomes a hero when he rescues his daughters from a dangerous situation.

You always knew what you were going to get with a John Hughes script and The Great Outdoors is certainly no exception. It's a heartfelt family comedy that combines slapstick and situational humor. The cast is terrific and the story has a timeless quality about it (except for that cell phone). Kids today should be able to laugh at it, while it conjures nostalgic memories for anyone old enough to remember the 1980s. 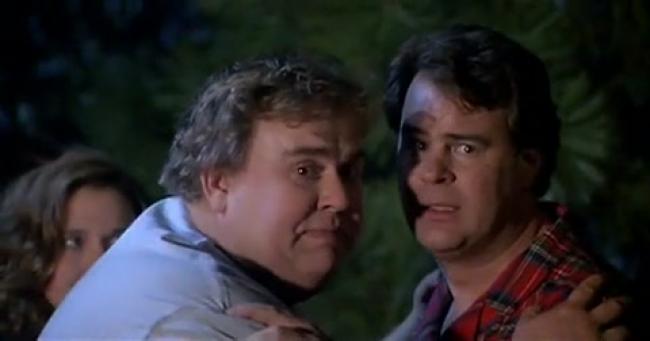 John Candy and Dan Akroyd in The Great Outdoors

Having stayed in Wisconsin for both work and vacation, I was a bit interested to see if The Great Outdoors brought up any memories. Then I learned that the entire movie was filmed in northern California, which begs the question why even state that it takes place in Wisconsin if you are just going to film it elsewhere? Lots of states have woods, lakes and bears. The only connection I found was that the families in the film eat at a restaurant called, "Paul Bunyon's Cupboard." My wife and I ate dinner near the Dells in a place called, "Paul Bunyon's" that resembled the one in the movie. Otherwise, nothing.

As Patrick wrote, The Great Outdoors is a wholesome, family comedy. This movie could not get any more harmless if it tried. Even the "...blow it out your ass." scene never becomes too much as the mother finally tells everyone to stop using the expression. The chaste teenage love story involves only a single kiss goodbye. The one adult joke will not be understood by the youngest in the audience. Kate screams and comes running out of her bedroom, yelling, "It touched me." Her husband Roman follows her out and snorts, "It's been touching you for 12 years, you never freaked!" She goes onto explain that it was a bat.

My favorite scene in the film is when Roman, envious of how close Chet is with his children, decides to tuck his daughters into bed. Chet has just told them all a scary story about a bear and Roman wants to comfort them. In his efforts to assure them he is there as their protector, he ends up telling them an even scarier story. No wonder they are such strange little girls.

Also as Patrick mentioned, there is a bit of heart here as the two families learn to help each other even though they do not always like each other. It just took a bald, bare assed bear to make them all see it. I also liked and related to a side plot about Chet wanting to connect with his oldest son. Unfortunately, that story line never really has anywhere to go.

As polite as this movie is, there is not really enough going on to make this a great film. You will like these characters and chuckle a few times, especially during the climax, but there is nothing here we have not seen in countless sitcoms and other family films. It makes for a pleasant enough rainy afternoon watch but you will likely not come away all that impressed.