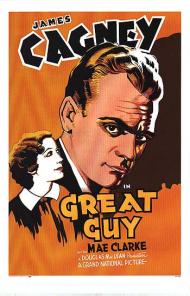 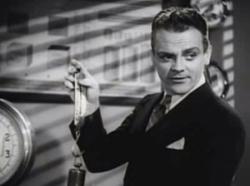 James Cagney making sure everyone measures up in Great Guy

James Cagney became famous playing gangsters. To this day it is what he is most remembered for. He was great in those roles strutting around like a cock sure psycho; you were never sure what he was capable of doing. His charm was unique and it also translated into roles where he played the good guy such as in Great Guy.

Cagney plays Johnny Cave, an officer with the New York Department of Weights and Measures (I never knew there was such a government department). His boss gets sent to the hospital by a crooked city alderman. Cave takes charge and is determined to do the right thing. He marches into butcher shops and deli’s to expose a corrupt system that cheats the public by selling them less product than they are paying for.

Johnny quickly gets on the bad side of an apparent organized system of merchants who are used to bribing and cheating to get others to turn a blind eye. Johnny is soon feeling pressure from mobsters as well as politicians, but hey this is Cagney. It is nothing he cannot handle.

Cagney gets into a couple of scrapes. One near the end is particularly good. Cagney locks the police out in the hall while he kicks someone’s ass. The police know the guy has it coming so they make very little effort to stop him.

My favorite moments were the ones that he shares with Mae Clark. She plays his betrothed. They spend time picking out furniture as he complains about her hats. They have a nice chemistry. He ends up pissing her off when he accuses her boss of wrong doing, but no one gets any fruit shoved in their kisser.

My brother Patrick has seen many more Cagney films than I and no doubt has seen him play such light romantic scenes often, but for me they were fairly new. Other than The Bride Came C.O.D.(1941), I have not had much exposure of Cagney acting in such light fare. He may have been known as a tough guy but he still had charm when simply playing a great guy. 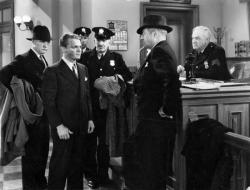 James Cagney gets roughed up and arrested in Great Guy.

Great Guy was James Cagney's first picture under his new contract with Grand National. He had been absent from the screen for the preceding 11 months while battling Warner Brothers for more pay and better scripts. He would return to his former studio -after just two pictures with Grand National- after Warners offered him $150,000 plus 10% of the gross to star in the screen version of the Broadway sensation Boy Meets Girl. Not surprisingly Great Guy has much lower production values than what Mr. Cagney was used to since Grand National was such a small fish in that shark infested swimming pool called Hollywood. Cagney, however, infuses it with his usual enthusiastic energy and cocksure attitude. His total commitment to every second he spent in front of the cameras has never really been equalled.

This is Cagney in good guy mode. He always played a tough guy even when being noble. The main difference being that he gets the girl when on the right side of the law. And speaking of the girl, this was the third and final time Cagney shared the screen with Mae Clarke. And this time she gets off easy. Eric alluded to the grapefruit-in-the-kisser scene from Public Enemy. In their second picture together, Lady Killer, Cagney dragged Clarke across the floor by her hair. Here all she has to endure are a couple of insults about her hat.

Great Guy was based on the popular “Johnny Cave Stories” by James Edward Grant that had been appearing in the Saturday Evening Post. Johnny Cave was an ex-prize fighter, which explains his handiness at fisticuffs. True to form Cagney packs plenty of punches. I'll bet no real inspector for the Department of Weights and Measures ever socked this many crooked shopkeepers. The crimes he faces aren't exactly life threatening. He confronts cheapskate butchers who stuff chickens with lead weights and green grocer chiselers who put false bottoms in strawberry containers.

Director John G. Blystone makes the most of the shoestring budget he was allotted. He keeps things moving at breakneck speed (the entire picture runs just over an hour). As for Cagney, he struts his way through Great Guy with an ever present twinkle in his eye. He almost seems to be winking at the audience as he delivers his rapid-fire wisecracking, punches his way to victory, and in his own inimitable way romances his girl. As a side note, as Eric mentioned, I have seen Cagney play light romantic scenes in quite a few pictures. But my brother is forgetting about The Strawberry Blonde -perhaps Cagney's most romantic picture- where he comically courts Olivia de Havilland in turn of the (20th) century Central Park.

Great Guy also features character actor James Burke playing Cagney's friend Aloysius who spouts a steady stream of tall tales in an Irish accent so thick you could cut it with a knife. All things considered this is but a minor entry in Cagney's extensive film catalog. But like every movie he ever appeared in, it's worth watching just to see him sprinkle goodies along the way. 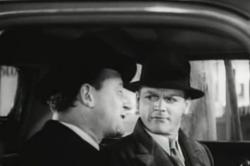 During the heavy-handed studio years of Hollywood, when stars were often locked into long term contracts, Cagney was one of the stars who fought back against the system. He was an early supporter of the Screen Actors Guild and would serve as its president for 2 years starting in 1942. He walked out on Warner Bros. several times when he objected to the terms of his contract, becoming one of the few stars of the period to sue a studio for better terms and win. Jack Warner once called him "The Professional Againster" because of the way he wouldn't simply do as he was told. As Patrick wrote, this film was made during one of his walk-outs from Warners. Ironically, this movie ends up being just more of the same of what he was churning out at his original studio, only with a much lower budget.

Of all the government departments to feature in a movie, the Department of Weights and Measures certainly seems like an odd choice. It doesn't suggest either excitement or romance. Perhaps former NYC Mayor Bloomberg could get excited about it--I can picture him dreaming he's Cagney, punching out movie theater managers who sell soda in too large cups--but not too many other people. Of course when you put a character played by Cagney in charge of any department you know there's going to be at least some excitement and he doesn't disappoint, even if most of the "villains" are just cheating storekeepers, butchers, and gas station attendants, that doesn't stop him from getting into good old-fashioned punch-ups. Of course, considering this was released during the Great Depression, perhaps it had a greater resonance with audiences of the day.

The main plot is pretty standard stuff and the only real enjoyment to be had is watching Cagney. When he isn't punching someone, his scenes with Mae Clarke are the best. There's a running gag involving a furniture store that is quite cute. And like Patrick, I enjoyed James Burke, who provides some mild comic relief as Cagney's dimwitted partner.

This is one of those older films whose rights have fallen into the Public Domain. As such it is available for free online and on several DVDs. A consequence of this is that the quality is fairly poor, although it can vary depending upon your source. It's still watchable, but the soundtrack is pretty rough and full of hisses and pops.

I agree with Patrick, this is a minor entry in the Cagney catalog. He's the best thing in it and without his presence there'd be little reason to watch.