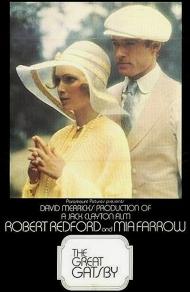 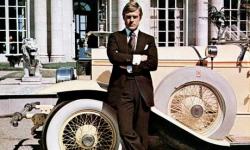 This is the third film version made of F. Scott Fitzgerald's classic American novel.  This version's screenplay was written by Francis Ford Copolla.  It is the most famous adaptation thus far but lacks all the romantic intensity of the book.

In case you are one of the few who have not read the book, the story is narrated and seen mostly through the eyes of Nick Carraway, a Midwesterner living on Long Island in a rented cottage that is neighbored to a mansion owned by the mysterious Jay Gatsby.  Nick soon discovers that his married cousin Daisy, who lives across the bay, and Gatsby have a past and he becomes the middle man in helping to reunite them.  The story of Jay Gatsby is a romantic reflection of the time.  From opulence to tragedy, it is the Jazz age personified.

The 1920s were a golden era for many Americans.  The stock market was making more people rich than ever before in the history of the country.  American movies and jazz music helped usher in and reflect new sets of morals.  The recent invention and common use of both cars and condoms changed the very face of sexual encounters.   The world, for many Americans, had become a place of luxury and self gratification.    As this was before cell phones and the internet, people still gathered for large parties or intimate conversations.

This is the world of Jay Gatsby.  He throws huge parties with endless amounts of alcohol and jazz music.  The famous, from actresses to politicians, show up to mingle among the throngs of happy intoxicated people.  Gatsby cares naught for any of them.  His only concern is that his one true love, Daisy, will one day be among the party attendees.   Gatsby eventually has Nick arrange a meeting between him and Daisy.  They reconnect, but Daisy is married with a daughter.  Can the star-crossed lovers recreate what they once had and overcome who they have grown into?

I have read The Great Gatsby twice in my life but have just now seen this film.  For some reason though, I have always pictured Robert Redford as Gatsby.  In my opinion he really fills the role, at least physically.  Gatsby is a man who has gotten through life largely on his charm and is there a more charming looking man in film than a smiling Robert Redford?

Mia Farrow however, does not fare as well.  She is of average looks, playing what is essentially a trophy.  When young, Daisy had the pick of military officers who vied for her attention.  Now a woman in her late twenties she has millionaire playboys fighting over her.  I never saw in Farrow what all of these men supposedly do.  She plays Daisy as a scatterbrained emotional wreck.  To some degree, that was what Fitzgerald was going for, but for men to see past those flaws she must contain some great level of attractiveness, be it physical or intellectual, but Farrow demonstrates neither.

The real problem with this film is that there is absolutely no connection between the leads.  Redford and Farrow look at each other with all the interest of an actor waiting to get out of costume and punch the clock.  One reason for a lack of chemistry was stated by Farrow in an interview where she blamed Redford for spending all his time between shots in his trailer watching the Watergate Hearings.  Whatever the problem was, there is no tension between them.  Even when Daisy, through frustrated tears, tells Gatsby, "Rich girls don't marry poor boys."  I felt nothing.

At the time of its release, this movie became a bit of a social phenomenon.  Farrow appeared in costume on the cover of Time magazine.  The fashion in the film was much talked and written about.  Redford wears a pink suit.  What was it about men wearing pink in the 1970s?  That was all smoke and mirrors though.  The film follows the book closely enough and the time period is well represented but I was left not really caring if this Daisy and Gatsby ever got together, which is the entire point of the story. 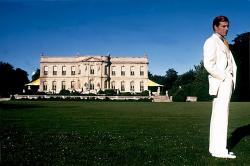 Robert Redford as The Great Gatsby.

No movie can ever truly capture the precise beauty of Fitzgerald's prose. Therefore the only fair way to review any screen interpretation of it is to imagine you've no prior knowledge of the book. The story itself is compelling enough and the characters are intriguing enough to make a great movie. Unfortunately none of the three versions Paramount has produced over the years is a great movie. Maybe next year's remake will do the trick.

I agree with Eric that Robert Redford makes an ideal Jay Gatsby. He is certainly a better choice than either Warner Baxter or Alan Ladd, who played him in the 1926 and 1949 versions respectively. Fitzgerald lived to see only the first movie version of his most famous novel. In the 1930s the author made several attempts to bring his own screenplay adaptation to the big screen.

Gatsby is such an enigmatic and elusively romantic figure. His story is a tragedy of operatic proportions (in fact an opera of The Great Gatsby was composed in 1999 by John Harbison). Everyone sees some of Gatsby in themselves. He's a dreamer and a loner with a single-minded obsession for a lost love. Redford does a great job of conveying Jay Gatsby's intense loneliness while revealing glimpes of the poor, self-educated, mid-western farmer's son he started out as.

I also agree with Eric that Mia Farrow disappoints as Daisy Buchanan. “Don't you always watch for the longest day of the year and then miss it?” She and Redford seriously lack chemistry. Although to be honest this sort of works for the story. Daisy isn't a real person to Jay, she represents a symbol of social success as well as his romantic ideal. If he ever really saw her for the shallow, vapid, and incredibly selfish person she is, he would stop loving her. But his illusions about life are the one thing Jay Gatsby clings to right up to the end.

Sam Waterston makes a good Nick Carraway, the young man that acts as narrator and stand-in for the author. We get to know Gatsby as Nick discovers him and we see him as reflected in Nick's eyes. Karen Black fares well as the ill-fated Myrtle Wilson as does Bruce Dern as Tom Buchanan. It is Mia Farrow alone that seems miscast.

The look of the movie is flawless. The time and place are fabulously recreated. The scenes at Wilson's Garage in Queens, which Fitzgerald described as an ash heap, looks exactly like I have always pictured it while reading the book. The iconic oculist’s billboard is likewise spot on. Although the script fails to take full advantage of the symbolism of the book.

It will be interesting to see Leonardo DiCaprio in the titular role next year. I can't imagine him being a better Jay Gatsby than Robert Redford though. This 1974 Great Gatsby is a decent movie. It tells the story well enough even if it is a tad slow. It's a pretty bauble that never really gets beneath the surface of the story. 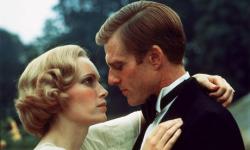 Mia Farrow and Robert Redford in The Great Gatsby.

Fitzgerald described Daisy Buchanan like this, "Her face was sad and lovely with bright things in it, bright eyes and a bright passionate mouth, but there was an excitement in her voice that men who had cared for her found difficult to forget: a singing compulsion, a whispered “Listen,” a promise that she had done gay, exciting things just a while since and that there were gay, exciting things hovering in the next hour.” Mia Farrow never comes close to that description. Like Eric, I didn't find her beautiful, although she wears the clothes well and does have beautiful eyes.

Redford looks the part of Gatsby, but he plays him so low key that his Gatsby is even more of a cipher than he is in the book. Only occasionally does he breathe life into the character and that's when he smiles. Redford has a brilliant smile and it fits Fitzgerald's description perfectly, "It was one of those rare smiles with a quality of eternal reassurance in it, that you may come across four or five times in life. It faced--or seemed to face--the whole external world for an instant, and then concentrated on you with an irresistible prejudice in your favor." Like my brothers I found his lack of chemistry with Farrow to be one of the film's most disappointing aspects.

The hardest part of turning this, one of the very greatest American novels, into a movie is that its power lies more in the way the story is told than in the story itself. If you list just the surface details of the plot all you have is a soap opera. It's the layers of symbolism and Fitzgerald's turn of phrase that turn the melodrama into the highest form of literary art. So how do you translate his words into a moving picture? The most obvious way, and the one that the makers of this version chose, is to cheat and simply include as much of the book's descriptions as you can, either in dialogue or in voiceover. It's not a very good technique. Film is a visual medium. We should be shown and not told. A director who wants to make a successful adaption of this book, needs to find a way to convey Fitzgerald's prose in a visual manner. Something Jack Clayton, a director with only a handful of credits to his name, was unable to accomplish here.

Another major problem with this version is the pacing. Fitzgerald's novel is quite short, running less than 200 pages in most editions. It's a very compact story without an excess chapter or even an unneeded paragraph in all of it. This cinematic version however, is sorely in need of an edit and I don't just mean that there's extra scenes, although there are plenty of those. Along with the horridly dated scenes of Gatsby and Daisy picnicking while supposedly gazing into each other's eyes with longing, almost every other scene could use a good tightening. The pace of every shot is languid and far slower than it needs to be.

I have read The Great Gatsby more times than I can possibly remember. Even now, I still get a certain chill when reading the famous last lines. "Gatsby believed in the green light, the orgiastic future that year by year recedes before us. It eluded us then, but that's no matter--tomorrow we will run faster, stretch out our arms farther.... And one fine morning-- So we beat on, boats against the current, borne back ceaselessly into the past." How can any movie version hope to live up to that quality of writing? Certainly, this version didn't. It's pretty to look at, but lacks the depth and the magic that makes the book such a classic. 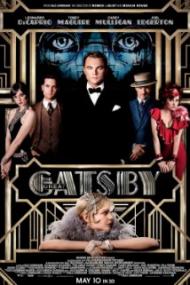