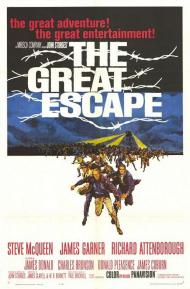 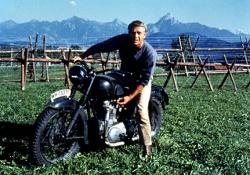 Steve McQueen in The Great Escape.

Rare is the film where everything comes together so perfectly. The Great Escape is such a movie. It has it all; action, adventure, suspense, a great cast and a memorable score by Elmer Berstein that you will find yourself whistling to by the end of the movie.

Filmed entirely on location The Great Escape tells the true story of a massive attempted escape from a Nazi prison camp. Led by the British officers, the prisoners go to great length to dig tunnels, forge documents and tailor clothes to appear as civilians once they are out of the tunnel.

The movie plays in two acts. The first one is almost a documentary. Through the character's interaction we see just how they were able to get the tunnels built and hide the dirt. We see how the scrounger, James Garner, is able to intimidate a guard into giving him a camera. The first half of the movie is information and fun. One characters falls through three flights of bunk beds as someone has just removed the supports to use in a tunnel. The camp parties on distilled liquor. 'Down with the British.' The American pow's joke with their British cohorts.

The final scene of the first act changes the tone of the movie. It begins with the line 'They found Tom.' Tom refers to one of the escape tunnels. One soldier, named Ives, is so depressed by the German guards discovering one of the tunnels, that he makes a mad dash for the fence. He is immediately machine-gunned by a tower guard. This ends the first act and begins the dramatic and exciting second act.

The Americans are the minority in the camp. However, Steve McQueen steals every scene he is in. McQueen was the answer to James Dean. He has all of Dean's quiet cool. He never needs to speak a line or complete some action. Like Dean, McQueen exuded cool just by being there. His motorcycle chase scene and subsequent jump over a fence are the most famous scenes in the movie.

Patrick enlightened part of this movie for me. Years ago he pointed out that the relationship between the characters Danny and Willy had homoerotic overtones. Thanks to Patrick, I pictured them as homosexual the whole movie. They share some quiet, alone moments. They also show some genuine concern for each other. However, other than the romantic music playing when they get into the row boat, there is no suggestion that they are gay.

This cinematic true story is without a doubt, one of my favorite movies. The real men who tried to escape were genuine heroes. They could have just sat out the rest of the war playing cards and chess. Instead they volunteered to risk their lives to distract as many German soldiers as possible and thus disrupt their war effort.

I was always fascinated by World War II when I was in school. Watching this along with The Longest Day on television were the reasons why. A few years ago I ran into an elderly gentleman who was wearing a baseball hat that had World War II Veteran written on it. I asked him if he served, then shook his hand when he answered yes. I just felt compelled to do so. Watch The Great Escape and you might find your self compelled to thank a veteran as well. 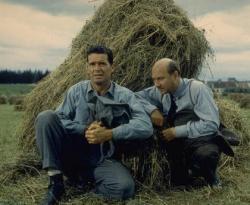 James Garner and Donald Pleasence in The Great Escape.

As a kid I loved this movie. I was curious, therefore, to see if it would live up to my childhood memories when I sat down to watch it for the first time in decades. It did. As Eric mentioned the movie takes place in two long acts. The first one starts off with almost a feeling of levity. The Nazi's have rounded up all of the most persistent POW escapees and brought them to one central camp. As one of the characters remarks, 'There is madness in their method.' Still for a movie about war prisoners it has a lighthearted mood as several of the detainees try to escape immediately upon arrival and are caught by the Nazi guards. During the second act things get much more serious. In fact, of all the men who actually make it out of the camp, fifty are killed, several more are recaptured and only three are shown successfully leaving the country. This adds to the overall feeling of heroism, men willing to die for their country.

As for the characters of Danny and Willy, I like the fact that although the director never says they are lovers, he also never says that they aren't. Since undoubtedly many gay soldiers served silently during WW II, I love the fact that I can picture them as I choose to. In my mind they are a couple.

My favorite part of this beautifully shot movie is the climax after the men have escaped from the tunnel. You will find yourself rooting for them all to succeed and getting mad whenever anyone of them is caught. You may even find yourself getting a bit choked up as the roll call of all the prisoners plays at the end. 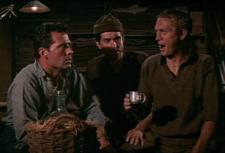 This movie goes down as smooooth today as it did when it was released.

This movie taught me something. It shows clearly that if you're ever trying to escape from a prisoner of war camp, always chose the least conspicuous mode of transportation. Take a bike or a rowboat. Avoid trains where you'll have to constantly show your papers and test your language skills. Don't steal a motorcycle or an airplane. Lay low and don't draw attention to yourself and you just might escape.

Unlike a lot of long movies, this one feels as though it needs to be as long at is to tell the whole story. There's not a lot of wasted screen time. And the story moves quite quickly.

An unusual thing about it is that it has to be one of the few ever produced without a single female speaking part. This is strictly a guy's movie with the only women appearing in crowd scenes when the escapees are in towns or on trains.

Eric, you're completely right about McQueen. He's not only the coolest guy in the movie, he's one of the coolest ever period. I'm not sure exactly what it is, but he just has an aura about him that radiates coolness. The motorcycle escape and chase was suggested by McQueen and is completely fictitious, but as you said Eric, it's one of the most iconic scenes from the movie.

The rest of the cast is also good, but one thing I noticed this time around was that Jame Coburn does the worst Australian accent ever. They obviously wanted to represent as many countries as possible in the escape, they just couldn't be bothered to do the same amongst the actors.

As for the relationship between Danny and Willy, I suppose they could be gay, but it's not indicated either way and their relationship isn't shown being anything more than just friends. You could just as easily say any one of the men were gay. I confess I never even though about it until I read your review Eric. It certainly has no bearing on the story one way or the other.

While the whole movie is great, it is definitely the theme music that sticks with you the longest. My wife for instance, has never seen the movie, and yet when I was humming the music afterwards she was able to hum right along with it. It's the sort of thing you just pick up subliminally, almost as if you're born knowing it.

Not a lot of movies from our childhood hold up to viewings as adults. As you said Patrick, this one definitely does.