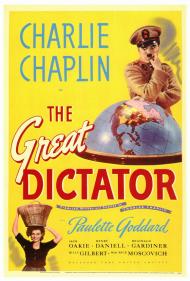 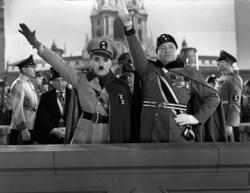 Charles Chaplin and Jack Oakie in The Great Dictator.

Thirteen years after The Jazz Singer ushered in the sound era Charlie Chaplin's first all-talking movie premiered. The Great Dictator satirized Hitler and Nazi Germany with Chaplin playing dual roles. He's an unnamed Jewish barber, who looks suspiciously similar to the Little Tramp, as well as Adenoid Hynkel, dictator of Tomania, who looks intentionally similar to Adolph Hitler, who wore a mustache similar to the most famous silent comic in movie history.

This roundabout of identities reaches its climax during the movie's final scene where Chaplin looks directly into the camera and delivers a heavy-handed speech about freedom and man's inhumanity to man. Here you have Charles Chaplin, in the guise of the Little Tramp, playing a Jewish barber, posing as Adenoid Hynkel, spoofing Adolph Hitler. It's just too bad this final speech turns the movie into a lecture and in so doing stops the comedy dead in its tracks.

It begins during the First World War. Chaplin's unnamed protagonist saves the life of a pilot named Schultz by flying him (upside down) to safety. Although they both survive the crash landing, Chaplin's character develops amnesia. The story then jumps ahead 20 years. Having finally regained his memory this man is released from the hospital and goes to live in a Jewish ghetto where he works as a barber. The story alternates between his life and scenes of the titular dictator as he plans his attack on the neighboring country of Osterlich (think Austria). There is of course a girl (Paulette Goddard) along the way as the story inevitably leads to the two Chaplin characters being mistaken for each other and subsequently switching places.

There are moments of comic brilliance in The Great Dictator. Chaplin speaking a nonsensical German language that ends in coughing sounds while he gesticulates in an exaggerated manner is worthy of a few chuckles. And then there is the gracefully comic balloon ballet where the world is -literally- his plaything. It is easily the most famous scene in the movie and is perhaps the most sublime bit of pantomime ever committed to film. The Jewish barber looks like a slightly older, and a decidedly better dressed, version of the Little Tramp. At 50 this would be the last time Charlie Chaplin would ever don the familiar costume, but when he opens his mouth to speak the illusion is shattered.

Jack Oakie provides laughs as the visiting ruler Benzino Napaloni of Bacteria (an equally broad parody of Benito Mussolini). His arrival by train, accompanied by his wife, is a comic highlight. Watching these two ridiculous dictators engage in a contest of one-upsmanship is quite humorous but Chaplin's scripted jokes aren't nearly as funny as his silent gags. And the look of the sets coupled with Chaplin's unchanged camera style would have made the movie seem already outdated in 1940.

Despite these flaws The Great Dictator was a huge hit in its day, both critically and commercially. It received five Oscar nominations (but zero wins) for Picture, Actor (Chaplin), Supporting Actor (Oakie), Original Screenplay, and Original Score. It grossed five million dollars at the domestic box office making it the most financially successful movie of Chaplin's entire 50+ year career. At a time when the powers that be in Hollywood were afraid of directly insulting Hilter's Germany, Charles Chaplin put his own money on the line in order to do so; proving he wasn't just a funny filmmaker but also a courageous one. 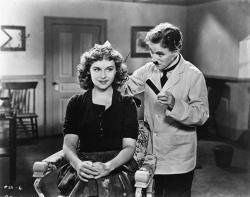 Paulete Goddard and Charles Chaplin in The Great Dictator

The powers that be in Hollywood were not just afraid of directly insulting Hilter's Germany, they actively collaborated with them. In the book "The Collaboration: Hollywood's Pact with Hitler" by Ben Urwand, he charges that between 1933-1939, Hollywood studios agreed not to make films that attacked the Nazis or condemned Germany's persecution of Jews. Urwand cites documents that show that Hollywood studios made an effort to protect the German market for their movies, by agreeing to Nazi censorship. He even goes so far as to state that Jewish studio heads, such as Louis B Mayer, willingly had pre-screenings of their films for Nazi officials so as to remove content they did not like. Although this seems ludicrous, one need look no further than current Hollywood films that refuse to show China in any sort of bad light as it would reduce the film's chances of being shown in that country. Yes Katie Morowsky, Hollywood has always cared about nothing more than making a blessed buck.

With that context in mind, Chaplin parodying Hitler and making fun of Nazis in The Great Dictator was quite controversial. It was released more than a year before the United State declared war on Germany on December 11, 1941. Although this was the first Hollywood feature film to do so, the Three Stooges actually beat Chaplin to the joke, with a parody of Hitler in the short film You Nazty Spy!, released in January, 1940. Other parodies soon followed, such as To Be or Not to Be (1942) with Jack Benny making like Hitler.

The Great Dictator is not only historically important but entertaining as well. I loved the speeches Patrick mentioned, that Chaplin gives in made up German hysterics. I also liked the line exchanges between Commander Shutz, “Strange, and I thought you were an Aryan.” and the Jewish barber, “No. I'm a vegetarian.” Commander Shutz, “How's the gas?” the Jewish barber, “Terrible, it kept me awake all night.”

I sincerely agree with Patrick about the dance with the globe balloon. It is one of the most transcendent pieces of political symbolism ever filmed. Chaplin was not just an entertaining film maker, but also an artist.

Although this film deserves much praise, it does run a bit too long. The point is well made long before the film ever comes to its ending lecture. Still, Chaplin risked much by making a talking film that poked fun at one of history’s most cruel dictators. His courage alone nearly excuses the film's flaws. Nearly. 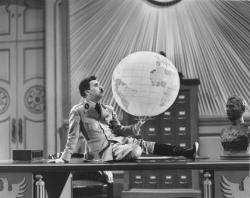 Although the Stooges did beat Chaplin to theaters with their spoof of Hitler, Chaplin began working on his version long before they started their's. Chaplin was notorious for his perfectionism and long filming times.

According to Chaplin's autobiography, the idea for the plot was suggested by British director Alexander Korda in 1937 when he remarked on the resemblance between the Little Tramp and Hitler. Chaplin then spent the next year working on a script with Konrad Bercovici, although the two would later fall out and Bercovici wouldn't receive a screen credit, but he would later sue Chaplin and the two settled out of court. Chaplin was able to get away with making this satire simply by financing it himself. With no one to answer to except his own ego, he was free to create the exact film he wanted, warts and all. When considering the production of this film, it's also important to remember that although he hadn't lived there for decades, Chaplin was English and while according to a poll of the time, over 90% of America wanted to stay out of the war, England was already engaged in the fight with Hitler by 1939.

There have been many articles and treatises written over the years about whether or not the Barber is indeed the Little Tramp character. In 1937, Chaplin himself said that the Tramp would never speak and that he would never play the character again. However, as Patrick wrote, Chaplin dons the Tramp costume as the Barber and many of his mannerisms, such as the way he stutter screeches to a stop while running, mimic the Tramp's. By 1964, when Chaplin published his autobiography, he seemed to have changed his mind about the character and freely refers to the Barber as the Tramp. To my mind, despite the fact that he speaks, this character is an evolution of that most iconic of screen characters.

I agree with Eric that this movie does run long. Chaplin milks several of his jokes, repeating them when there is no need, such as when he only has time to pose for the artists a minute at a time. It's worth a laugh the first time, but not so much the second. Or again when Napaloni's train arrives and won't stop at the right spot so Hynkel and his entourage chase up and down after it. If the running time wasn't over 2 hours these moments wouldn't stand out so much, but as is it could definitely have used a trim, but at this point in his career there was no one to whom Chaplin would listen and so he indulged his every whim. This included the final speech of course. The problem with this speech isn't the sentiment, but rather the way Chaplin is unable to weave it more subtly into the storyline.

Despite the length, I also agree that there are moments of comic genius. The scene with the balloon globe is as magical as my brother's and history have proclaimed it. Likewise, Chaplin's send-up of Hitler's speeches are also quite hilarious. Another favorite scene of mine is when the Barber and others are each eating a pudding, one of which is supposed to hold a coin and whomever gets the coin has to go on a suicide mission. Chaplin's mime of weighing each pudding, while trying not to seem as if he is, is very well done, as are the actions of the others as they try to sneak their coins onto the Barber's plate.

Chaplin was dismissive of sound and also of color film. He proved here that he could make a successful sound feature. It wasn't developing technologies that were his enemy, but his own ego. He was the master of silent filmmaking and he refused to accept that perhaps he wasn't of sound film. If he could have subdued his ego and learned from others, he might have been able to more easily carry on his successes, but he simply wasn't interested in making films on anyone else's terms but his own.

It did take courage for Chaplin to make this movie, but he would pay the price for it. His speech at the end was attacked by some as communistic. It also lead to speaking engagements where he spoke up about the need for a second front in the war to alleviate the pressure on the Soviet Union. These activities were used against him years later to help drive him out of the country. Chaplin wrote in his autobiography that if he had known the true extent of Hitler's treatment of the Jews he would never have been able to make jokes about it. If he hadn't made it, the rest of his own career may have been altered.