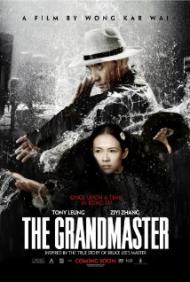 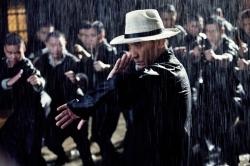 Tony Leung Chiu Wai as Ip Man in one of the film's many, beautifully filmed fight scenes.

This was Hong Kong's official submission to the Oscars in the best foreign language category. It didn't make the final cut, but it did manage two other nominations for cinematography and costume design. Given how beautiful it looks, but how leisurely it is paced and ultimately empty it all seems, I'd say the Academy made the right choice with this one.

The plot is based very, very loosely on the life of Ip Man, a Kung Fu grandmaster who taught, among others, Bruce Lee. The story begins just before the Japanese invasion of China in World War II. Ip is from a rich family. His wealth gives him plenty of time to practice his martial arts. He is chosen by the southern Kung Fu schools to represent them in a fight against a Northern Grandmaster. During the events around this fight, Ip meets the beautiful Gong Er, whom he becomes smitten with despite already being married, although their relationship remains quite chaste. The film then stretches out epic like, covering roughly the next 20 years of Ip Man's life, including his loss of wealth during the war and his transformation into a common Kung Fu teacher, albeit a very talented one.

There are several fight scenes scattered throughout the film and each one is a work of art. They are all carefully choreographed and seem more like ballet than battles. Director Kar Wai Wong loves using slow motion and he makes good use of it, particularly in the rain, which streams down in several fight scenes to magnificent effect. Unfortunately, as beautiful as they are, they are no substitute for an engrossing plot. And at over 2 hours, a more engrossing plot is what this movie is most in need of, not another fight scene, as beautiful as it might be filmed.

It is actually Gong Er's story that is the most interesting. The daughter of a Kung Fu grandmaster, she has learned the art well and even wins a fight against Ip Man. After her father's death it falls to her, since she has no brothers, to avenge his death. Her end is a sad one and the film suffers when she's not on the screen.

Although he's most famous in America for being one of the people who taught Bruce Lee, the film ends before that period of Ip Man's life and Lee is never shown. In Hong Kong and China however, Ip Man is well known in his own right and this film is just one of many filmed versions of his story that have been produced. While others have attempted for a more factual account of his life, this one is aiming for a more impressionistic telling and doesn't overly concern itself with facts, skipping huge chunks of Ip Man's life and leaving out many details that even a cursory examination of his biography reveals.

I've never been a huge fan of Kung Fu movies and those who are fans of that genre may find more to enjoy here than I did. To me this is just a beautiful looking film, but also one that runs on far too long. I was sated by the imagery after the first fight.

Ziyi Zhang in The Grandmaster

I have enjoyed many foreign films but The Grandmaster is not one of them. The slow pacing and long running time are more painful than a kick to the head. The camera constantly lingers on objects and character's faces. Those shots create a mood but they do not exactly advance the plot.

The fight scenes are gorgeously shot in slow motion. They contain some special effects that make the participants seem to float on air. Even though this movie is based on real experiences it takes place in a romantic world that never really existed. It cannot decide if it wants to be an epic love story or an action film.

The cinematography is as beautiful as Ziyi Zhang, who has been stirring libidos since Crouching Tiger, Hidden Dragon (2000). She plays a character here that we have become quite familiar with, that of the beautiful martial artist with the angelic face. She seems so sweet and demure, yet can be dangerous when crossed.

The Grandmaster is as visually beautiful as a striking orchid. It gets your attention with colorful petals and the depth of its stigma. However, like a flower, this film creates no emotional attachment. I mean, how much can you get from staring at a flower for two hours, no matter how attractive it is.

Tony Leung Chiu Wai and Ziyi Zhang in The Grandmaster.

The Grandmaster (Yi dai zong shi) is a stunningly beautiful film as well as a leisurely paced one. On that we all agree. In style it reminded me of an old Hollywood musical. The sets and the way it was shot are very glamorous and old fashioned. The clothes are equally splendid, perfectly conjuring up fashions from the 1930s through the 1950s. Mid-twentieth century wars and the ensuing societal upheaval make for a vivid backdrop even if the script barely scratches the surface of historical fact.

Scott compared the fight scenes to dance. I agree. They are like big production numbers. They are as precisely choreographed as any tap routine by Fred and Ginger. Unfortunately they are also about as threatening as a dance by Fred and Ginger. They are beautifully shot and edited but lacking in any sense of danger. This is probably the least violent martial arts film I've ever seen. Eric, I agree that the movie has an identity crisis. It can't commit to either personality. It isn't romantic enough to be an epic love story and it's way too slowly paced to be a decent action flick.

The love story never takes off. It needed some passion but never manages to get above a low simmer. Gong Er is a frustrating character. What Scott didn't mention was that she alone chose her fate. There was no family pressure brought to bear, she even went against her father's dying wishes. So she vows to never teach, marry, or have children in order to spend her life seeking vengeance. Get over yourself already.

Ip Man, meanwhile, spends most of the movie pining after her from afar. When they do get together they fight a little but mostly just talk about martial arts. He's married, she's intent on being a martyr, end of story. I never felt like I really got to know either of them. It's all very melodramatic and tragic but it lacks depth. Ziyi Zhang and Tony Leung Chiu Wai are both fine actors but they're never allowed to develop any chemistry together.

My brothers have often kidded me for my habit of mentioning Barbra Streisand in reviews for movies she isn't in. Well here I go again. The Grandmaster is set during the same time period as The Way We Were. Gong Er and Ip Man are a bit like Katie and Hubbell. The women are single-minded and stubborn to a fault, while the men both come from money and have a more laid back approach to life. But that's where any similarity ends. The Way We Were is a classic love story while The Grandmaster is merely decorative.